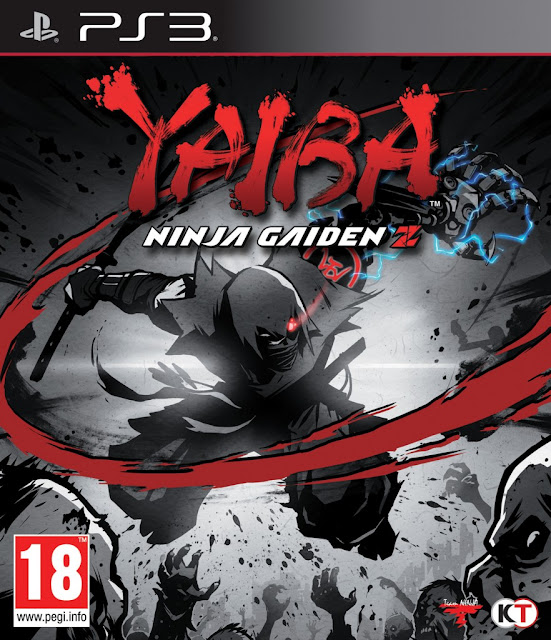 The Ninja Gaiden series is known for it's punishing difficulty but is also considered quite a solid series (with the exception of Ninja Gaiden 3) so when a kooky zombie themed spin off was announced there was much concern it would not be very good. Me personally? I have always found the series too difficult and actually a bit boring so despite Yaiba: Ninja Gaiden Z getting near universal low scores when I saw it cheap I picked it up to see for myself what it was like.

In Yaiba you play as ninja Yaiba Kamikaze who is actually a bad guy. In the introduction sequence he squares off against series hero Ryu Hayabusa but after a brief sword fight his sword is shattered and he himself is sliced into chunks. Sometime later he reawakens to discover he has been reborn as a cyborg by Forge Industries, while he was dead zombie apocalypse swept the world but that doesn't bother him, all he wants to do is track down Ryu and defeat him once and for all.  Ryu meanwhile is on a quest to stop the zombie outbreak and so Yaiba follows his path, but does the shady Forge Industries have a ulterior motive for bring the angry ninja back from the dead? 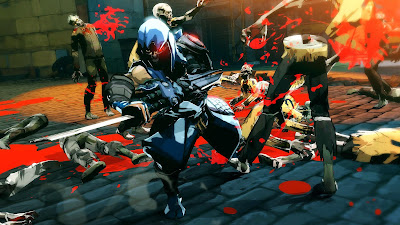 Yaiba is a cel shaded third person brawler in which you work your way through seven levels battling hordes of undead ghouls. Usually your route is interrupted by arena type areas where waves of enemies spawn, at first there are just a handful but by the games end there are around twenty zombies appearing at once. The main fodder are pretty weak but can actually be picked up and used as a weapon themselves. There are a host of stronger enemy types that take a lot more skill to defeat. Brawlers, flaming priests, undead clowns, bile spewing women and many more provide more of a challenge. Most enemies have a specific element they use to attack, elements react with each other in different ways so there is very slight brain work. For example electrified enemies if hit with bile will turn into crystal, flaming enemies if hit with electric will cause an electrical storm etc.

Aside from the combat areas there are also a lot of free running segments in which Yaiba automatically clambers around scenery with you needing to press the right buttons for him to continue, so if you see a glowing hook you press the circle button and Yaiba will swing off it with a rope, while a fist signifies a place that can be destroyed with your power fist. The locations look pretty in that cel shaded way but the game does fall to generic video game levels, you get sewers and a factory for example, there is some variation with an Aztec themed setting and a giant mobile fortress appearing later on. 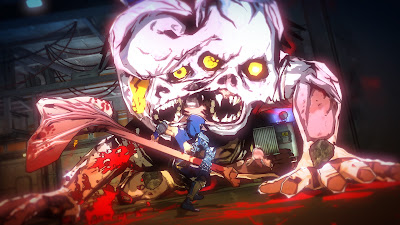 You have access to three different weapon types. First is your shattered sword which is quick but medium strength, then your power fist which is slow but does lots of damage, finally is a whip which of course has large area of effect attacks but is weak. These weapons can all be combined in large combos, there are a surprising number of different combos you can do. As you progress you get experience that can be used to buy better attacks and combos as well as make limited use weapons last longer. You also have a rage meter which when full makes you invincible and super strong for a limited time. Most enemies can be finished off in a gory finisher when they are stunned. Bosses and the more powerful enemies leave behind weapons for you to use, for example killing the bile women gives you 'Hag Pipes' which shoot out projectiles, while electrified enemies leave electrified whips, flaming enemies give you mortars etc. Bosses are not too bad, usually they later emerge as a new type of normal enemy, they include a robotic attack dog, a giant two headed baby, and of course Ryu himself who gets a whole level dedicated to his fight. The end of game boss is suitably epic and requires you to use all the element affecting attacks you have learnt up to that point.

So Yaiba sounds pretty good so far, unfortunately not everything is rosy here. The load times are ridiculous, if you die by missing a jump during the free running sections it is instantaneous, yet get killed during combat and your looking at around half a minute to bring you back, even if it is loading the exact same area you died in. This comes to a head in the level long boss fight with Ryu as he is very powerful and able to kill you in only a few hits, in total the fight took me just over an hour and I estimate about thirty minutes of that was legitimately me staring at a load screen, pretty obscene, and it doesn't help when you do die a slow motion effect is used that takes five seconds to complete. The next complaint is a weird one in that occasionally buttons simply do not work, sometimes I would press evade, or even try a simple attack and nothing would happen at all, this happened infrequently but never failed to put me off my combo and cause me a lot of damage. Talking of damage there is a block button but it is fiddly to use and a heck of a lot of attacks are unblockable so it seemed kind of pointless. The last issue is the camera which often times falls apart when you are in a large arena. It will pan back so that rather than follow Yaiba he gets smaller and smaller which makes working out where you are on screen a bit hard. 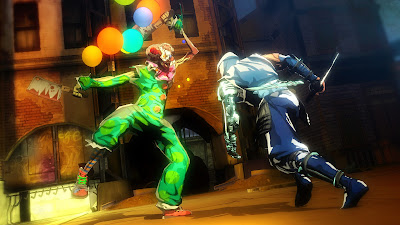 The storyline is basic but actually quite fun, you are led around levels by Miss Monday; an employee of Forge Industries, there is some fun dialogue. Visually there is also humour injected into the game, usually with the introduction of a new enemy type or when you have used a zombie to progress the level. With the introduction of the flaming zombies you get a small skit where a normal zombie goes up to him holding a cigarette hoping for a light but instead being incinerated. After solving a simple puzzle to get a train to move from it's platform the train immediately crashes, then the camera pans back to the station where a hopeful zombie holding a suitcase and glancing at his watch is waiting. New enemies and story segments hidden in the levels fill in a codex that gives explanation for what is going on. These are actually pretty amusing to read though sometimes both they and level elements get a bit smutty such as when a strip club is destroyed and it starts raining thongs from the sky, most the females in this game have huge chests also, I get the B-movie vibe gone for but it does feel a bit dated.

When I wasn't swearing my head off or watching legions of load screens I actually had quite a bit of fun here, the humour works for the most part, combat when it is going right is satisfying with some appropriate finishers and the crazy plot works despite being very predictable in terms of twists. If some of the most glaring issues had been addressed this would have been far better, as it is it's not half bad, just not a classic.