There are lots and lots of apps on smart phones that let you alter your appearance, and probably a tonne of them let you become a zombie. Modern technology always astounds me and while this app is not perfect by any means I had a lot of fun pulling faces on it.

Turned is actually the first face altering app I have ever used, I don't usually bother with things like this but the people behind it sent me an email and so I thought I would check it out. The press release proclaims it to be the first mobile app that 'harnesses augmented reality and facial tracking to give users the powers to create and send zombie videos with photo-real special effects in real time'. It goes on to say the technology has been used for Hollywood special effects in films such as Godzilla. 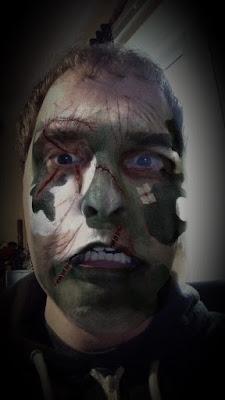 When you first load up the app you are given the option of being a zombie or a survivor, following on from this the app scans your face and you are ready to create. First I tried the survivor section. You get to choose from a variety of cuts, scrapes and scars for every part of your face, if your particularly lazy you can press the randomise button. The effects look pretty cool, there is sort of an over lay on your face, it responds to your facial expressions pretty well though any sudden movement will confuse it.

Next I tried the zombie side of things, this has a different set up effects such as coloured eyes, bites, scratches and blood and shadowing, again it was pretty fun to mess around with for a few minutes. With this I tried a small video, it is simple to use and the face tracking works pretty well.  There are over 1000 different combinations that can be used, a fair chunk of these are locked behind pay walls but what you get for free was satisfying enough for me without the need to dig into my wallet. 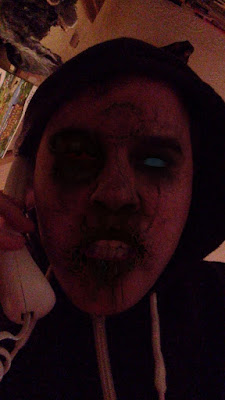 The app is free so and isn't covered in darn adverts so it is well worth a check if you have a few spare minutes, it is also simple to use and so stress free. I'm not going to give a score to this blog post, more just a public service announcement to tell you Turned exists, never too many zombie things in this world.
Posted by Daniel Simmonds at 11:13