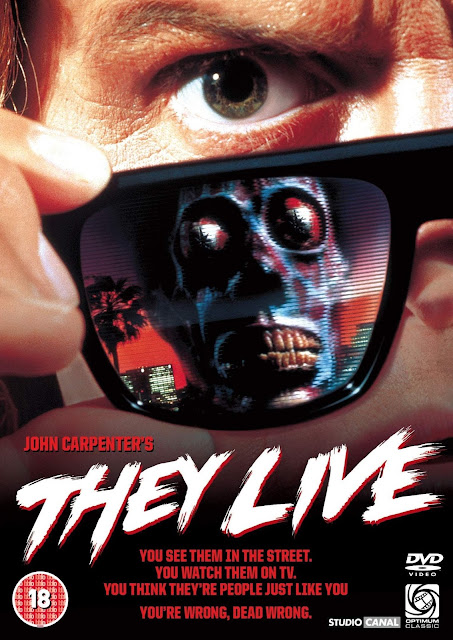 As mentioned in one of my rare general blog posts I am going to be reviewing a horror film every two days for the month of Shocktober and I'm kicking things off with John Carpenter's They Live as a tribute to wrestling legend Rowdy Roddy Piper who of course sadly passed away earlier this year.

Piper stars as Nada; a homeless drifter who arrives in town looking for work. He befriends builder Frank (Keith David) who finds him a place to stay in the homeless community. While watching TV one night a strange broadcast takes over the airwaves, in it a man proclaims that society is being brain washed, this gets Nada interested and he soon discovers a strange group operating nearby that are related to this strange signal. He gets his hands on a bizarre pair of sunglasses and discovers to his horror when he puts them on that all is not as it seems. Where before billboards and advertisements were full of images and colour now they just have stark words such as 'Obey', 'Consume' and 'Marry and Reproduce', even worse it seems about one tenth of the population are actually hideous alien creatures living silently among humanity... 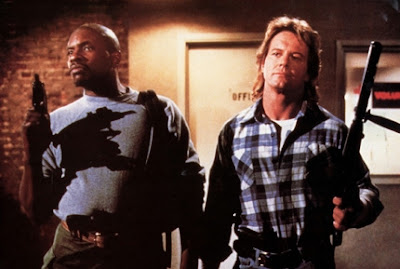 As with many of John Carpenters films this is iconic and features a lot of memorable scenes, the most famous is a quote from Nada which the Duke Nukem series of videogames took "I came here to chew gum and kick ass...and I'm all outta bubblegum" as he enters a bank to open fire on the aliens. From the start to the end this is near action all the way through. Piper is an interesting character in that he is a bit hot headed and doesn't really think anything through. Upon finding out about the secret brain controlling his first thought is to try and kill all the aliens he can find landing him immediately in hot water with the authorities.

They Live has a quite a heavy handed message about anti consumerism and how the elite control the masses, dictating what they should aspire to in life, and the media brain washing the general public. It was originally conceived as a response to Reaganism but applies today as the message is pretty universal.  The ruling classes and shown as either alien's in disguise, or even worse knowingly working with them in return for fame and wealth. Nada is the antithesis of this, a rebel who just seems to have been waiting for an opportunity to fight back, his name meaning literally 'nothing' puts him in the stance of the everyday man rebelling against his lot in life. The character of Frank fits well with Nada coming across as more sensible and cautious. 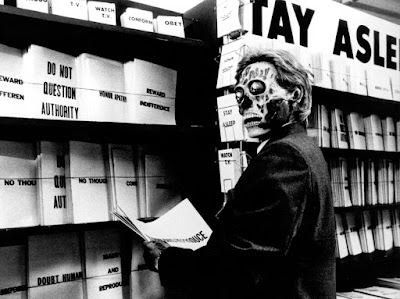 Much of the film is either fights or gun fights, yet despite the high body count there is no spilt blood, the many faceless police and guards mown down with hardly a thought. There is an interesting plot device that Nada really does not want to kill any actual humans, so he picks and chooses his victims on what they look like, merciless towards the oppressors and merciful to any humans it adds some spice to the film. When Piper does get to physically fight he incorporates some wrestling moves which was a nice touch, there is one ridiculous fight early on that goes on for about five minutes and all over wearing sunglasses, really silly but then They Live often has a fun side to it. From his insults to the aliens to over the top action such as when he is bottled and then thrown out a second storey window only to turn out fine; all silly and fun.

The plot is very simple, concerning destroying a radio transmitter that hides reality from the populace, but it goes along at a nice pace even if there are some crazy leaps in logic. How the resistance keep getting in contact with Nada and Frank is never explained, while one characters motivations make not much sense really. The effects are not bad, when seeing the 'real' world black and white is used which fits with the stark look of the messages, while flying drones and magical teleporters all look good for the time. There is a sense of paranoia and urgency that persists throughout, trouble seems to follow Nada everywhere he goes, it has a slight similarity with Invasion of the Body Snatchers, you get the sense that the main characters are in constant peril. The ending is a bit abrupt but worked giving a sense of closure and accomplishment. 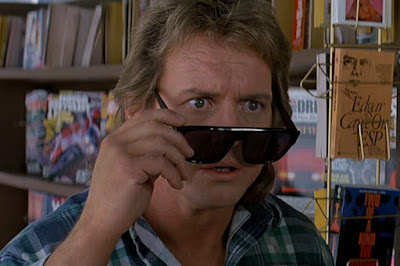 They Live is a John Carpenter classic and Piper does well in his role, it is throwaway mindless fun but there is an interesting if obvious message here and it never gets boring, not even during the five minute long fight scene!