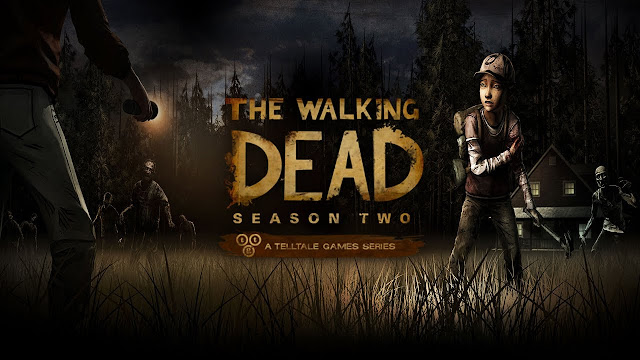 I really loved season one of Telltales The Walking Dead adventure game, it made you care about the characters, especially the relationship between Lee and his ward Clementine. That game ended relatively optimistically and so I never felt a sequel was needed. Finally after putting it off for a year I played through season two, but should this new chapter in Clementine's life have been left untold?

It is nearly two years since Clementine's journey with Lee and after a series of misadventures she finds herself with a new group of survivors. Their plan is to head north as there is rumour of a settlement named Wellington which is walker (zombie) free. However she soon finds this group are being hunted by a ruthless man named Carver and his cronies for reasons unknown and soon she gets caught up in events. 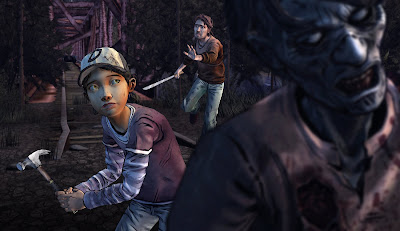 Like Season one this is split into five chapters. During my play through of that one I did a review for each of the chapters, but playing through this in the space of a week I'm not going to do that. On the one hand I can see how the season works as a whole, but on the flip side I pretty much cannot talk about what happens at all as anything I say will be a huge spoiler.  The first season called for some tough decisions that shape how the story pans out. I had thought there could not be any interesting choices left to make but boy was I wrong.

Clementine was a character who you couldn't help but want to protect in season one, she was the only truly innocent person, I worried that playing as her for season two would take away some of that. As Clementine I still wanted more than anything for her to be safe, it is easy to say that season two really is about the loss of her innocence, she is jaded, world weary and forced to make so many tough decisions, witness so much horror and terror that you lament her lost childhood. You spend much of the first chapter locked in a shed with an untreated nasty dog bite, the new group you discover believing you have been bitten by a walker refuse to help you. This culminates in the poor girl having to find some equipment to self stitch up her arm in a gruesome sequence. This continues throughout, by the end of the fifth episode Clementine has been slapped, punched, kicked, rifle butted, and even been shot, her status as a kid seemingly lost on everyone around her. 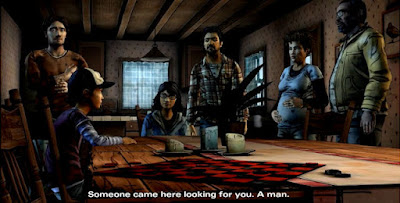 Spoilers for the first season here but that ended with you going to the protection of two survivors, it seemed a bit silly at the time and a bit of a too rosy ending yet season two starts and within the first ten minutes one of those is dead and the other vanishes never to be seen again, I don't understand why they removed these people so swiftly after making an effort to have them arrive back from the dead previously, especially when one of those is a pregnant woman and she gets replaced by another pregnant woman. The characters here are ok, I hated them at first but it is credit to the talent of the writing team that eventually you warm to them. They again feature traditional survivor types; you have the brash coward, the leader (in the form of Luke) as well as the peace maker (Alvin). Interestingly one of your group has mental health problems and a lot of the earlier episodes give you options on just how to deal with this girl.

The biggest problem I had throughout is that everyone looks to Clementine to deal with the problems the group encounter, she is called upon to make the hard decisions, when someone turns into a zombie it is left to her to sort things out. Luke may be the defacto leader but Clementine is the one forced to make the real decisions, it is her who the blame is placed on whenever things inevitably go wrong. I get that they are trying to make you as the player feel the centre piece, but in terms of story Clem is just eleven, it is ridiculous that the squabbling, childish people you are with look to you when you should be the one getting to take things easy. The worst example of this is early on when approaching an unchecked building Alvin takes a seat and tells you with a smile to go search this (possibly zombie infested) building for food, then he tells you to hurry up as he is hungry...what the hell? It got me mad at times, and culminated in a finale at the games end where I purposely chose what turned out to be a bad ending due to just having had enough of the pathetic fighting and behaviour of the group. 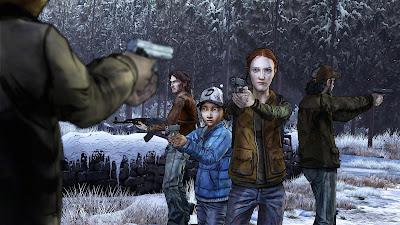 Initially season two played out a lot stronger than first one, it all takes place in much more of a localised place, mostly woodland, the story was more focused and less like the sprawling road trip that season one was. The first three chapters in particular flow so well that I couldn't help but be caught up in the excitement of it all, even the fourth was very well done, but things took a bad turn. A lot of harrowing events take place, a large percentage of the characters you have met are dead by the games end, most of them by your own hand. By the fifth chapter I really began to wonder how the game would end satisfactory, Telltale seemed determined to make the game ever more bleak and depressing. Unfortunately this downward trend continued until end credits, I get it's a brave move to make things so dark, but there is a thing as too dark, I know I got the bad ending out of the three available but this game is all about making decisions you feel are for the best which inevitably go wrong. As well as the grim self stitching part I got to see someone get their face caved in with a crowbar as well as get to hack off someones arm, so the penchant for body violence has not been diminished at all.

This is much more an interactive story than what came before, you get to choose dialogue options, quick time events happen and you get to explore your surroundings, but all the puzzles have been removed, the gamey parts are gone. I think that was a good decision as the story telling here is top notch, the miserable last episode actually worked a lot better than season ones final chapter which just seemed to exist purely to kill off every surplus character.. Occasionally Clem gets to mention Lee, those moments were great, while the surprise reintroduction of a main character from the first game believed dead was a nice surprise. It's also a nice change playing as an eleven year old girl, she is not as combat ready as Lee was so at least for the majority of the game her melee attacks end with her weapon getting stuck in enemies and her gun shots take a few bullets before she hits the zombies head. 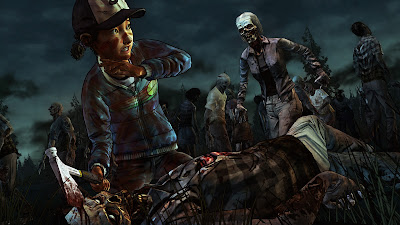 The music is fantastic, each chapter ending with an appropriately selected song, while the voice acting is also pretty damn good. The engine also seems to run more smoothly though I had a bad initial experience when about twenty minutes into the first episode the game crashed and refused to re load. The choices you get to make are pretty heavy at times, though there were a few that were so bland that I was surprised to see them crop up in the statistic screen at the end of the chapter.

This would have scored higher if it were not for the supremely hopeless ending, I left the game legitimately feeling depressed and bummed out. Mechanically and dare I say it even story wise this is stronger than season one, Clementine is a great character while many others have layers to them, more than it first seems for sure. Carver is not a great antagonist though seeming too cookie cutter generic bad guy with no good at all to him, while there are no characters as darn likable as Lee. A great interactive story that is an essential play if you liked the first season, just a shame it all ends on such a gigantic downer.

Posted by Daniel Simmonds at 16:26