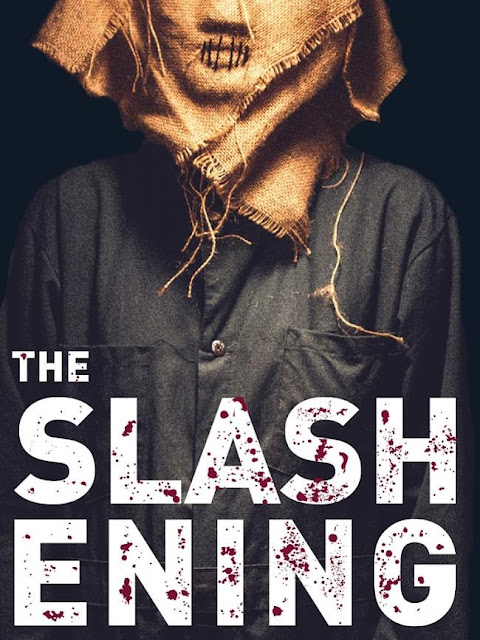 When I first came up with my list of horror films I would be watching for Halloween 2015 I had some breathing space to swap out films for ones I got given for review. Indie comedy horror The Slashening is one such film. This comedy horror comes from the same people who did Fear Town, USA and features many of the same actors, despite being unrelated to it there are even some actors playing the same characters.

Lucy and her friends are having a get together at Eva's home (as her parents are away) in order to help Lucy get over breaking up with her cheating boyfriend Brett. Early on in the evening a cop calls warning the girls not to leave the property as there is a killer on the loose, yet even staying in the property becomes a bad idea as one by one the girls and their friends are brutally killed off by a hooded figure, but why is the killer targeting them? 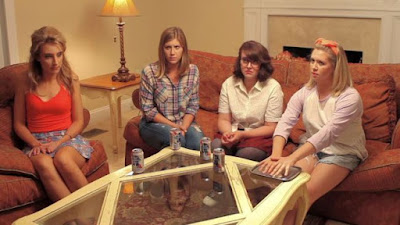 I thought Fear Town, USA was pretty hit and miss, it had it's moments but far too much of the humour was based around sex jokes, unfortunately The Slashening relies even more on jokes about body parts for its humour than that did, so a lot of what was meant to be funny left me cold. The first forty five minutes there is pretty much nothing but this terrible humour, I found it hard to be anything but bored. This is a real shame as the actual humour revolving around the horror aspect is mostly quite on the mark, it pokes fun well at the slasher genre. Showing the impracticalities of writing messages with your own blood (finally someone has done that joke!), a montage of near identical looking pizza delivery guys getting killed as they try to deliver food that had a great payoff, and bringing attention to how the killer in slashers never seems to feel pain also was not half bad. As an aside it was good to see a slightly larger built character who is not once made fun of due to her size, felt surprisingly fresh.

The plot this time around is a lot more cohesive, rather than have many different sub plots there is just the one collection of characters. This more focused approach to story telling works better in general but there is much less to what happens. There is a slasher on the loose who wants to kill the girls, that's as deep as it gets, while many horrors have even less than that for a plot it is still a shame there wasn't more to get your teeth into. The blood effects vary between looking terrible and looking not bad, while the actual death scenes for the main characters are all inventive and unique, such as one character who has their face repeatably smashed into a mirror and, another who is bludgeoned with a mallet after a long funny scene of him leaping around in fright. The slasher wears surgical gloves, a boiler suit and a straw mask, doesn't look too bad, while the films main theme reminded me a lot of John Carpenter's music style, kinda like The Fog. 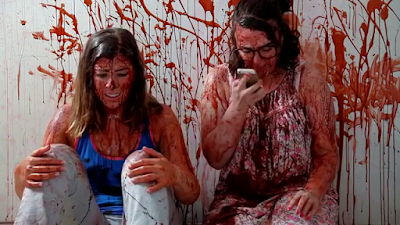 The film was written and directed by Brandon Bassham with a budget of just $6,000 with the actors again being from the Upright Citizens Brigade Theatre in NYC. None of the acting was awful, it is all acceptable and they fit the roles they are given. Patrick Foy reprises his role as Pat and stands out as the passive good guy, he has some great lines, the best part being when he gets into a meek disagreement while playing an online video game with someone. The fight he gets into with the killer is one of the best parts of the film also due to the use of repetition.

The Slashening certainly picks up in the second half, but by this point my interest had faded slightly, if there had been much less jokes about sex and more jokes around horror then this would have benefited a lot. A mixed bag then, half dull and half enjoyable, no fault with the acting or directing itself, just wish the humour had been more for me. The Slashening is available from Amazon as well as RoKu now, though the Amazon version is apparently heavily censored.