The People Under the Stairs (1991) - Horror Film Review 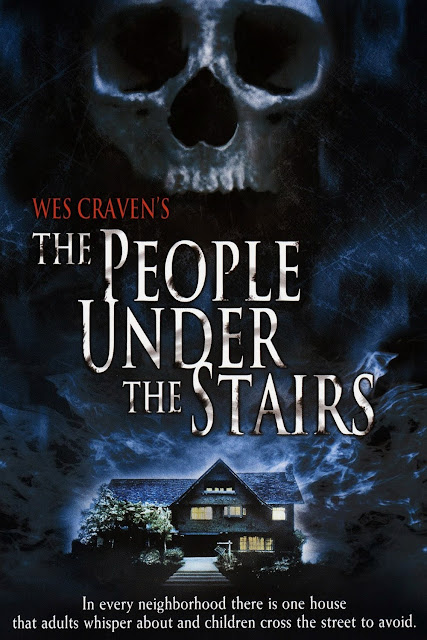 This is another film I have being meaning to watch for review, alas again due to another iconic person sadly passing earlier this year. The People Under the Stairs is written and directed by horror legend Wes Craven and is quite the under rated classic. The general message of the rich taking advantage of the poor coincidently has a bit in common with my first Halloween film They Live.

Learning on his 13th birthday that he and his poor family are going to be evicted by their cruel landlords unless they can pay rent by the morning Fool (Brandon Adams) reluctantly teams up with family friend Leroy (Ving Rhames) and his partner in order to rob the landlords house as it is known that they have an expensive coin collection there. However once in the giant house Fool soon ends up all alone as it turns out the landlord couple are psychotic and don't take kindly to intruders. Not only are they and their vicious dog out for his blood but the house is full of deadly booby traps and all the exits all locked up. In Fool's search for an escape he comes across the couples terrified daughter Alice who decides to help him out, and also discovers...the people under the stairs. 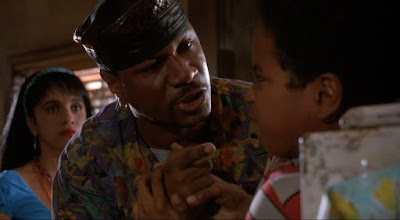 This is quite a strange film and what at first seems like horror soon shows its comic side, there is a lot of black humour here giving the film a wacky tone to it. Fool is a very likable wise cracking kid who at times reminds me of Kevin from the Home Alone films. The couple are very eccentric and played with relish by the actors, first up is Wendy Robie as Mommy, whose desire to control is reflected in all her actions. Her daughter Alice is pretty much a play thing for the woman who dresses her up in home made clothes. Daddy; played by Everett McGill is even more insane. He wears a full body gimp suit to hunt his prey in and is very brow beaten, always seeming to do the wrong thing to comedy effect. The man bears the brunt of the chaos Fool throws at the two, often making comedy noises such as when a brick is dropped on his head from above, or as various objects get smashed over him.

A lot of the comedic elements nonetheless don't get in the way of what is an exciting film. The house is fantastically designed looking like an over the top fun house. All over the house are secret compartments containing ridiculous weaponry, trip wires trigger stairs to turn into ramps, there are secret trapdoors, fake walls and electrified door handles. The whole notion is just so fantastically silly, such as Roach; a boy who lives in the walls and causes no end of trouble for the landlords who just can't seem to catch him and the cellar where zombie like boys live, fighting each other over scraps of human meat, this all bizarrely reminds me of the ace Fighting Fantasy book House of Hell. 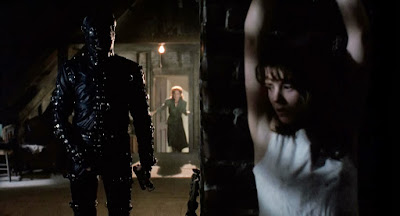 A brief intermission here...don't you just hate it when the words just don't come out your head right? Kinda getting that with this review! Anyway so The People Under the Stairs has the feel of Home Alone if the consequences of Kevin were more realistic, it is a joyous film but every now and again you get reminded that you are in a horror film such as a gruesome scene where a man gets gutted by Daddy in the cellar before being dumped in an open sewer. There is not too much blood and gore but when you do see it, it usually looks the part with a host of decent effects used. The acting throughout is all stellar stuff, it was fun to see Rhames in a younger role though by far the best performance was by Prince the dog who is really a talented dog actor (well it is kind of cheating as his role was actually performed by four different dogs).

While the plot is simple it actually has a really exciting final third, for once the film gets to a point where the character has achieved everything he set out to do and is away from danger but his conscience draws him back for a thrilling finale, the brief down time his success brings was novel as usually for films of this type the resolution only comes at the end. By the credits I was grinning like a loon. This is a solid film and very nearly earned a nine, just missing out due to some one dimensional characters at times and some one liners that were not really needed. Also it cannot seem to make up its mind if it should be horror or adventure. Still this is an essential Wes Craven film, may he rest in peace.

Posted by Daniel Simmonds at 11:25