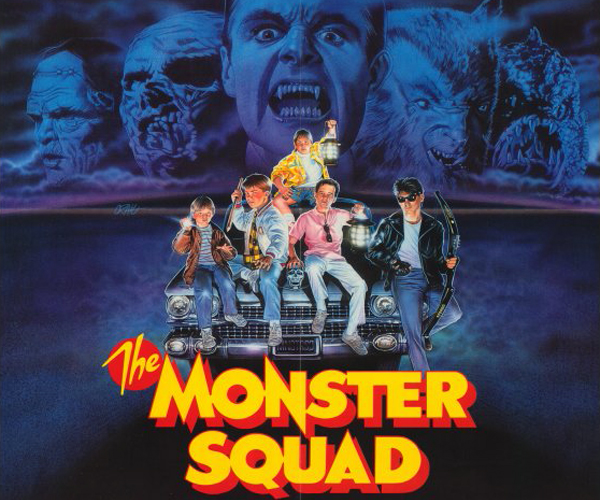 I haven't seen The Monster Squad since I was a kid, I used to make my parents repeatedly rent out the film from the local video rental shop, it appealed to me back then because of the amount of different classic movie monsters it features. I have to say watching it now I had no idea it contained such a high body count, as well as a fair bit of swearing!

Every hundred years at the stroke of midnight a magical amulet is able to open a gateway to Hell that can suck away all evil from the world. Van Helsing fails in his attempt to do this in the nineteenth century and so in modern day (well the 1980's) a band of monsters led by Dracula (Duncan Regehr) arrive in America to prevent the amulet from being used once again. This magical device just so happens to be located in a small town where a group of social outcast kids obsessed with movie monsters live, when they learn of the arrival of these evil beings they formulate a plan to stop them. 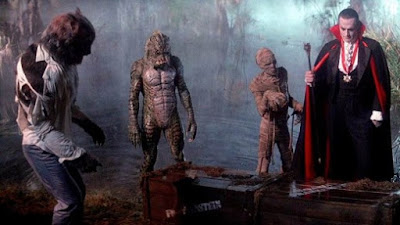 Rather than made up creatures all of the five monsters are those based on classic Universal horrors. As well as Dracula there is the Wolfman, Frankenstein's Monster, a Mummy, and Gillman, these five pretty much conform to the standards set, so Dracula for instance is repelled by garlic, while the Wolfman can only be defeated by silver bullets. Seeing these in modern day is quite a fun experience as they look out of place being in their traditional garbs. Regehr in particular is a stand out character, his vampire oozes menace and is an intimidating screen presence leading to some great moments such as when he effortlessly fights off attacker after attacker in one scene. The Wolfman has some depth to him as in his human form he is a tortured soul who Dracula has to drug. Frankenstein's Monster is also a surprisingly deep character who only reluctantly follows his masters orders. It is a shame that the Mummy and Gillman barely have any screen time at all between them.

This is very much an eighties film; a group of odd ball kids battling against an evil that no one else believes in, it actually brought to mind The Goonies, especially with Frankenstein's Monster who is pretty much the exact same character as Sloth. Being an eighties film they also see time to throw in a montage sequence as the kids prepare for their battle with the monsters. As I mentioned there is quite a bit of swearing here, but it's the violence that surprised me more. A lot of people die in this film both on screen and off, it can be quite shocking at times (well in respect of being in a kids film), Sean's cop Dad's partner who spends the entire film being a comedy character is without warning blown up with a stick of dynamite for example, kinda funny how ineffective he is to be honest. At one point the Wolfman is blown to pieces, his bloody remains are scattered about an alley before reforming, looks awesome but I wonder how that didn't bother me as a child! There is quite a lot of blood, even when the vampires get staked there is a lot of crimson that appears. 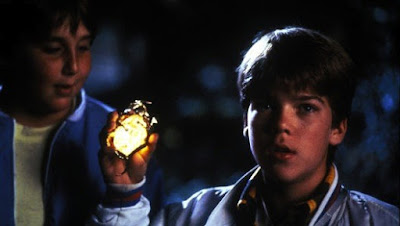 The special effects in general are all quite great, the Wolfman's transformation sequences are fantastic, as is a fun sequence when the Mummy gets unravelled, but there are also some less great effects. The mentioned portal to Hell looks pretty dodgy, while some of the sets look very fake, a statue with a secret door attached to it in particular looked like it was made out of cardboard. For the most part the effects are pretty solid, some great explosions, and even a couple of car chases thrown in for good measure.

The cast are a likeable bunch even if they are copied from The Goonies (obligitory fat kid, the cool kid etc). There are also some leaps in narrative logic, people just happen to be in places at the right time, or have knowledge they really should have no reason to, while there are a couple of weird sub plots that don't add anything to anything (one in which Sean's parents constantly argue about the amount of time Sean's Dad has to work late just goes nowhere at all). There is also a giant sub plot that has literally no reason to exist in the slightest, really bizarre it even exists. However when the finale comes it is suitably dramatic and the highlight of the film, those monsters really know how to appear powerful. 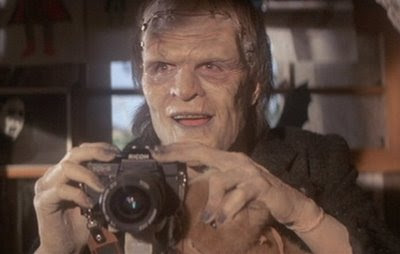 The Monster Squad is a lot of fun, and Regehr is in a role made for him, the kids on the whole don't annoy too much and each have their moment to shine. A more cohesive plot and a bit more focus on some of the lesser used monsters is all I would change really, maybe the cheesy end song as well!