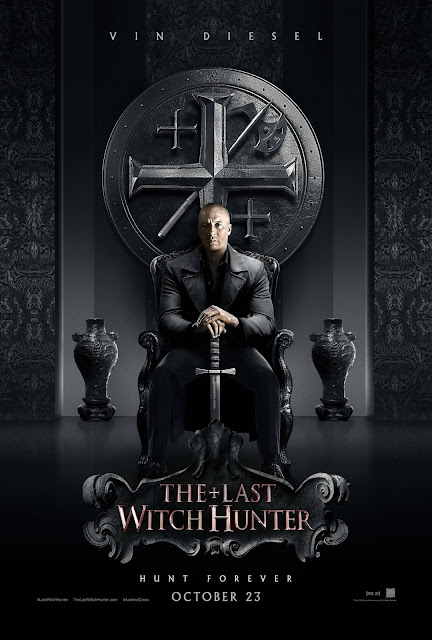 Diesel stars as Kaulder; a witch hunter who was cursed by a witch with immortality, and so for the last 800 years he has been roaming the planet doing what he does best. In that time a truce has been made between the witches and the hunters, they now have their own council who work to ensure that they don't interfere in the world of man. When Kaulder's trusted aid (Michael Caine) turns up seemingly dead he realises that someone is working to destroy the fragile truce and bring doom and destruction back to mankind, and so he teams up with his new aid (Elijah Wood) and a friendly witch; Chloe (Rose Leslie) in order to stop this plan. 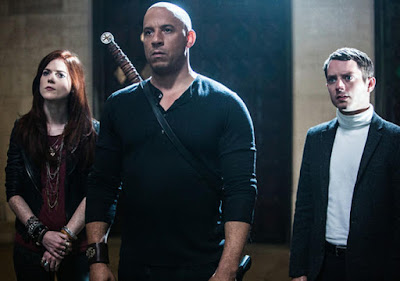 The special effects on display here are really quite good, they impressed me through out and made what is at times quite a dull film more bearable. In particular the effects used for the antagonist; the Witch Queen look fantastic, she is a being who seems to be composed of the bark of a tree and is able to summon swarms of flying insects. Also to be commended is the acting, while the script is hardly great at least the majority are able to say their lines with some degree of believability. I don't know how they managed to get both Caine and Wood to be in this film, Caine unfortunately is type cast into the same character he seems to always play nowadays (Inception, Batman etc), while both him and Wood have very little screen time. For the most part it is Diesel and Leslie who are the main characters. Kaulder is basically a kinder Riddick but he acts the same way; doing super cool things and having a reputation as some one not to mess with. As is the way with his films some of his dialogue is so stupid and he says it so earnestly that on occasion I couldn't help but laugh out loud.

My biggest complaint with The Last Witch Hunter is that the plot is just so very, very generic, I have seen this same film so many times before that I just found it hard to care at all, it is all so predictable, the story arc is so obvious to see that at around two thirds of the way through I really had had enough, I just could not stop yawning and just wanted it to end. The first third goes along at a decent enough pace, it sets up events well, it's just a shame that the whole second part is dull as dishwater. Kaulder and Chloe go from place to place investigating just who is responsible for dark magic being used, each place they go to they are inevitably tricked by whoever their questioning (despite Chloe saying at one point that Kaulder is the best person in existence for detecting lies) and so must escape a pathetic little trap which they always do no problem. The final third is the battle to stop the Witch Queen from carrying out an apocalyptic plan and it was probably the best part but I was so drained by the meandering middle that I just didn't care about it. 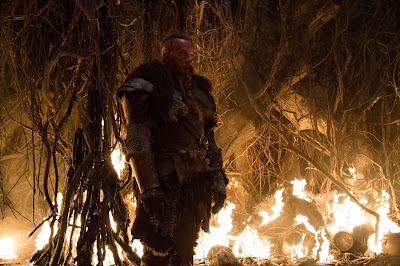 Being 800 years old you would think there would be a lot to Kaulder but he does come across as a bit of a blank slate, there are some decent flash backs to his pre immortality self which use great effects to combine the real and past worlds. The in between time however is glossed over, mentioned briefly such as inferring he had at one point in his long life met Napoleon, Stalin and Hitler(!), while when he plays some classical music Caine's character asks him if he is feeling nostalgic. Apart from this though he doesn't seem like an 800 year old being. It is interesting that Diesel partly based Kaulder on an old Dungeons and Dragons character he used to play as! The evil witches are not bad as enemies, there are some kind of cool little twists later on, though a heel turn while unforeseen was hardly a bold move in terms of surprises.

I expected far more action than there actually was here, for the most part it is just investigating with small little action pieces thrown in. If this wasn't so completely generic this could have been something half decent as the effects really were great looking. If the characters had been more interesting also this could have shined more but they are bland, Leslie's Chloe in particular while a strangely attractive lead just had the most traditional role imaginable. Hard to recommend but this is inoffensive enough, maybe if your a fan of the Riddick series there will be something worth watching here.