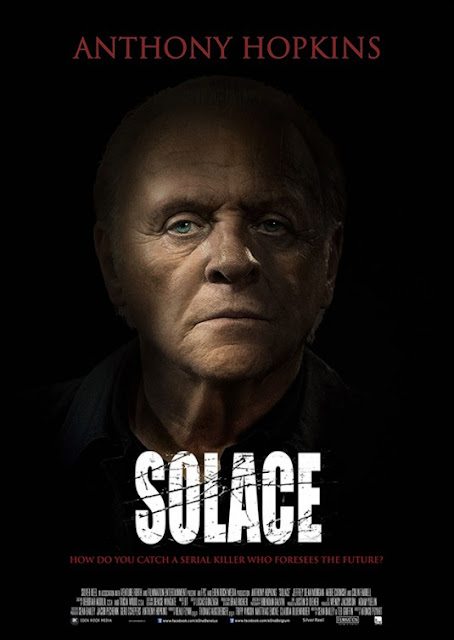 I had been debating whether to see Solace as a potential film for review for quite a few weeks now, I finally decided I would and so headed to my local cinema for the very last showing of this film. Now this is not horror, instead this is a straight thriller but it has some elements that felt appropriate, also as part of my Halloween mission I am needing to watch a lot of films so that i can continue to review one every two days.

Anthony Hopkins stars as John Clancy; a psychic who is called upon from his old friend Agent Joe Merriweather (Jeffrey Dean Morgan) in order to help him and his partner Katherine solve a series of bizarre murders where the killer leaves no trace. Clancy at first refuses to help having given up his work but something among the case files he is given compels him to travel to the city to assist. It is not long before Clancy reveals that not only is the serial killer they are after also a psychic, but that he has far better abilities than himself and is able to know exactly what the people hunting him are going to do, and that the trio will be in grave danger should they continue their hunt. 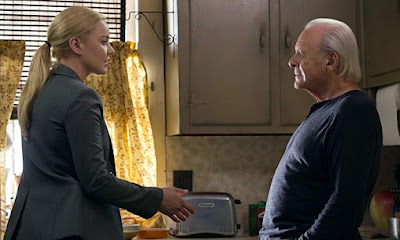 Solace is a thriller through and through, I am always one to compare films to other of the genre but this did really come across very Se7en like but with much more of a friendly heart to it. Like John in that film this killer is far more interesting when you don't know who he is. He knows exactly where the detectives are going to be, leaving notes for them to find, early on he leaves a note which has the exact time the trio show up at an apartment at, later on this foreknowledge is put to much more chilling use when he leaves a pre recorded video message where he speaks directly with one of the detectives, even following her with his eyes when she paces up and down the room. This is a hyper exaggerated version of psychic abilities, the two psychics are able to pretty much tell everything about a person just by touch, or by being in the vicinity, They make an attempt to explain away the ability via scientific means but still comes across as slightly silly. This does lead to a great scene where Hopkins becomes uber creepy as he humiliates Katherine by revealing secrets from her past one after the other.

It is almost disappointing in a sense when the killer is revealed as he is played by a famous face, there is no complaint with the action, it is all solid stuff, it's just that I've seen him in so many films already that I couldn't help but recognise him and so the mystery of just who his character was felt reduced. Kinda silly saying that when Hopkins is obviously a famous actor, but Hopkins is pretty much fantastic in any role he gets given. The plot goes along at a decent enough pace with a few red herrings thrown in here and there, it is all typical serial killer thriller stuff with car chases, on foot chases and investigations into the killers victims to establish links etc. For a change though when you discover the killer's motivations they are something you can almost sympathise with, though it is a twisted sense of duty the killer is performing. 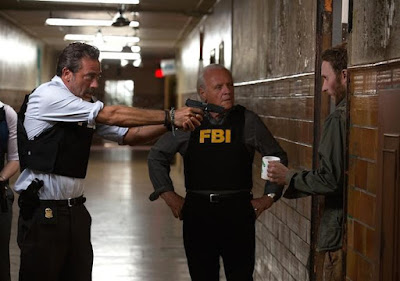 Where Solace goes differently is in the oft mentioned psychic parts, visions are shown through a series of fast flashing art house style images, the visualisation of the abilities portrayed for example as Clancy seeing every possible route the man he is chasing could have taken (as he stands in place multiple versions of the same man keep walking past going different routes.  Visions of the future play out much like in the Sherlock Holmes films with possible futures playing out often ending in failure. On at least three occasions Hopkins dies on screen only for it to then be revealed as just a possible future he was witnessing in his mind.

There is a lot of sorrow and dealing with grief as key themes, the killers motivations, Clancy's past all look at the topic of justified killing and doing the hard thing to end a persons suffering. It gets sad at times, some plot twists that I was not expecting, and a finale that descended into near pure art house; Hopkins jogging around with past conversations echoing in his head as time pauses and fleeting images flash past, it nearly got too much, felt like it was towing the line of all getting a bit too surreal but was cool in a trippy way. 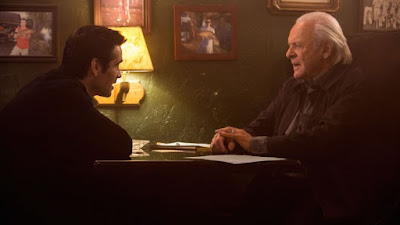 When it gets down to it I thought this was a decent enough thriller that had an interesting spin even if it did seem a bit daft at times. A killer who can see the future with near perfection was an interesting concept which made me interested to see how he would finally be caught. I love that the reason it is directed in such a way as to give you only brief glimpses into the future ties into Clancy whose abilities are far more patchy when it comes to that.

Without solid acting Solace would have been impossible to take seriously, as it is though there are some great performances (even though Clancy and Merriweather don't seem as close friends as the script suggests) that manage to bring some slight believability to a daft idea. I enjoyed watching this, though it is not destined to be a classic. It just about managed to avoid falling into nonsense.