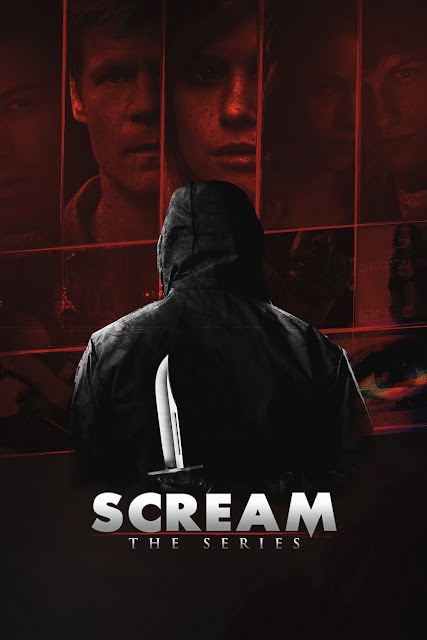 For a few months I had been hearing people go on about how great they thought the Scream TV show was, then one day it turned up on UK Netflix and I just had to see it, and from pretty much right away I was hooked. I had thought the show would be a sequel to the often dodgy films but was interested to find this is actually more of a reboot telling an original tale.

After a cruel and embarrassing YouTube video goes viral the perpetrators; Nina and her boyfriend Tyler end up dead at the hands of a hooded figure wearing a creepy surgical mask. This is only the tip of the iceberg and soon Nina's friend Emma (Willa Fitzgerald) finds herself at the centre of a sick game. An unknown person keeps calling her, threatening her, dropping hints about her family's secret past, while one by one her friends turn up dead. An incident in which a disfigured boy went on a killing spree fifteen years previous seems to be the key to the mystery of just who is trying to recreate the terror. 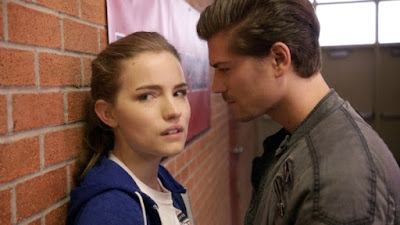 Scream is a lot better made than I had been expecting, it looks quality and has plenty of great looking blood and gore effects throughout. The kills themselves when they come are all pretty inventive, and really quite gruesome, it isn't just all people getting stabbed (though there is lots of that). While an original story this does share a lot of common elements from the popular films. First off obviously is the killers garb, black hooded figure with a mask that while surgical in nature does look like it's expression is locked in a scream. There are all new characters but they include among them familiar ones from the films such as a reporter woman, an ineffectual policeman, and a horror film geek who almost becomes the shows narrator as he explains the tenants for what is to come, seeming quite self aware; "Just so you know I don't want to split up, I'm not three days from retirement, and I will most certainly not be right back" he says at one point as him and his friends split up whilst looking for the killer. The show has the same nods to the horror genre as the films did, early on for instance a character comments that a slasher film would never translate well into a series.

There are ten episodes in season one (a second season confirmed) and for a good while each and every episode is better than the one before. I think it is maybe the fourth episode that had the biggest impact on me, a main character killed in the last place you would expect someone to be murdered. The twists in terms of who lives and who dies always shocked, it doesn't help that many times the victims are left alive, only to be inadvertently killed by traps set up when a would be rescuer appears. Towards the end of the season the show goes down hill a bit. Up to around the seventh episode the script is so well done that you just do not know who could be the killer. Nearly everyone has at least a couple of throwaway lines that casts doubt on them, or does something that seems shady. With it nearly always being two characters being the killer in the films I fully expected this here, and to be honest it seems quite likely this is the case here as even though things are semi wrapped up with a proper conclusion there are a whole slew of unanswered questions. While Scream did a decent enough job of keeping you guessing, the revealed killer was actually my number one suspect and so was a bit disappointing. 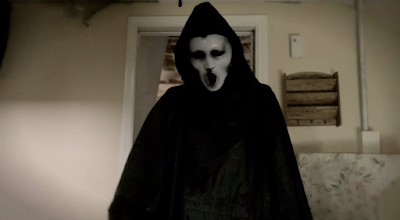 The acting is not bad, the characters all pretty stereotypical, nerd Noah was probably my favourite character, while Emma is likable and goes through a lot. In films it seems people get over their friends deaths within minutes of it happening, here it seems to be a general rule that it takes around three episodes before someone seems completely fine and normal again. There is a lot of grief and sorrow in Scream, I loved how that wasn't glossed over, but instead you got to see the pain these deaths cause the survivors. Jake was probably the worst character in the show, he was meant to be the comedy idiot guy but he acts so stupidly throughout that I just couldn't believe he was being serious, even when he turns up stabbed at one point I couldn't help but think back to Scream and think maybe that was purposeful to shift suspicion. I have to also mention the character of Brook, she at first seemed like a nasty spoilt air head, but her arc is actually quite well handled making her one of my favourites by the end.

The killer communicating via phone is brought up to modern day with the internet and mobiles playing a much bigger part. The killer uses a voice distortion device to hide his voice (just like in the films), while he has managed to put in software that has hacked every ones mobile phones and laptops, so he can send texts from anyones phones, record people at anytime and generally be a nuisance. I never understood why anyone believed the messages they were getting were real when they all knew the killer had this ability (and uses it to set up kills at several points). Plus if it terrifies Emma so much constantly getting creepy calls from the psycho why does she keep her phone switched on? It seems that's his only way of communicating so his plans would be ruined if she had just done that. 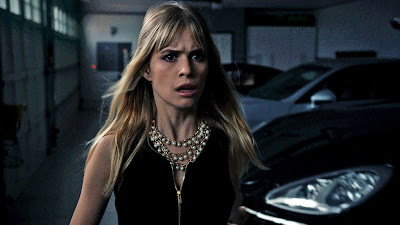 For the most part Scream is utterly addictive, quite a few times I found myself unable to stop myself from watching the next episode due to huge cliffhangers, yet for me the show did fall down a bit towards the end, especially with the hammy over the top acting of the killer once they had revealed themselves, never understand why the reveal always ends in the actor really over acting. I appreciate they had to leave plenty of unanswered questions for a second season but logically there had to be a second psycho due to the revealed one being unable to have possibly been everywhere they were meant to be. Part of me feels like this should have all been wrapped up rather than left to expand on, it's not like Emma has many friends left after all! In addition to the main plot there are a few sub plots that help to provide red herrings, these weird storylines gave a slight Twin Peaks vibe to events at times.

Scream is a much better made show than I expected and it got me pretty damn hooked, even despite the final few episodes slipping in quality (such as the introduction of a plot device of far too many characters vanishing with no good reason for long periods of time), and a few characters who I just didn't like at all. I would be hard pressed not to recommend you check this out. Much better than the films, anything after the first one anyway.