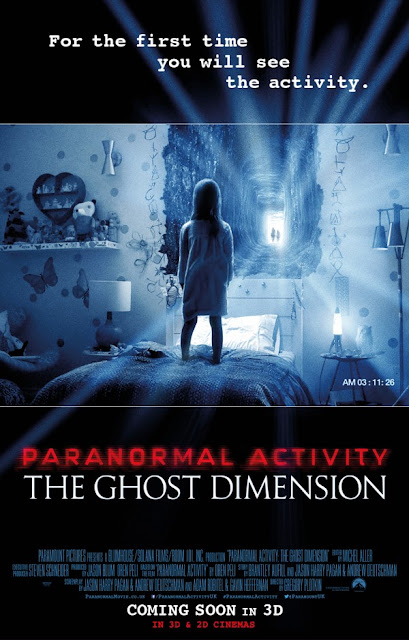 Wow, they just keep churning these out, I felt for sure Paranormal Activity: The Ghost Dimension was about the ninth or tenth one in this often tedious series but it is only the sixth. To make things try and feel fresh this time around for once you can actually see the ghost haunting people via the use of a magical camera.

It is December 2013 and Ryan, his wife Emily and their daughter Leila have recently moved into a new house, it is not long before Ryan discovers a strange video camera and a box full of old home movies. The camera is strange in that it seems to be able to pick up things that are not visible with the naked eye. His brother Mike is staying at the house after a messy break up and one night while stoned the two decide to watch some of the home videos; what they see is quite odd. The videos from the late 1980's feature two girls; Katie and Kristi (from Paranormal Activity 3) who are being hypnotised by a creepy cult guy and who seem to be able to see into present day. The strange camera starts to pick up more and more hidden activity in the house and soon the family come to the shocking conclusion that some sort of ghost has a special interest in their young daughter. 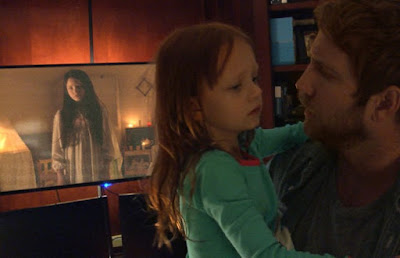 I am so sick of this series, it really just needs to end already. Here we have yet another new family, again filming things for no good reason, inevitably they are all probably going to be killed off by the films end, inevitably supernatural events are going to ramp up over a series of nights, and inevitably that arrogant group of Witches are going to show up babbling about the demon called Toby. You could say that was spoilers but face it; that has been the plot for pretty much all the films.

The new thing this time around is of course the spirit camera which can see demonic forces. Initially this force is represented by floating smoke particles, but as the nights go on this starts to take more of a physical form. It all culminates in some not bad CGI and some really terrible looking CGI (a character has a demonic hand burst through their body and it does not look great at all). I get they were trying to think of a new way to get horror but it actually takes away some of the possible frights as when you know where the demon is it is not as scary as when it could be anywhere. I watched this in 3D and to be fair it was well handled with the film being 2D apart from the supernatural occurrences that would leap out the screen. I also liked that the spirit camera has scan lines on it making the found footage feel vaguely more real. 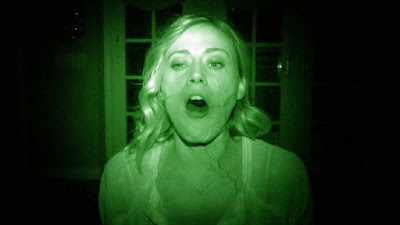 That is the only new thing though, most of the scares (and The Ghost Dimension is scary at times) are things seen hundreds of times before. Objects suddenly smash, people are dragged about by an unseen force, eyeballs go black, night vision mode is used, and there are a suffocating amount of jump scares. This maybe has the most jump scares of the entire series, they always shocked me, but they also just as much irritated the heck out of me as it is such a lazy way to generate fear. The best part of the film comes in the final fifth where things take a turn for the very crazy with all sorts of madness happening, but again this is not new, the one thing that made Paranormal Activity: The Marked Ones stand out was the insanity of the final part, so using that same plot device in the very next film again just felt plain lazy.

There is a point in The Ghost Dimension where it finally looks like the dull storyline will be resolved, I hoped and prayed it would end as it's got to the point where not having a stupid twist to finish on would be a far more shocking twist than whatever the writers could come up with. At times I admit the story does get clever, the reveal of just how the family came to be living in the house, and the houses back story was neatly done, and the inferred time travel sub plot was pretty interesting. The script is quite witty at times also, Mike in particular has a load of great lines that got the packed cinema laughing, maybe the best being during the big finale when (to paraphrase), he says "Next time I need somewhere to stay I'm going to go stay at Mom's!". 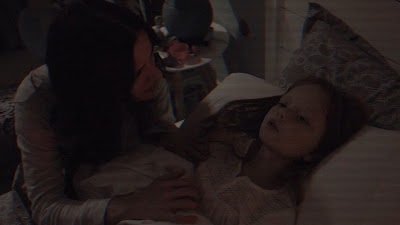 This isn't a bad film, that's the frustrating part, it has a lot of good things going for it and it does eventually manage to chill away from the jump scares, it's just this is the exact same found footage film as the five before and so I could not stop myself yawning at times. The series needs to end, if the inevitable seventh film in the series doesn't wrap things up then the world truly is a messed up place. EDIT: Ok so it turns out this was the final film in the series! So after six films the convoluted plot doesn't really even get wrapped up, fantastic.