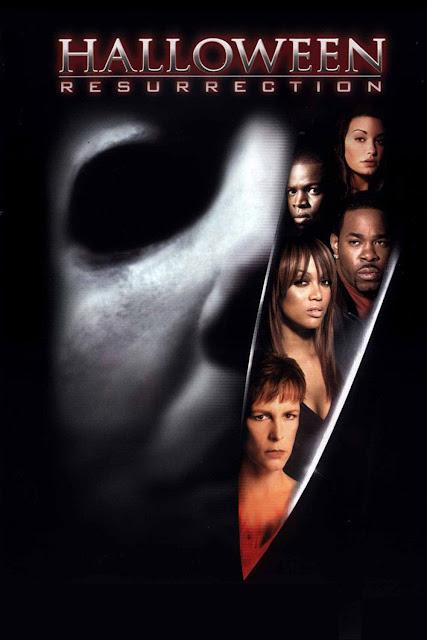 For this finale entry in the original series I was expecting something along the lines of the insipid Halloween H20: Twenty Years Later yet I was both surprised and delighted to find a film that has well stood the test of time, both innovating as well as being a decent Myers film.

The unrelated prologue set in 2001 has killer Michael Myers (Brad Loree) heading to the insane asylum where Laurie Strode (Jaime Lee Curtis) has been kept for the last three years after murdering a man she had mistaken for the masked psychotic. With that storyline over the film begins proper in 2002. An internet web show run by Freddie (Busta Rhymes) and his DangerTainment company has planned something special for Halloween. Six competition winners are going to get to spend a night in the childhood home of Myers, their every move broadcast to the web, however predictably the killer turns up and soon starts slaughtering the group. With no one to help (due to the authorities and viewers all thinking the murders are fake) Sara (Bianca Kajlich) and her fellow survivors must find a way to escape the house of hell.

I actually really enjoyed Halloween: Resurrection, it actually tries to do something a little different. The majority of the film takes place in the Myers household and has each of the six contestants all wearing head mounted cameras. While shot traditionally the head cameras the cast wear are all fully functional and so a mix of found footage style shots and slasher direction is melded to create an interesting looking movie. That means you get plenty of P.O.V shots of the cast getting killed as well as a few from the perspective of Michael himself. Mixed in with this are surveillance type cameras that create the impression of this actually being real. Another fun touch is that there is a sub plot involving a party where the party goers are all sat around watching the internet show and slowly realising what is happening is real. This got pretty fourth wall breaking at times with them all shouting at the survivors like someone watching a horror film would do.

In H20 Myers acted like a toddler taking his first steps but thankfully he is back to being his intimidating best, he looks scary and dangerous and the breathing effects for his mask are spot on. He is also back to being pretty darn powerful with a serious of fun kills that show an inventiveness missing from the last film as well as keeping the blood and gore to a minimum. Someone gets decapitated (their head mounted camera showing the heads descent down a flight of stairs), people get impaled on various objects, someone even gets their head crushed by Myers powerful hands, a call back to a similar kill in Halloween 4: The Return of Michael Myers (though as before that film as well as Halloween 5: The Revenge of Michael Myers and Halloween: The Curse of Michael Myers are non canon here). The effects are mostly pretty cool, the severed head looks quite fake though.

There are a few performances which really affected by overall enjoyment of Resurrection. The worst by far is Busta Rhymes who pretty much destroys any scene he is in, his script is abysmal, and being a comedy character he is pretty much indestructible. There is an admittedly humorous scene early on where he is dressed as Myers and encounters the real Myers. Not realising he is talking to the actual killer he admonishes him and sends him away confused. That is about the only bearable part though as later on Rhymes manages to beat up Michael with Kung-Fu; about as ridiculous as it sounds! Kajlich seems miscast as the heroine, her character is quite dull and her transformation into bad-ass feels forced and unnatural, during a scene with her armed with a chainsaw she manages to sound so half hearted with no passion in her lines. Finally there is a younger looking Katee Sackhoff (Starbuck from Battlestar Galactica) who does her best with a terrible character. In general all the young contestants are uninspired stereotypes who I felt nothing for.

With the Laurie Strode story over with the plot here is even less substantial, boiling down to an anti-home invasion film with you kind of feeling that Myers is justified for trying to get the intruders out of his home. The fact that he was known to be at large makes DangerTainment getting permission to use his house quite weird. The set up for the final sequence is cleverly done with random elements all combining to make the 'death' scene satisfying even if the effects are not the best. As always the very end is pretty fantastic, it is very generic but done so well that I still approved. Rick Rosenthal (who also directed Halloween II) does a grand job of directing and I love that originally it was planned for the DVD release to include all six 'contestants' head camera footage available as their own found footage films, even if that didn't end up happening. 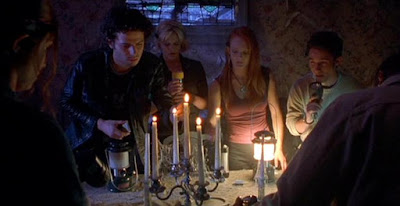 After a series of increasingly bad films it was a nice change to get a solid teen slasher, it is just a shame that the characters were all awful, and that Rhymes was given such a large role when he should have had a bit part at best. Still, there is giddy fun to be had here for sure and so it is hard to be too put out by that.