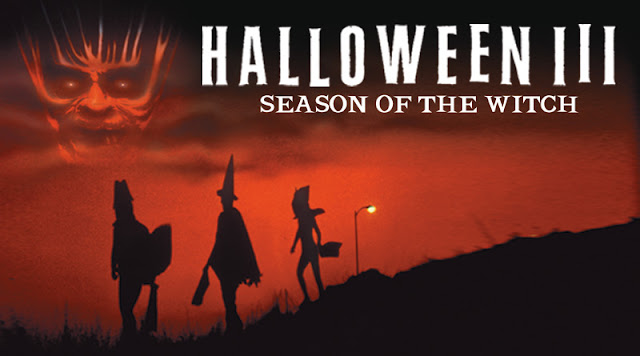 After a long month of reviews here is the final horror film to be reviewed for my Halloween celebrations. Halloween III: Season of the Witch was a huge disappointment when I first watched it as I had fully been expecting a Michael Myers horror, I had even put off watching the rest in that iconic series while I waited for this to be posted to me. As everyone knows this is the one film in the series to have nothing whatsoever to do with that particular killer, originally each of the Halloween films was due to be a stand alone piece, just using the theme of that great holiday as inspiration but after a poor reception for Season of the Witch that plan was dropped.

Halloween III opens on 23rd October 1982 with a terrified man on the run from cold suit wearing figures. Eventually he comes across a gas attendant who takes the poor man to hospital. This is where Daniel Challis (Tom Atkins) meets the man who desperately tells him "They're going to kill us. All of us! All of us!" before fainting. Challis takes him for a crazy person but soon the man is found murdered, his attacker committing fiery suicide, and when the man's daughter Ellie shows up looking for answers Challis feels compelled to team up with her to trace her Dad's final movements. This leads them to the sleepy town of Santa Mira; the home of the Silver Shamrock Halloween mask company... 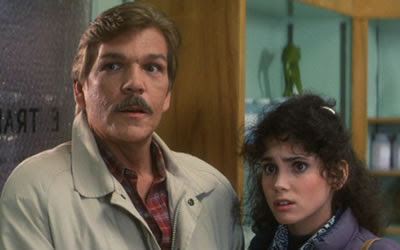 If you get over the fact that this isn't a Michael Myers horror there are actually some pretty great ideas used in Season of the Witch. Over ninety minutes a real sense of urgency, conspiracy and paranoia is built up, there is a real Invasion of the Body Snatchers vibe with the main characters of Challis and Ellie always under surveillance, their every move watched by the Silver Shamrock company and it's far too friendly owner Conal Cochran (Dan O'Herlihy). The actual pacing of this film is quite fantastic, the initial opener still stands out as suspenseful and mysterious, it pulls the viewer as well as Challis into the plot, though for womaniser Challis it did feel maybe he was in it just for the attractive daughter Ellie rather than a sense of doing things for the right reason. The middle part of the film is the duo's investigation, the whole town of Santa Mira is an unnatural place; curfews every night, surveillance cameras absolutely everywhere, and telephone lines to the outside world blocked whenever it is deemed necessary. The final sequence goes a bit weird but is enjoyable and leads up to a great cliff hanger ending that still has power today.

Throughout the film adverts play on TV advertising three Silver Shamrock Halloween masks and featuring a count down to the holiday, these adverts feature the tune 'London Bridge is Falling Down' with "X more days to Halloween" repeatedly sung over it. Colossally annoying and irritating these adverts are, but that is the point as Challis shares are hatred of the things. It's all about making it seem like these three scary masks are the next big thing all kids in America are after, but with just three masks it did seem a bit unbelievable, especially a montage of Halloween nights from around America showing the majority of trick or treaters all wearing these identical masks. I guess it was budget constraints stopping more of them being used. 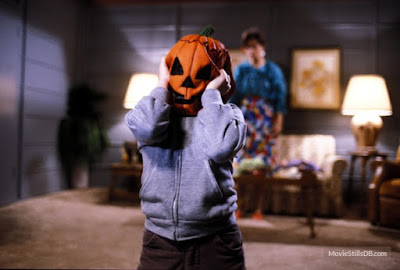 The films plot is interesting enough and keeps the viewer hooked to find out just what is up with the obviously nefarious masks and what exactly is going to happen when the count down to Halloween ends. The pay off is quite fun but with a bizarre use of magic to explain everything it does feel a bit silly involving as it does Celtic legends and Stonehenge. This isn't helped by the sub plot that infers all of Cochran's employees are actually very realistic looking robots! Either of these plots on their own would have been enough, both takes things a bit too crazy. O'Herlihy is great as Cochran but when it comes time for the big reveal even his character is a bit cagey on just what his reasons are for doing what he has done.

Special effects are quite entertaining, there is a nice sequence when someones head gets pulled off their shoulders, culminating in a bloody spurt as the torso falls to the ground, later a fight against a severed robotic arm was well done, though some of the more digital effects added in post production (such as during the finale) look pretty bad. There are also a few scenes involving insects and snakes where they obviously crawl over actors bodies, kinda gross, never like real insects and creatures used for horror. 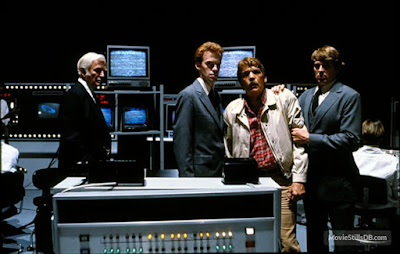 As a stand alone Halloween film this is not bad, the plot is suspenseful enough and the directing by Tommy Lee Wallace is classic pulling on many tenants of the horror genre. There are far worse films to watch on this spooky day and that's for damn sure, it is a shame so many people get put off this due to expecting a Michael Myers sequel (though clips from Halloween are shown on a TV at several points).

I have changed the director name as someone informed me it was wrong, must have been tired. Thanks to that person but I wasn't going to approve the comment due to threatening and swearing behaviour!