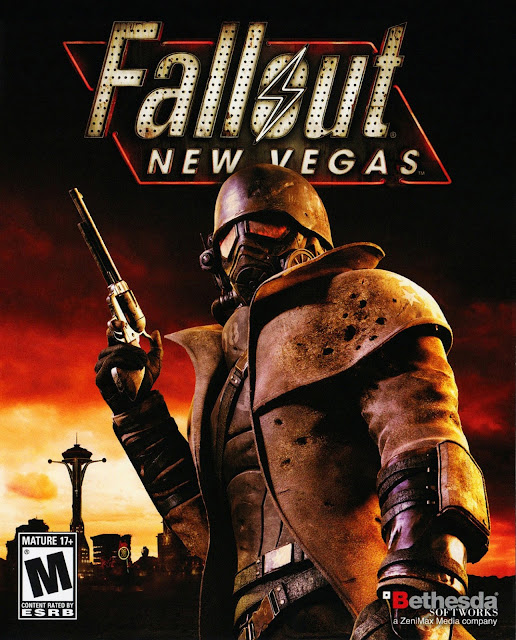 I brought this game when it came out back in 2010, so yes, it did take me five years to finish. In that time I had two playthroughs, my first took me all the way to the end of the game but my interest faded as I waited for the DLC to be released. My next play through started a year or so back, I have finally finished it today. Now I kind of had to panic play as I learnt Fallout 4 is due out next month and I didn't want this to still be hanging around. As such for my final push I put the difficulty down to very easy, this was not due to the game being too hard, more that I needed to quickly mop up what was left, namely the four DLC packs.

It is 2281 and four years after the events of Fallout 3 though you play as an unrelated character in an unrelated place. two hundred and four years since nuclear Armageddon destroyed civilisation. You play as a courier who had been charged with delivering a package to New Vegas, the game starts with you a prisoner of Benny; a small time gangster. He executes you and buries you in a shallow grave. However you somehow survive this ambush and wanting revenge, as well as answers of just what it was you were delivering you head off into the Mojave wasteland. This is a world where two giant armies; that of the NCR (The New California Republic) and Caesar's Legions (modelling themselves on Ancient Romans) are gearing up for war, your actions will have a direct outcome on who wins. 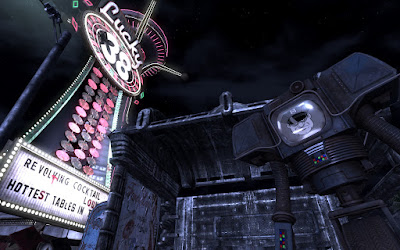 Despite being the next in the series of Fallout games this somehow has a lot more bugs and glitches in it than the third game did. Unfortunately from the very start to the very end I was encountering these and so it could not help but sour my enjoyment somewhat. The game often crashed, quests were uncompletable due to elements out of my control and the frame rate drops dramatically at key points. All kind of annoying, I hope the new game manages to avoid this.

The best thing in my opinion about the Fallout series is the huge world you get to explore. Upon starting you can literally go anywhere you wish to, most places provide new quest lines, bizarre characters and lots of back story to the world. There is never a lack of anything to do and the amount of quests you get can be quite dizzying. I finished at around 55 hours and I had plenty of quests I just never got around to doing. Fallout 3 let you revisit the game world after the credits, not so here, and so it led to some stress the first time through due to fear of missing out. This stress actually led to me abandoning that play through. 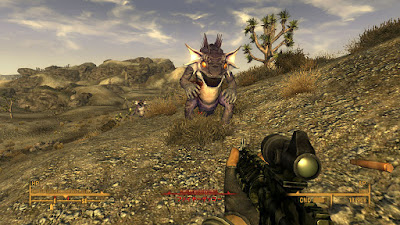 Despite all the issues this is a damn fun game. The Mojave wasteland feels like a living place, there are townships dotted around, tribes and gangs all waiting to be encountered. This is an RPG first and foremost, though plenty of combat is also abound. Experience points can be used to increase everything from your expertise with guns to your knowledge of science, explosives, speech skills and far more. There is a hell of a lot of talking in New Vegas, at points there was almost too much, I would get bored and skip conversations. It is all well written and there must be hundreds of unique characters. Combat is satisfying, the V.A.T.S system letting you tactically pause time and choose not only targets, but specific body parts of targets. A lot of the enemies are human though there are plenty of super mutants, robots and mutated animals of the wastelands to fight.

Playing this over such a long period of time I can't really recall the main plot too much. The overall story is very simple and can be finished relatively quickly, the side missions are by far much more interesting, the ones which involve you travelling to messed up vaults the best ones. One has you trying to fix a robotic dog for an Elvis impersonator, another has you trying to make your way to an airbase where mortars try and take you out, there is so much to see and do in this world. 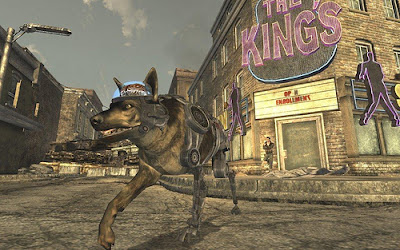 Long ago I reviewed Dead Money; the first of the DLC packs. That is probably the best of the four. Honest Hearts has you travelling to a national park, there is not much there, it only took around an hour of my time. Third DLC pack Old World Blues has you travelling to a scientific research centre in a huge crater where a group of insane robots live, that was marred by too much talking and too many super strong robot scorpions! The last DLC pack Lonesome Road has an interesting story that looks at the shady past of the courier you play as, it is almost horror like in your linear journey through a land ruined by earthquakes and disaster.

For New Vegas factions were introduced, most of what you do either upsets or please factions, make one too unhappy and they will send out assassins to kill you randomly, also you cannot do quests for a faction if they dislike you. This was frustrating for me as at one point I really did want to do all the quests and so being locked out of specific ones annoyed me. There are plenty of load times here, this is not helped by much larger locations than Fallout 3, the lack of a run button is keenly felt as you slowly amble around huge warehouses and casinos. I feel Fallout 4 may finally be running on a machine that can handle the sheer scope of these type of games. 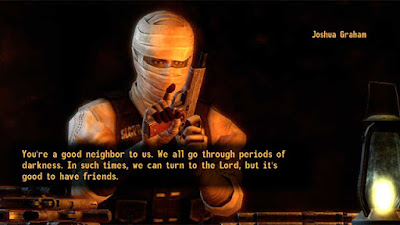 While I appreciate this has been a scatter shot style review, not really going into too much of what makes New Vegas just so compelling. Basically this is a good Fallout game but it is not as good as Fallout 3 which is bizarre seeing as it came out two years after it. There is lots of fun to be had here if you can look past the many bugs.