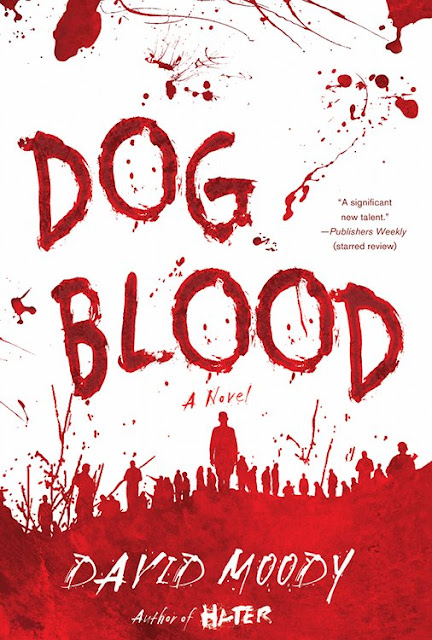 It was just over a year ago that I read Hater; the first book in the Hater series and now I have finally gotten around to reading the second book Dog Blood. These are horror stories that seem almost like an off shoot of the zombie genre. There are the normal people; the unchanged and then there are the Haters who have an overwhelming desire to kill anyone who are not like them but who retain their basic humanity in all other aspects of their lives. There are going to be spoilers about Hater here as a warning.

Dog Blood takes place around three months after the events of the first book and explores the deepening war between the unchanged and the Haters. The majority of unchanged are now grouped together in shanty towns at city centres, protected by the military, one such unchanged is Mark whose home in a hotel room holds a deadly secret. Danny McCoyne meanwhile has adapted to his new life well but his desire to find his hater daughter Ellis has made him more inclined to self preservation and less interested in fighting, and so he has more self control than most. While searching for her he becomes embroiled in a plot to bring the war to a new devastating level.


Like so many of David Moodys books I initially started off enjoying what I was reading but not completely engrossed, but over the space of one lunch time I became hopelessly addicted, from then on every lunch time I would spend glued to the pages of Dog Blood, reluctantly tearing myself away when I had to return to work. Starting the book off with a brand new character felt strange at first, I felt it was a bit late in the series to bring in a new person but it is actually really clever how Mark's story pans out. Not only does seeing events from his perspective give a far more detailed look at the unchanged side then would be possible with Danny but the way Moody drip feeds information that eventually makes the two sides meet up was very well done and was a pivotal moment for my enjoyment of the book.

The issue I had with Danny in Hater was that he was obviously a bad guy, it is hard to root for a remorseless murderer and at first I felt exactly the same way. Regardless of the horrors the unchanged military have committed the way him and others ruthlessly kill any unchanged was still not something I liked. However by making his plot arc far more about him trying to reunite with his lost daughter than of him killing innocents the gap was bridged and I found myself able to like him and root for him, identifiable. By the books end when he is killing people left right and centre Moody manages to make you not really mind as a reader. The unchanged are rarely given any personality or description, they are the pathetic faceless masses described as a huge swath of people rather than individuals.

The degrees of escalation that Dog Blood morphs through is well handled. The first third feels traditional, both Mark and Danny getting chapters to themselves as they exist in this new world. The middle part deals with Danny's personal transformation, the new found sense of purpose and a reason to fight. Meanwhile the final third is all out madness, it is here where a lot of the action takes place, all culminating with an appropriate apocalyptic event. Like any good middle book of a trilogy this neither begins or ends a story, it all finishes with the plot in mid arc and with unresolved issues. With the Autumn series Moody sometimes introduced too many different characters who would kind of meld into one at times, Dog Blood is far more personal with just a handful of characters who get fleshed out, Danny in particular being the main focus.

I still don't quite get the Hater vs. unchanged fight for survival going on, but by focusing on one characters view point that doesn't really matter. Dog Blood builds on the thrilling finale of Hater and runs with it, excitement and action for most of the way, though inevitably loosing the paranoia that so expertly enclosed the first book. Another very well written Moody book, I look forward to reading the next book in the series Them or Us.