What We Do in the Shadows (2014) - Horror Comedy Film Review 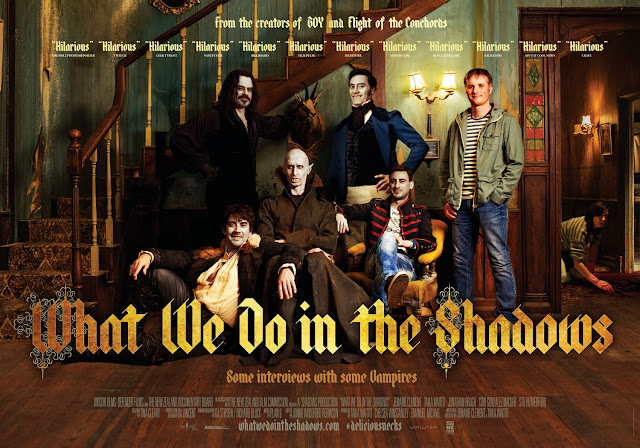 I had heard this comedy horror from one half of Flight of the Conchords was a damn funny film but still I was unsure if it would appeal to me. It seemed just too many people had waxed lyrical about it but as it turns out this is pretty much hilarious, the funniest horror I have seen since the fantastic This is the End from 2013.

Set in Wellington, New Zealand What We Do in the Shadows is set up in the style of a mocumentary with three vampire house mates; Viago, Deacon, and Vladislav (Jemaine Clement) hiring a film crew to document their lives in the run up to an annual masquerade ball. Along the way newly turned vampire Nick brings conflict as well as providing the old fashioned vampires with introductions to modern technology, while the group have to deal with vampire hunters, their rivals; a pack of werewolves, and Vladislav's ancient nemesis... 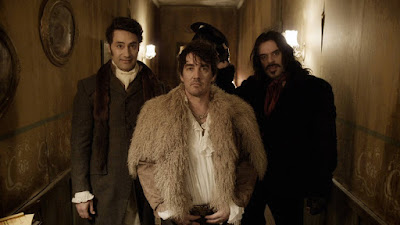 For the first ten to fifteen minutes I was initially concerned that this wouldn't actually be that good, yet at some indiscernible point I found myself laughing away, something which did not stop from me for the remainder of the film. The comedy is top notch and like This is the End a lot of the lines are improvised leading to some random but hilarious observations and quotes. The main comedy aspect comes from just how maladjusted the trio are and how the tropes of being vampires affect them, such as not being able to get into the local night club as they can't convince the bouncer to invite them in, or having no reflections in mirrors so needing their friends to draw pictures of what they look like when they get dressed up.

Each of the main vampires is based on a particular type. 8000 year old Petyr who lives in the basement is a spin on Nosferatu, only able to hiss. three hundred and something Viago is a dandy and slightly Dracula-esque , Deacon is rebellious, and Vladislav is based on Vlad the impaler. Meanwhile Nick reflects the more modern style of vampire (at one point saying "you know Twilight? Yeah I'm that main character") but is prone to showing off about his new state. The film also features several other monster types with zombies, witches and werewolves. the werewolves in particular are scene stealing every time they appear, every line they spout is liquid gold (the alpha male reprimands his friend for swearing by saying "we're werewolves, not swearwolves" for example) 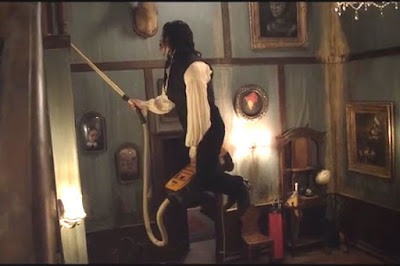 While the vampires are killers, and in fact kill lots of people throughout the film they actually manage to come across as not only sympathetic but also slightly pathetic and so are a likable bunch. Viago visits the retirement home where his true love now resides (unbeknown to her) having missed his opportunity to get with her when she was younger due to his coffin getting misrouted on its trip to New Zealand, Vladislav struggles with his vampiric skills due to having lost confidence in himself due to his sworn enemy 'The Beast', while Deacon is is convinced of his coolness when he isn't really, and seeing the trio happily watching videos of the sun rising on YouTube makes for a nice moment. What We Do in the Shadows is very bloody at times, usually blood is used as a comedy device, there is not really much horror at all, a tense battle later on was exciting and made me actually worried for the fate of some of the characters but for the most part the theme here is of a relative normality than of peril. To avoid getting corny these people also bring a fair amount of heart, when they speak of seeing friends get old and die, or even when Nick realises he can never eat a chip again (food makes them vomit up blood) it dawns on you what a double edged sword being a powerful immortal actually is for them.

The decision to make the film a mocumentary was a great idea, initially this is used just as a cheap way to introduce the characters with talking head segments over laid with traditional drawings of vampires from history but later on it helps explore more the relationship between the main characters rather than any sort of over arching plot. This does feel like a documentary and that is reflected in that there isn't really a story, it led me to wondering how it was actually ever going to end, the film seems longer than it is due to this meandering view, this wasn't a problem at all though. The hand cameras are quite steady for the main part, there are parts of hurried shaky cam but mostly this just isn't an issue. It was also a nice touch to get the camera crew involved every now and again as it was easy to forget they were there. 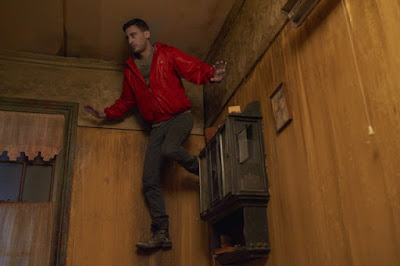 Throughout there is a soundtrack comprised mainly of what sounds like German folk music, all old instruments and brass giving a chaotic and random feel that really fits the tone well. The special effects are all pretty decent, the characters look the part with great clothes design and parts where characters float or turn into bats all looks solid and impressive.

There just is so much to like with What We Do in the Shadows; the police visit, argument with the werewolves, the nightclub, bat fight all are hilarious scenes with a combination of inspired dialogue and visual comedy that makes so much of this movie properly laugh out loud. Little scenes such as Viago brushing Petyr's teeth, or the group browsing the web for pictures of virgins add so much humour. Some minor issues do appear, the zombies seem under developed, while the revelation of just who Vladislav's nemesis 'The Beast' actually is was a bit of a let down while the film does have an initial damp impression.

This movie excels best at creating realistic feeling characters out of fantasy tropes, it really shouldn't work but it does, essential viewing for any fan of comedy or horror, I have a feeling this will only get better with repeated viewings.