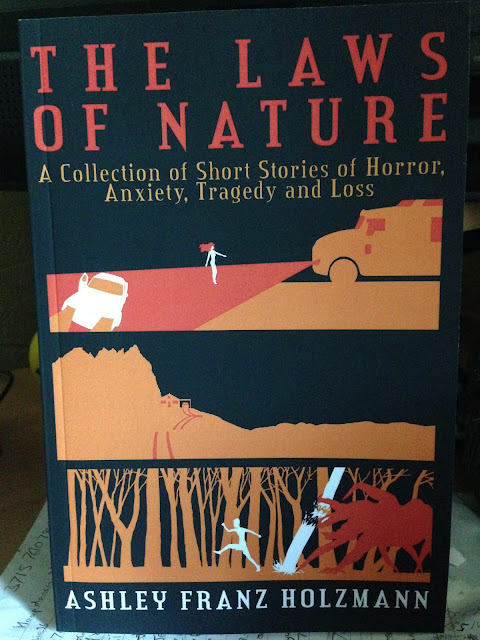 I have always loved a good short horror story, I often find that they are far more effective in creating a feeling of dread than any full size story. Upon getting Ashley Franz Holzmann's The Laws of Nature I was hoping against hope for some quality stories. I will try my very best to spoil these as little as possible., and as an aside I really am not that great at book reviews!

I wouldn't normally mention it but kudos goes to the book design itself which looks very stylish with its black cover featuring minimalist scenes from three of the stories contained within. I also love the blurb below the title 'A Collection of Short Stories of Horror, Anxiety, Tragedy and Loss' which manages to conjure up a weird feeling of restrained terror. A solid cover is good and all but of course it is the stories contained within that matter. Within more design choices have to be mentioned before getting on to them. Opening with an introduction from the Editor and ending with a letter from the author this feels more personal than most short collections. Added to this is the fact that many of the stories end with an after word by Holzmann, usually providing his inspiration for the tales, these are all real interesting, it was cool to see the workings out that led to the stories.

The Laws of Nature features nineteen short stories and while they vary in style and levels of horror thankfully they are all well written with none that I thought were badly written or dull. Every single one is written in first person and they are all really quite short making them very addictive to read, many times I would sit down intending to read just one and finding myself unable to stop from starting the next. The longest one clocks in at seventeen pages, while the shortest is just over a page long.

You can roughly split up the tales into three separate styles. First off you have the horrors that are so embedded in the real world that they come across as less than horror and more like recollections of true events. A trucker talking about one fateful night in Checkpoint Charlie, a teenage girl talking about her first ever suicide note she wrote in the sad Plastic Glasses, and the terror of being attacked by a random stranger in See Me. Let Go. These are all done so matter of factly and in the case of the trucker one has actually led to me gaining a new respect for lorry drivers.

The next style of stories are ones that are based on realistic horror but the type of stuff people wouldn't normally experience, a few deal with serial killers such as Lady Macbeth in which a reporter writes about an encounter with a deranged murderer while researching a new book, Others deal with real situations but add a little supernatural flavour to spice things up such as Maslow's Hierarchy of Needs and Crying Numbers. A fair few of the stories deal with pregnancy and infants which seemed to be a recurring theme.

The last set are of course the ones far more rooted in traditional horror, opener Stump about a man being chased through some woods by a monster, a ghost in In My Father's House and other unnatural terrors in Glass Houses and Good Time Charlie. In this bracket I would also stick the disgusting White Heads (about insects) and Orpheus's Lot (reminded me a lot of Chuck Palahniuk's Haunted) that unfortunately for me I happened to be reading whilst eating my lunch and not long after recovering from a 48 hours sickness bug, didn't help they follow on from each other! I enjoyed those tales also but I am glad there were only two really disgusting ones contained here as they both made me feel queasy.

While a lot of his stories are entertaining there are not really many moments where I felt too creeped out, this doesn't take away much though as the only constant fear I have ever read while reading horror was any of H.P Lovecraft's tales and everyone knows he must have sold his soul to the old ones to have such a way with creeping dread. Also a few of the stories end unsatisfactorily for me, or otherwise have odd parts I did not really appreciate. The strange conversation in Stump, the resolution of Good Time Charlie (which in itself was similar to Glass Houses but inferior), and the whole second half of Crying Numbers which didn't really feel like it went anywhere interesting after the halfway shock twist

A lot of the time Holzmann ends on a horrifying twist that usually was quite powerful, a few times these did fall slightly flat for me but when they strike correctly they sent shivers down my spine, especially in the case of Hush and Putting Down Your Love, the former I just did not expect and so blew my mind a bit, he was able to bring tears of shock to my eyes in just nine innocent words, the latter I guessed immediately what was going to happen but it didn't lesson the impact. The collection ends on Cold Static; a riff on Quantum Leap and was an ideal way to finish even suggesting a link to all that came before.

Overall I was impressed with this collection, the tales within lived up to the great sleeve design and there was not a single bad story. At 150 pages this doesn't outstay it's welcome and I actually loved how short a lot of these were, so well worth a read. The Laws of Nature is available to buy in both paper and digital form.