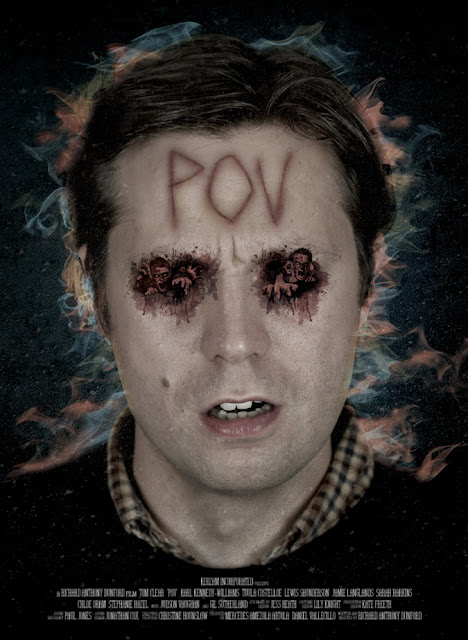 P.O.V (written and directed by Richard Anthony Dunford) is an indie horror film with a difference in that the entire film is seen through the eyes of just one character, as well as this it also plays out in real time. Indie films can be hit and miss and with a budget of just £9,000 I did not know which side this would fall onto. However a film shot entirely from a single characters perspective is something that would never be attempted in a big budget movie and so is quite unique, plus I though the trailer looked pretty decent.

Zack (Tom Clear) has recently split up with his long term girlfriend and so in a bid to cheer him up his brother Sam, and two best friends Mackenzie (Lewis Saunderson) and Vickers take him to a party at a disused retirement home that is under going renovation. Initially things are going great but not long into the evening Zack friends start turning into demonic creatures who then begin to hunt him down. Is this the result of a curse put on the property by disgruntled immigrant workers, or is the mystery drug he took causing horrific hallucinations? 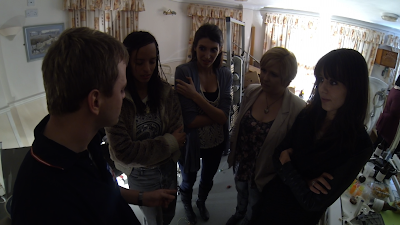 P.O.V impressed me, sure it is rough around the edges and features some dodgy acting but the core concept of seeing things all through the eyes of one person works wonderfully. For the first forty minutes there is no horror at all to speak of, instead you get a view into Zacks world and the people who surround him. From the initial drive to the party to the ice breaking conversations what should be tedious is made engaging by your participation. Characters look at you and speak to you, while Zacks few mumbled words here and there help to give the impression that they are talking directly to the viewer. Zack drinks, he smokes, he even makes out with a girl at one point all while maintaining the illusion of seeing what he sees. These first half of the film impresses most in that while I strained to see where there was a scene break I just could not see it. From when he gets to the party there must be a good fifteen to twenty minutes when it seems all just one take. Whether this is true or not I do not know but the fact I can't tell makes it pretty successful.

It initially has the feel of a stage play, characters fall into two main categories. The first type are ones who seem larger than life, they exaggerate their mannerisms and the way they speak as if they are performing to a crowd. The best at doing this is Saunderson as Mackenzie who stole all of his scenes, his recitation of a ghost story about the retirement home they are in goes on forever and all in one take, really fascinating stuff. The key cast are all good at this type of acting. The secondary roles are not so good though and feature some really terrible actors who come across as very wooden. Being an indie film I would not be surprised if these dodgy ones were friends or family rather than professionals. I could look past this but on occasion it got in the way of my immersion. 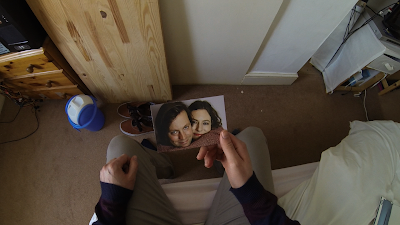 When the actual horror starts it becomes a lot more obvious when the camera changes, but there are some nifty tricks used to cover this. The demons that Zack sees vary in quality, the main ones having kind of a burnt look to them. They looked messed up but usually don't actually do much other than chase or taunt, the make up also isn't stellar but it does it's job. I love the many times you see a demon then the view looks away and when it goes back the demon is gone, so effective though it did run the risk of being over used. With only the one characters view point P.O.V ran the risk of becoming dull, especially when all Zack seems to do is run around the same corridors and rooms over and over again. The actual location is surprisingly small but subtle changes are done to the places so that there always seems to be something different on each subsequent pass. Later on camera tricks are used to have teleporting characters, and even a computer generated creature running across a ceiling at one point. When the finale comes though it goes off on a bizarre dream like tangent that seemed unnecessary and appeared to be there just as a way to remain real time. I would have preferred if the weird dream sequence had been dropped in favour of a jump cut to the ending as it didn't seem to add anything other than some of the worst acting of the film. The actual ending is satisfying, I just wish the run up to it had been better.

For people expecting pure horror they may well be disappointed, with the possibility of it all being a bad drug trip it can be seen more as a condemnation of illicit drug use (or indeed the lack of quality control that non regulated drugs receive), using horror as a means to show this is not a bad idea. There is heavy foreshadowing of events to happen from what people say to the items that get shown on camera, I myself enjoyed this and never felt too heavy handed. At times the first person perspective made me feel slightly ill, but only was an issue during a short fight sequence. When the horror does start it remains constant, though sometimes ineffective such as a bizarre dance floor scene where eyeless demons mumble distorted insults at Zack. 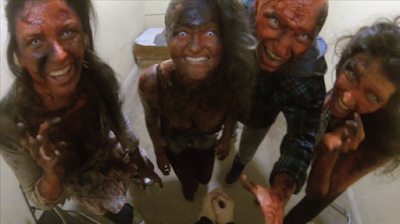 So P.O.V is a bit unpolished but with such a low budget that just can't be helped, regardless of that this is a decent horror which successfully tries something that hasn't been done much. When the credits come up and the great end theme started I felt like I had witnessed something truly special,  There is some terrible acting on display at times and some later pacing issues but overall this was an enjoyable film. P.O.V is out now on VOD in the UK here and US here if you fancy it.