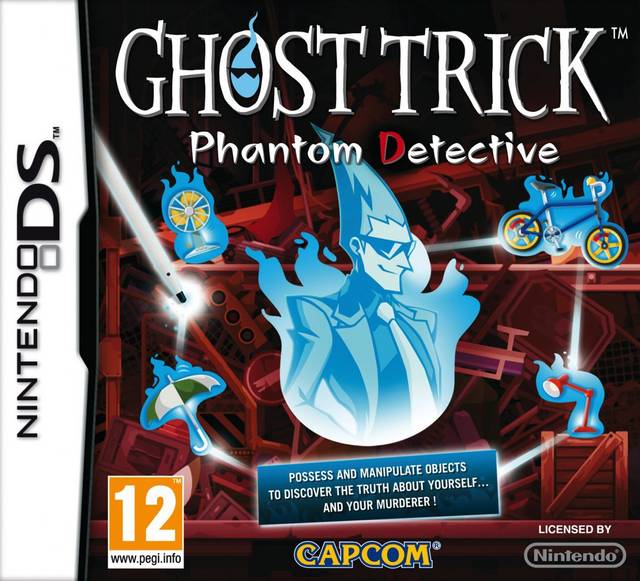 I was in two minds on whether this should warrant a review on my blog for while there are ghosts in this game there is no horror to speak of, still here I am writing away regardless.

In Ghost Trick: Phantom Detective you play as Sissel, or rather the ghost of Sissel as when the game starts you have just been murdered. As a spirit you have access to special abilities, namely that you are able to possess and manipulate objects, can travel via phone lines, and that you can head back in time four minutes before a persons death. A fellow spirit tells you that if you want to solve the mystery of who you are and how you came to die then you must do so before dawn as that is when you will cease to exist. 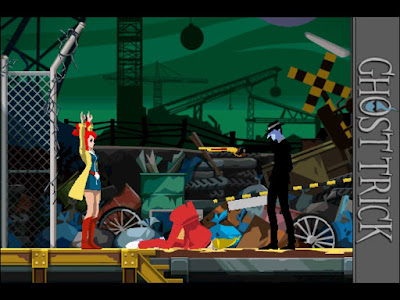 This is very similar in style and tone to the Phoenix Wright: Ace Attorney series as while it deals with serious subjects such as kidnapping, murder, and suicide it does so in a light hearted manner with all the characters you meet being larger than life and full of silly lines. This comparison isn't that surprising considering the creator of that series Shu Takumi is also behind this. Ghost Detective is split into 18 chapters all taking place over one night. The goals for each one are clear and usually have you tasked either with going back in time to prevent someone's death (such as rigging an electric chair to malfunction or defeating a murderer) or by using the environment to reach a relevant location; helping an inmate escape from prison for instance.

You move around the levels by dragging the DS stylus from object to object and some you can move, such as rolling a tyre along the ground or flipping switches. This seemed like it would be too easy at first but there are actually a few moments where I really had to stop and scratch my head. Later on you get control of a second spirit also, with a different set of powers and controlling both in tandem ups the complexity somewhat. This puzzle like structure is added to when you get time limits. When you travel back in time to prevent a death the victims last moments play out and so you have to be quick to get the solution. Doing this can make you feel quite clever such as a really convoluted part in which you have to get a man having a heart attack his pills (which involves suits of armour, curtains and a globe to name just a few bits of the  answer). While some parts are tricky plenty of hints get dropped and the scenes can be replayed until you get it right. 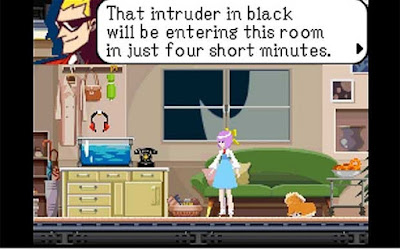 At first I thought there would not be much dialogue but for every person you save they are then able to talk to you, from Lynne the rookie detective to a man on death row and even an excitable dog named Missile there are a whole host of likable characters. The plot was really well done, the initial goal of finding out just what happened to you is soon superseded by mystery upon mystery as you discover you are all somehow linked to some mysterious events from 10 years previously. Time travel always makes for some interesting developments and I'm pleased that by the conclusion the paradoxical effects it entails make for some clever twists and revelations.

Sure this could have been more serious, deaths more violent and gloomy, but the stylish cartoon look and great script make for a fun and very addictive game, besides that more moody game exists in the form of creepy Playstation 2 game Shadow of Memories, the animation on the characters is stunning, though the music was not that memorable but that's only a minor thing. All in all if your after a solid time travel detective story and like Phoenix Wright then this is well worth a play.