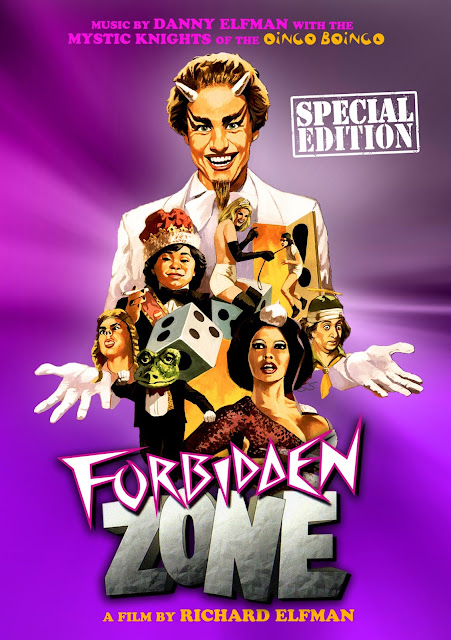 What a weird film Richard Elfman's Forbidden Zone is, I have just finished watching it and am kind of at a loss how to explain it other than it has cult written all over it. Originally it was released in black and white, I believe it was only 2008 that a coloured version was created, and later this month a special edition is due to be released but I will mention more about that at the end of my review.

The Hercules family move into a house that just so happens to have a doorway in the basement that leads to the sixth dimension. In this realm lives King Fausto (Herve Villeechaize) and his sadistic wife Queen Doris who enslave or kill anyone who enters the zone. Susan B. 'Frenchy' Hercules (Marie-Pascale Elfman) who has recently returned from studying in France learns of this place from her family and ignoring their warnings decides to check it out. Upon arriving she is promptly captured and so it falls to the rest of the Hercules family to attempt a rescue. 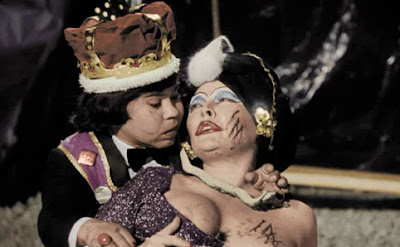 This is a musical, with all the original pieces written by Danny Elfman (the first film he ever scored in fact) who also plays the bit part of Satan. Other than the main theme the musical numbers are all pretty forgettable but the main one is quite catchy. Surreal is one word that comes to mind when trying to get a sense of just what this film is. Characters are all larger than life and prone to pulling faces constantly and exaggerating their movements like they are cartoon characters. Many of the female roles are played by men, while the actual women are for the majority topless, I guess that's appropriate for the slave girls but this also applies to the princess who inexplicably is near naked throughout, and the Queen whose chest falls out her top on several occasions. It all gives quite a sleazy feel to the film, it very much feels of it's time, almost like a lower budget Rocky Horror Picture Show.

This bizarre feel is helped in no small part by the sets which all seem to be made of paper, caverns have paper rocks, rooms are sheets with windows and doors drawn on them, there did not seem to be a single real location used, this fact isn't hidden though, the exaggerated and sparse scenery fits in with the goofy oddball tone used. The actual practical special effects are terrible, flying people are suspended by visible wires while at one point a character has their ear ripped off in fake fashion. Again this is purposeful, rather than attempt to make a low budget film look good Elfman instead revels in the lack of money and highlights it. Forbidden Zone also features many animated sequences which are actually pretty decent, often combining live action with animation such as the intestine like tubes anyone entering the sixth dimension travels down. The look reminded me heavily of Monty Python and was impressive considering the time this was made. 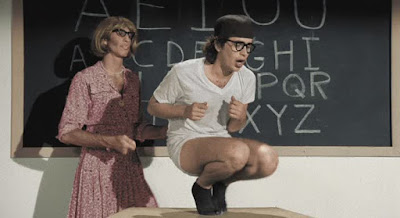 I think my main problem with this is just how down right creepy I found it to be, there is a sense of unreality to the whole film that made me a bit uncomfortable. The characters all act so crazy and strange that I could not relate to any of them, good or bad they all made me uneasy. The brother who is meant to be a young boy but is played by an old man, the boy who acts like he has chicken wings, the silent servant of the Queen who is a giant frog in a suit, even the heroine Frenchy; all did not sit well with me. It all had the feeling of being on an out of control chemically induced trip, something to endure, sure it is an experience but not a joyful one.

There are racist caricatures here, as well as blatant sexism with the portrayal as all females as sex objects and some homophobic slurs which don't sit well today but this is a product of it's time and the sheer exaggeration (such as a character in black face) of these could indicate a send up of more serious films rather than a declaration to offend. The plot is barebones but Forbidden Zone was intended as a showcase for Elfman's musical troupe long before any story was created which may go some way to explaining this. 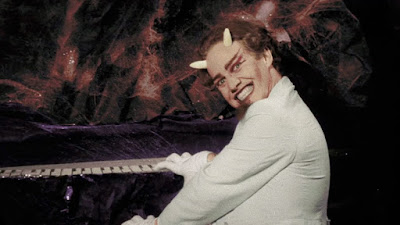 So that's the film itself and to be fair this is certainly something different and it does have the feel of a living cartoon. The pure randomness kept my attention for the 1 hour 15 minutes run time, though the creepiness was too much for me! On 29th September Forbidden Zone: The Ultimate Edition is being released on DVD, Blu-ray and digital as well as a soundtrack coming out. This new edition features both the original black and white version of the film as well as the updated coloured version, it comes with a booklet and bonus features including a commentary by Richard Elfman and Matthew Bright and a behind the scenes documentary. The very definition of a cult film and something quite unlike anything else, if your after something completely different then this is certainly your ticket.

Posted by Daniel Simmonds at 04:23