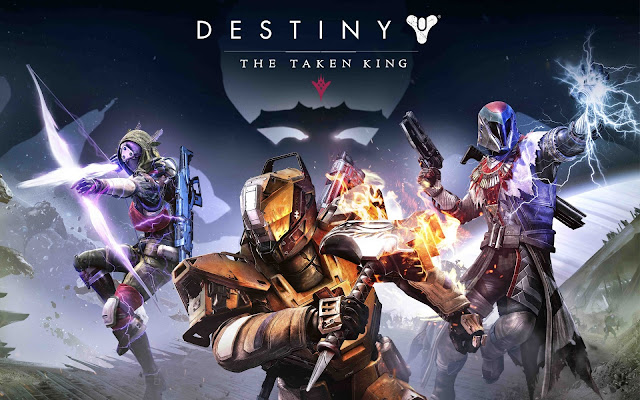 Destiny: The Taken King is the first major expansion for the much divided game, The Dark Below and House of Wolves add ons were minor updates but this new one brought in a whole host of improvements to the core Destiny experience. As always the price is a sore point for many, people see the asking price of £40 as extortionate for what is not an entirely new game. As it is I am kinda hooked on Destiny, it is my drug of choice and so I had to check it out.

Following on from The Dark Below and this expansions story again concerns itself with The Hive who are the demonic style alien race. In that first DLC Crota; a kind of God like being was prevented from being summoned to Earth, now his father Oryx has brought his almighty Dreadnought to our solar system seeking revenge on the guardian who killed his son. Oryx has a special skill in that he is able to control the Taken army. These soldiers are made up of possessed soldiers from every race of aliens. Your mission is to find a way to breach the Dreadnoughts defences and then hunt down Oryx and stop his threat. 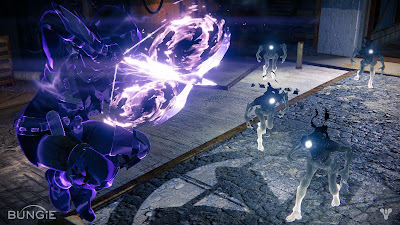 It has been pretty much universal that everyone playing The Taken King for the first time have commented that there is more story in the very first mission than exists in the whole of the core game...there really is! Now as well as get given story by your ghost you have constant radio chatter between the heads of the Vanguard. Also there are scanable objects in the levels that provide back story from your ghost. Until this expansion I didn't even realise famous actors provided the voices for this Vanguard. In particular Nathan Fillion as Cayde-6 becomes the new star as he provides humour to the histrionic game for the first time. His character is pretty stereotypical but he provides much needed brevity to the game.

A week before the expansion came out there was a huge new update that saw much of Destiny changed. The level cap was increased to 35, the awful light ratings needed to level up were removed so that pure experience will see you through (as it should have always been), weapons and items were rejigged and missions were all rewritten to make more sense. Missions and bounties now have their own screen in the pause menu and thankfully bounties can now be claimed without needing to go to a hub area. 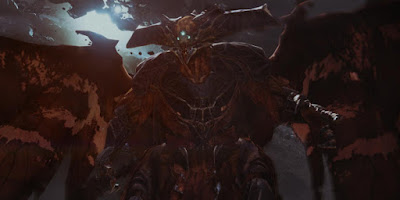 So what does The Taken King actually get you? The level cap is extended to 40 and Taken enemies now populate on all the planets when you patrol. There are around ten new missions. These missions take place on a variety of planets you have already seen but introduce new areas. The one set at the Cosmodrome for instance has you platforming your way up the huge space tower that is a visual icon in that location. There are around five new Strike missions which are fun enough but didn't feel very challenging, one ends in a fun boss fight against two Cabal commanders who have unique abilities. There are also a bunch of new multiplayer maps, I don't know if it's just me but mutiplayer in general seems easier now, the new maps are well designed and introduce more platforming elements as well as a few new modes such as Rift where you have to try and score goals. Finally there is a new Raid, seeing as I have never done a raid due to its requirement of only teaming up with friends this is pointless to me, might as well not exist.

The Taken comprise all the different enemies you have previously fought but now they all have different fun abilities. Thralls are now able to teleport around, Cabal enemies with shields can now fire out a powerful blast from their shield, all the enemies have really fun changes to them, my favourite being the Psions who can split themselves in two up to eight times (I believe). While these are all pretty much reskinned enemies that you have seen thousands of times before their new abilities really make them seem fresh. 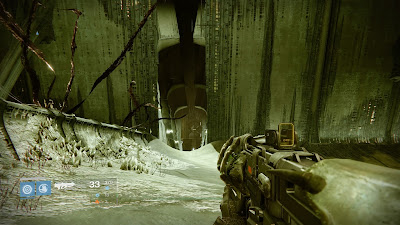 The biggest change is an entirely new area; the Dreadnought. This area is about half the size of the planets and has quite a few different areas to it. There are many side quests set here, such as hunting down calcified ghosts and gathering materials so that a new sword weapon can be created. There is also the Court of Oryx, this place is where you can summon boss characters to fight, there are always people nearby happy to help out. The new location looks quite pretty but as it's interior you cannot summon bikes which makes getting around a bit time consuming. From a game play perspective you get access to a load of new armour and each class gets a third sub class that also has it's own mission attached to it. The Hunter class gets a bow and arrow that fires void energy which is pretty cool. Also of note are the new tunes, the main theme in particular is excellent.

Is The Taken King worth the asking price? For me I would say yes, I have easily sunk 30 more hours into a game I was pretty much done with, after recently paying £42 for Until Dawn; a game I finished in two sittings it seems wrong of me to then say this expansion is not worth the cost. It is true that a lot of what I did, well at least a good third wasn't even part of the new expansion but the fact this brought me back still counts for something. As always being locked out the Raid is irritating but now there are quite a few normal quests where you can only complete them if you are teamed up with other players or extremely lucky, I guess it is fair enough the Raid is locked, but for normal side quests to also be locked away is a bit cheeky.

While I have done all the proper quests that came with this expansion I still intend to play to mop up the side quests I can do. There are improvements all around, there are still ridiculous load times but overall it has all been streamlined into even more of an addictive experience. If you ever found Destiny to be fun then I readily recommend checking out this new part of the game as it is a great experience.