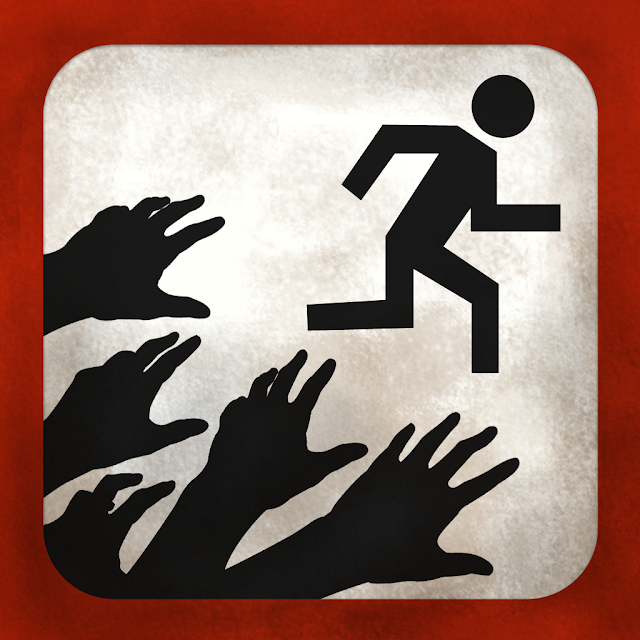 This review has been years in the making, literal years, for to fully be able to review this I first had to test it out. For those who don't know Zombies, Run! is an immersive running game and is designed to be 'played' by going into the physical world and running (or at the very least a slow jog).

Zombies, Run! takes place in a post apocalyptic Britain, a world over run by flesh eating ghouls. In this world the most valuable commodity is a decent runner, someone who is able to head out from the fortified towns in order to forage for supplies and carry out essential missions. It starts with you arriving via helicopter at Abel Township but things swiftly go down hill when an unidentified enemy shoots down the copter. After a swift run to the town you are designated as Runner 5. As you carry out missions for the township you come to learn of a conspiracy to cover up the origins of the deadly epidemic as well as a plot to destroy the town.

The story is told over 23 missions, each one is roughly forty minutes in length. The format is that you get a bit of story at set intervals with the in between time being when music from your phone can be played. It all feels natural as the story is told to you by your handler who communicates via a headset and so there is not a lot of immersion breaking. Each mission starts with the gates to the town being opened and gun fire from the sentries killing any nearby zoms, then its out to run on your mission. Like a season of a TV show there are both plot based missions as well as more filler ones. There are even a few two parter missions to keep you wanting to come back for more. 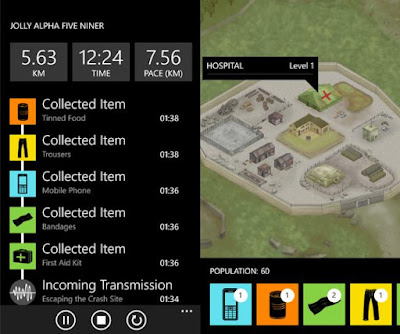 As you run you pick up supplies which is heralded by a robotic voice informing you of what you have found. Items collected can then be looked at in the codex on the app which provides more information on the them. A lot of the time I seemed to be picking up sports bras and underpants which was a bit odd to be honest! There are also some files you find that can be read, a few even contain working email addresses that if you contact in the real world will reply with an automated message; pretty cool.

For every mission you complete you are given building materials, these materials can be used to build up your base. One of the sections of the app has an overhead view of this base. Playgrounds, housing, a hospital and many other constructs can be built here, all requiring materials. If you run out of room the base can be extended, and later on it turns into a juggling act as buildings can all be upgraded but only after certain criteria has been met. Upgrades require a certain amount of population, population happiness and a high defence rating, also many can only be upgraded once other buildings have first been upgraded. This was by far the most addictive part of Zombies, Run! and is what got me coming back much more than the well acted but not as engaging story. I did find some issues though with the right amount of materials not being given for completing missions. Over the two years I have been doing the app there have been many updates and I think maybe it was an update which increased the amount of materials.

What helped most for me was that the majority of the runs in the story take place out in woodland, now the place I run is also a wood and so it was easy to really feel like I was Runner 5, I could imagine zombies being in the woods, of helicopters flying over, and of being chased. When I first started using this app it was nowhere near as detailed, it had a huge visual overhaul which included even more background stuff such as interviews with the characters you come across and rules for being a Runner. In addition to the actual story missions and base building mini game there are also a bunch of other options. Airdrop has you travelling to a location in the real world to retrieve a supply drop, Supply is just an unlimited length run, there is also Interval Training, and Race which offers you either a 5K, 10K, or 20K run. None of these additional modes earn you any building materials but the races do give you additional stories so I felt the need to do them. Also as an aside if you finish the mission and are still running then you get access to Radio Abel which is as the title suggests is a spoof radio show.

While I did love this app it is not entirely perfect, it can be fiddly to choose what music plays as you run, this is more to do with Apple constantly changing their music section of the iphone. I found on a few occasions that my progress in a mission was not saved when I went back to it, occasionally it would skip ahead too far or make me start from the beginning again. An option to skip story if you had heard it before would have been appreciated. In season 1 a few of the missions seemed out of order, after a particularly riveting two parter in which you are stranded out in enemy infested woods it then goes on to a comedic mission that has you heading to a games store to get some Dungeon & Dragons figurines. This was a tonal shift that seemed weird, especially as the mission after the filler one then starts talking about the stranded mission as if it had only just taken place. There is an option to occasionally be chased by zombies, you are meant to sprint at these points to avoid the undead lest you loose supplies. I really did try with this chase mode switched on but it seemed no matter how fast I ran I just could not avoid getting attacked, a bit too hard to be worth the extra effort.

I really cannot remember how much this cost me but there are constantly deals going on and it is still being added to with Zombies, Run! currently enjoying it's fourth season, Season one is 23 missions long but season two and three both clock in at around 60 missions and so there is years worth of running to be had so I feel it is worth the money what ever it currently costs. Unless there is anything significantly different I probably wont be reviewing the seasons on their own.

An app that lets you role play as a zombie apocalypse survivor and which also trains you to cope with the inevitable collapse of society to a rampant undead virus; pretty much essential if you feel the urge to loose weight or stay fit!