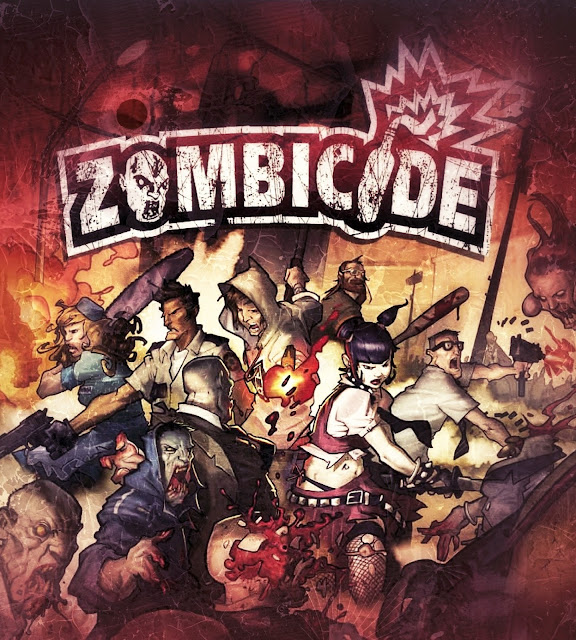 Zombicide is a board game in which you try to survive a zombie apocalypse while completing missions playing as one of six characters. I was given this game for free to review but funnily enough it was only a few months back I had actually been considering getting it of my own accord.

This game is designed for co-op play and all the missions are geared around working together with up to six people able to play at once, what I immediately loved was that this is actually even playable on your lonesome, something which Zombies!!! (the only other undead based board game I own) lacked and led to it gathering dust on my shelf. The characters you can choose from each have different special abilities that are at least initially exclusive to them. Phil the cop starts with a pistol, Josh the thug is able to move normally through squares occupied by the walking dead, Doug the office worker automatically gains duel weapons if he picks up a weapon with the duel symbol, Amy the goth has one free move action per turn, Ned the doomsday prepper has one free search action per turn, finally Wanda the waitress is able to move two spaces for every turn rather than one thanks to the roller skates she wears. 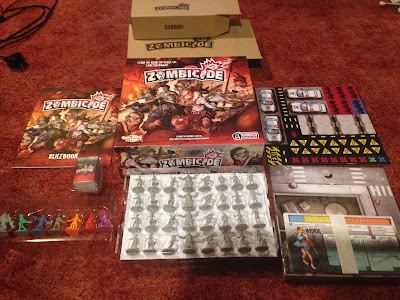 The board is comprised of large hard cardboard squares that have a partial layout of buildings and streets on them and are double sided. The mission section of the instructions shows how these are laid out, so these are not randomised, and you are able to see the entire board from the start. Interior locations on the board need to be entered via a door which itself needs to be broken open with an appropriate weapon (such as a crowbar or chainsaw), these areas can be searched which involves the player taking a card off the equipment deck. Exterior locations cannot be searched, however some missions include vehicles which can actually be driven around the board! In the many games I played I did not actually get the opportunity to try this so I don't know how well that works.

So each of the ten missions included have a specific mission goal, Mission 7 'Grindhouse' for example requires you to neutralise the two zombie spawn zones (more on that later) while Mission 4 'Drive-By Shooting' requires you to travel around the board collecting objective tokens before making it to a spawn zone. These missions all have a little introduction story giving you reason for your actions. Just ten missions may not sound a lot but there is plenty of replay to be had, and a quick search online leads to a lot of official free additional missions to play. 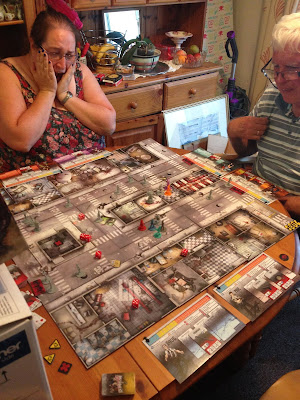 Included with the game are 71 minis which are small plastic figurines. Six of these are of course the player characters, identified by different colours, the rest of the pieces are of course zombies. Zombies comes in four different types. There are the walkers; the traditional slow moving undead, these come in four flavours, both male and female. Next are the runners, these as the name suggests take a more modern spin on the moving corpses and as such move twice as fast as the walkers. Thirdly are the fattys, these zombies are giant and while they do the same amount of damage as any other corpse they require a weapon that deals two damage to be killed, if that is not enough they also spawn with two walkers. The last zombie is the dreaded Abomination of which there is just the one figure. This monster requires a weapon that deals three damage, in all the games I played this one only appeared once and never actually got to attack any of the humans thankfully.

The basic rules for Zombicide are pretty simple despite a slightly daunting amount of instructions. Each character has three actions per turn, these include movement, searching, attacking a zombie, swapping an item with another character, arranging their own deck (there are a maximum of five items a character can hold, only two of which can be in the primary slots), or even making noise. After all characters have moved it is the zombies turn. Each zombie on the board heads towards the biggest area of noise. Without getting into too much details a lot of actions characters do cause noise, zombies always head towards the loudest noise source unless they have eye contact with a survivor in which case they will head towards them. If a zombie is on the same square as a human then they attack and automatically hit one of them. Characters are only able to get hit twice before they are permanently dead. Also in the zombies turn a zombie card is pulled out for each of the spawn points on the map which governs how many undead turn up on the spawn point. When a door to an interior is opened for the first time a zombie card is pulled out for each room in the building. After the zombies go it is back to the characters. 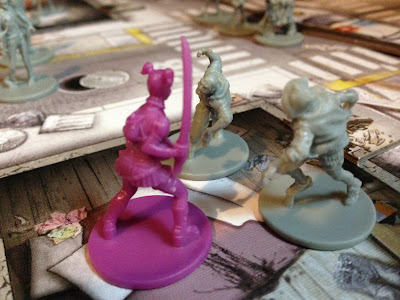 This is co-operative in the truest sense of the word, lone wolves will die. An early example is a game I had with a friend where I went off and opened a door without anyone else being near me. This lack of teamwork meant the character who opened said door quickly got surrounded and killed. This was an early lesson not only in the importance of working together but also the realisation that Zombicide can be a deeply tactical game. Players control the zombies and who they attack so deciding amongst yourselves which character takes a hit for the team in an interesting concept. Many times during my game I played there would be long discussions on plans of attack and routes we should take, it makes for a more involving game and gets you a lot more invested than if you were on a set route.

It made for such a nice change not to be glued to a TV or computer, I have never been one for board games but this was a lot of fun, I played it with various people and even my Dad admitted that it was not a bad game. I tried it alone as well to see how that fared and again I found it an enjoyable and absorbing game to play. For a board game it carries a lot of video game tropes. Characters earn experience points from killing zombies and completing objectives that leads to them levelling up. Levelling up results in gaining new abilities you get to choose from for your character but on the flip side it results in the danger level going up. Starting off blue it goes to yellow, orange, then finally red, each level results in an increasing number of zombies turning up when zombie cards are pulled. Also the game contains a tutorial mission which again felt like a video game type thing. I loved this melding, it worked fantastically. 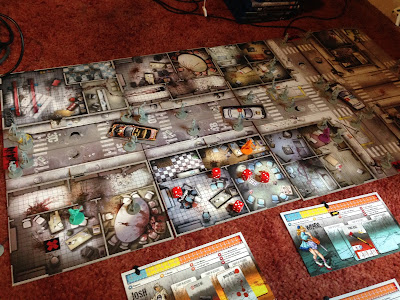 So the negatives then? First of all mention must be made of the price. The RRP is £70 which is a heck of a lot of money, it seems to generally sell for £60 new. Everything about this game is luxurious though, everything from the box design to the playing pieces, tiles and cards are sheer quality, nothing is flimsy. In my preparation for this review I carted the game all over town (even half way across the country to Wales) and it led to no wear and tear. There is immense replay value for this though and I can say honestly that this is something I am going to continue playing as it is such an entertaining product. There are a lot of rules to remember, each time I play I realise a rule I had forgotten about the game previous, controlling multiple characters can lead to confusion and forgetting characters specific abilities. The last real minor issue is that Phil is a dark grey playing piece, zombies are light grey and so quite a few times he would get mixed up with these, is a shame his character piece wasn't a different colour as the rest are bright and easy to spot (red,purple, green, orange and blue).

Overall I really enjoyed Zombicide, far more than I expected to, I had worried it would be too complicated and maybe even boring but it is neither of these things. There for sure are a lot of rules to get your head around, this is not something you could play while intoxicated. I was blown away by the quality of the board and its pieces, there is so much attention to detail even down to character bios on the side of the box. Impressive stuff and something I would readily recommend.

Zombicide can be purchased online or if you wish to buy it in the physical world then the store locator (here) can be used to find your nearest stockist.
Posted by Daniel Simmonds at 08:12