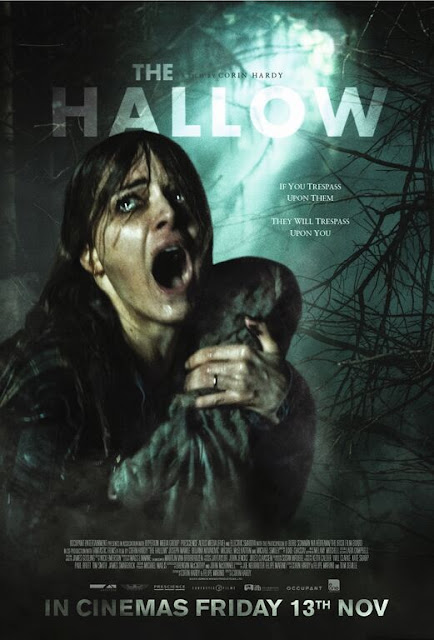 I have finally gotten my internet sorted out (I think) and so to celebrate here is a news post about an upcoming horror that certainly sounds interesting. The Hallow is an Irish based horror that is the directorial debut of Corin Hardy and has already received critical acclaim at the Sundance and Edinburgh International Film Festivals.

A London based conservationist is sent on assignment to Ireland to survey an ancient forest, and so heads there along with his wife and baby. However he is met with some resistance in the form of superstitious locals who believe the woods are the hallowed ground of magical creatures. Despite their protests he carries on with his job only to unwittingly disturb a horde of strange beings and so the terror begins for both him and his family...

Joseph Mawle stars as the conservationist Adam Hitchens, while Bojana Novakovic plays his wife Clare. I was also pleased to see Michael Smiley in the trailer (The World's End, Spaced). I like the idea of fairy tales such as...well fairies being put into a horror setting and the Irish setting is also interesting as not too many horrors are filmed there (Boy Eats Girl the only one springing to mind).

The Hallow has it's first showing on the 29th August at Frightfest and so if your lucky enough to be going to that then maybe check this out if you like what you see in the trailer below. For those of us not going The Hallow is due for release in the UK on Friday 13th November. So first the trailer:

Also for your viewing pleasure is a short clip from the film which may be the first signs of the horror to come for the unlucky family: