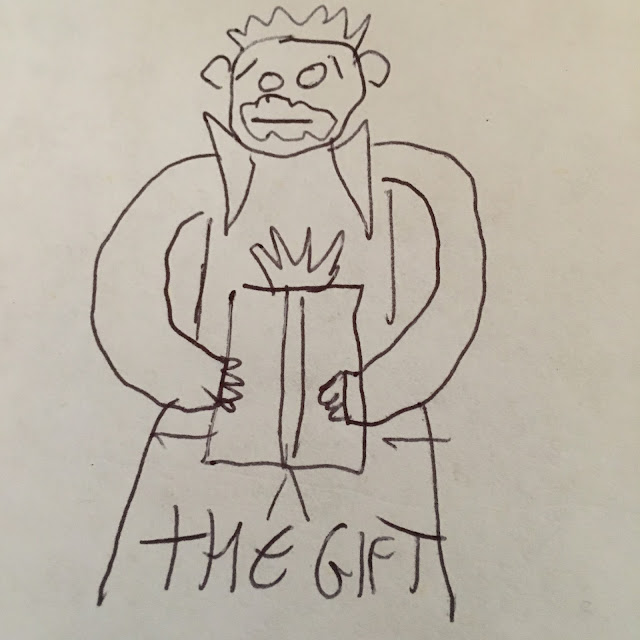 The Gift is a thriller and as such only just about qualifies for a review at The Rotting Zombie. As always I hate trailers and the one for this was no better than any others, especially as it actually gives a false impression of what this movie is actually about. On 14th March I received a copyright claim for this review stating I had to remove the images. In the nine years I have been doing this blog that is the first in over 1500 posts that I have had this happen. That will be why you see my own drawings rather than screen shots. As I am petty and this is in fact a fan blog that shouldn't be getting ridiculous claims like that I have marked this film down another zombie head for the inconvenience.

Simon (Jason Bateman) and his wife Robyn (Rebecca Hall) have moved to California to make a new start. The two haven't been in the city long when Simon has a chance encounter with a former class mate; Gordon (Joel Edgerton who also writes and directs). After this meeting Gordon starts leaving expensive gifts at their house and keeps turning up when Simon is at work. Becoming uncomfortable with this intrusion and with the reveal that Gordon has always been a strange person he is warned to stay out of their lives. Not long after strange things start occurring around the couples house, something that happened in Simon's past is coming back to haunt him, and that he may not be quite as innocent as at first appears. 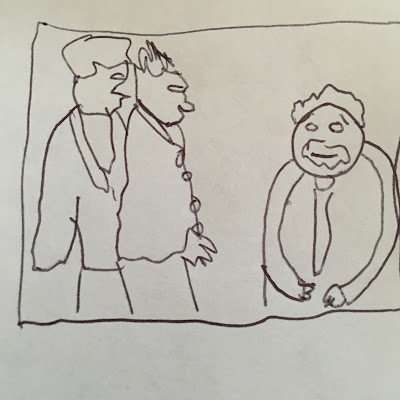 I didn't enjoy The Gift, it was only a few days back when reviewing Julia when I stated that you don't have to enjoy a film to think it's good, however I don't think this was an amazing film, despite that it has a lot that is right with it. There are three distinct phases to this film, fittingly they slot into a beginning, a middle, and of course an end. The first part concerns itself with the stalking of the couple by Gordo the weirdo (as Simon calls him), the trailer insinuated that this would be the meat and bones and yet a lot of the film this creepy character is not even in it. There are a couple of jump scares, one of which was very effective but more the suspense is built up from the expectation of something happening. I thought this was a great way to start, but my sister who I went to the cinema with thought it was too slow of a build up.

The second part of the film feels a lot more generic with it focusing on troubled Robyn and her search for answers as to what happened in Simon's past. This was where a few issues with the choice of actors hit me. Bateman will always be best known to me for the comedy Arrested Development, he plays a serious role here but sometimes I just couldn't help imaging he was the same character from that show and so his lines lost their impact. Another character who only briefly pops up but who has a huge effect on the plot then appears, the only thing I had seen him in previously was The Office (of course another comedy) so again I struggled to take him too seriously. 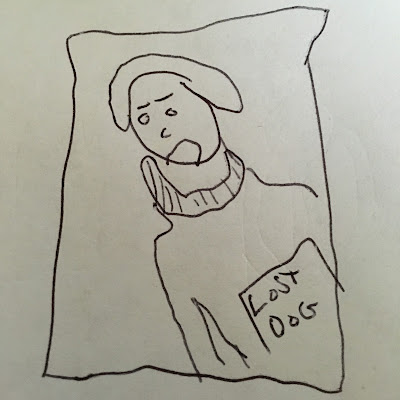 Thankfully after all this the final third really does what I imagined the whole film was going to be. It was suspensful and thilling and I had my heart in my mouth, tense with a chocking type of fear. The writing was shown to be really clever and there was some really interesting twists and a neatly tied up theme. I loved this whole sequence, reminding me a bit of Seven. Edgerton's portrayal is spot on with his character really having a sense of creepiness to him. Batemans character was really interesting in the way he at first seems innocent but as more and more layers get stripped away you see what sort of a person he really is. Just who the bad guy of the film is gets blurred, but either way Robyn is in the middle suffering the most. Her character seems to share more similarities with Gordo than Simon which was an interesting aspect. 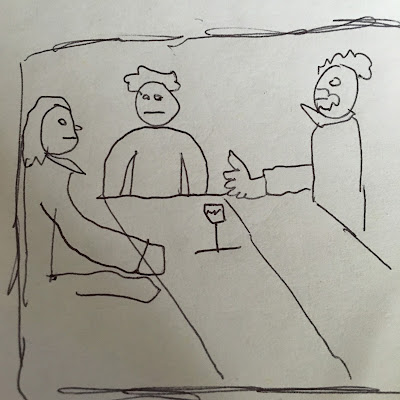 There is some great misdirection here; dream sequences, a shared sense of paranoia and well thougt out themes of lies and your past coming back to haunt you. The couple house full of huge windows is almost a contrast to the web of lies Simon has built around his perfect life while the mystery of what once happened did keep me engaged.


The Gift has a lot of good acting, a lot of drama and a decent amount of thrills but it didn't really get engaging until that last third. If that same amount of tension and mystery could have been sustained for the whole film rather than just the final part then this would have been something really special. A decent enough film which does make you think but doesn't do enough to be called essential viewing.