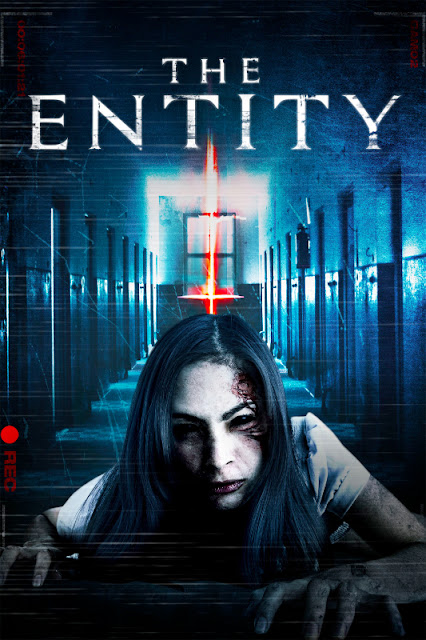 The Entity (or La Entidad as it is also known) is a Spanish found footage horror. My face dropped when I realised this was found footage and I started the film fully expecting to hate it, especially after a confusing mess of a start which may have been down to badly translated subtitles maybe.

Four friends; Carla (Daniella Mendoza), Jacob, Benjamin and Lucas need to make a project for their film class at uni, Carla suggests that they look at reaction videos to try and work out what people are reacting to in these videos (or something). The first one they watch has three people watching a video off screen that leads them to scream and cry at what they are witnessing, Carla realising she knows one of the trio suggests they go to his house to ask him what he had seen. Upon arriving they find out that him and his two friends from the footage recently died in a horrific fashion. This sets up a series of nightmare events for the group as their investigation leads them to the film the three watched, it seems whoever watches the video is destined to die a terrible death... 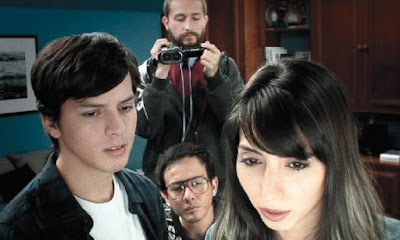 For a found footage this actually isn't bad, the initial part of the film featured heavy use of shaky cam, terrible stuff which really made me not want to continue, but I'm glad I did as it settled down into what is mostly steady camera work. The film quality throughout is quality stuff, there seems to have been some good cameras used for the filming which made for a nice change. Rather than be set in the one location there is a bit of variation with the worst parts actually being in what should be the creepiest location; that of a huge grave yard. There is a lot filmed in the characters bedrooms also, these bits worked better as having horror invade the home and via the use of technology was an interesting choice. In fact much of these home scenes actually reminded me a lot of Unfriended with characters sat on their own communicating via Skype as they try to analyse the footage they filmed at the grave yard to make sense of what they had witnessed (a similar plot device used in Book of Shadows: Blair Witch 2).

By tying technology into proceedings, mixed in with religion and the whole internet culture the film manged to straddle a thin line quite well, at times feeling like Silent Hill, other times The Blair Witch Project this did enough to never be boring. The English subtitles are clear and well translated it seemed, and while the characters don't really ever say anything too interesting at least a few of them get to actually show personalities. 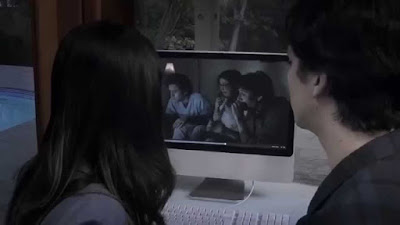 The plot actually gained my interest, I wanted to find out what was on the cursed tape to elicit such over the top reactions, and I wanted to find out just what was killing people. The death sequences are all quite cool, there is plenty of blood spilt and the make up effects on the characters looks pretty great. Early on for example in the background you see someone plummet out the sky, was neat. The effects for the scenery are all pretty great, a scene in a library was unsettling with gears all suddenly spinning, while later statues seem to move thanks to subtle CGI. There was one scene where the camera is on a character sat at his computer, a split second before the scene changes I swear a demonic arm appeared in the background, it was so brief that I doubted myself that I even saw anything. These sneaky little effects inserted into the film I loved. There are a few floating people later into The Entity, they did kind of outstay their welcome as I'm pretty sure they were suspended by wires.

It is not all good though, the actors seem to be good at their jobs but the actress who plays Carla seems to struggle with showing any emotion, a scene where she is meant to break down after learning of someones death was ruined by her struggling to show sadness! At times the film is padded out with lots of characters driving around to various places for no real reason, one bit in particular felt really tacked on. There is a big plot twist at the end which makes not much sense at all, it left me with more questions than answers and even a clever black and white recap that showed the evidence for this twist hidden throughout the film couldn't save things as it led to massive plot holes everywhere with motivations making zero sense at all. 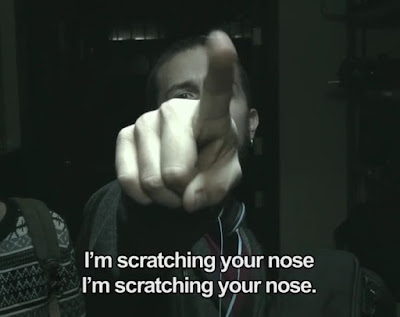 As a found footage the need to constantly have the film crackle and glitch was not resisted, I already know it is supposed to be found footage; you don't need to keep inserting these annoyances in to remind me it is one, the same goes for the sound loss, several points the dialogue is all muffled while the camera adjusts. At several points the picture goes entirely only to come back on to what is obviously characters standing in place ready to act out the next scene.


The Entity is of a much higher quality than I ever expected, it is a good horror though it is flawed in lots of places. I was impressed with the special effects, thankful the CGI effects were sparsely used, and the plot while simple and not making much cohesive sense (at all) was still enjoyable to follow. For a genre I pretty much detest I could not stop watching, so that shows this movie does at least a few things right. This isn't a great film but it is dumb fun. The Entity is out on DVD and Digital on 12th October 2015.