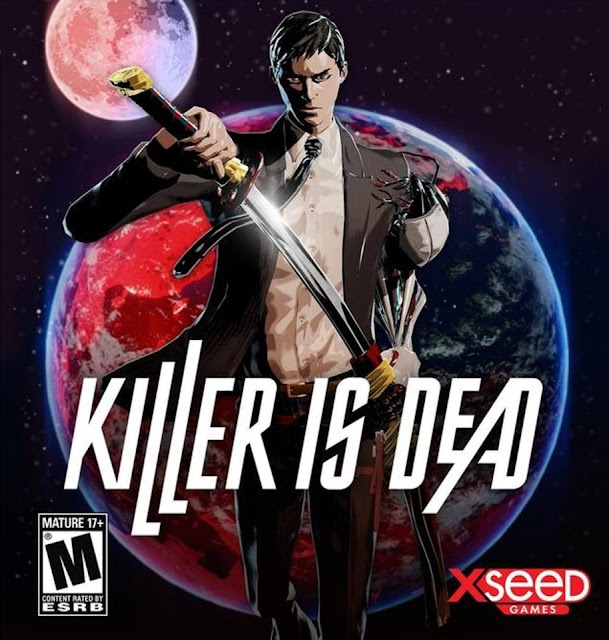 Killer is Dead is another game from the talented genius Suda51 (Killer7, Lollipop Chainsaw, Shadows of the Damned) whose games are know for their distinctive style and coolness. I have a real soft spot for these types of games.

In Killer is Dead you play as an assassin; Mondo Zappa who works for the Byron Execution Firm. This company is tasked with taking out dangerous criminals and assassins from around the world. With all your marks seeming to be possessed by a substance called Dark Matter, Mondo soon learns that a mysterious man named David is responsible for the spread of this evil and so sets out to stop him. 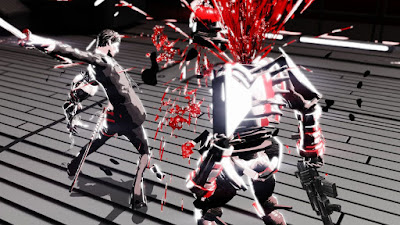 As with all Suda51 this game is very stylish and distinctive that despite it's linear style comes across as something special. I love his games, and this is no different but this time around there seems to be less meat on the bones than what I am used to. For the most part Killer is Dead reminded me most of a scrolling beat em up, Mondo is armed with a katana as his primary weapon, though also has an artificial arm that can shoot bullets and ice bullets as well as transform into a giant drill. Levels consist of you going location to location battling 'Wires' which are humanoid looking monsters. Defeating these creatures results in experience for your blood and health meters as well as points dropped that can be used to upgrade your skill set (such as recharging health quicker or unlocking now moves for use in battle). Your blood meter governs your secondary weapons power as well as can be used to one hit kill enemies, in fact the larger enemies and bosses can only be defeated via a one hit kill ability and so it is important never to totally run out of blood.

There are twelve main missions which all follow a similar format. You get an introduction cut scene followed by a simply designed level in which you fight wires, it always ends with a fun (yet easy) boss fight against your target followed by an ending cut scene. Each finished chapter usually results in a few side missions unlocking which set you tasks in the level you have just done. Rather than be boring though there is always something new to do with interesting gameplay mechanics coming into play. One level for instance has you riding an elevator to the top floor of a factory, but with a weight limit of just two wires you have to quickly defeat any enemies who appear. Another side mission had an evil doll that was constantly sapping your health, your tasked with lighting eight torches hidden around the level before collecting the doll. These missions while simple sounding were all a lot of fun and really showed some inventiveness that the main missions actually lacked somewhat. 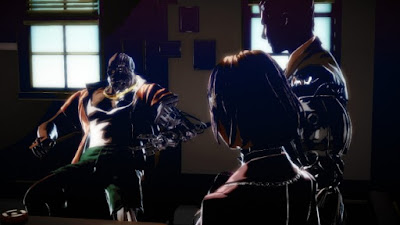 The look of the game is really quite weird, the colour is all out and looks odd, but this was the look gone for, it reminded me a bit of the way the Sin City comic books looked but with darker colours instead, the shadows on your character and the areas you travel to are all murky and sometimes it can be hard to pick out Mondo from the surroundings. This is built into the levels though, it is no accident. One level in a vampire's castle has you needing to light torches just so you can pick out the surroundings. Locations are varied and it was always a joy to see where you would be going next. After a weak few initial levels (one essentially a tutorial, one just consisting of one big room pretty much) you travel to some eclectic locations such as Area 151 complete with rampaging giant, a Yakuza's Japanese garden, and even the dark side of the moon.

The normal enemy types have a uniform look to them, they kind of resemble robots, they come in various sizes and armed with a host of weapons including guns, swords and clubs. Bosses are where the game really steps up a gear as they are a lot of fun to fight and all vastly different from each other. There are also many different stages to them with you gradually mutilating them until with a held down R1 you finishing them off by beheadment. They are a memorable bunch with personal highlights being a fight against a possessed steam train and a battle against a man whose tattoos help him fight. 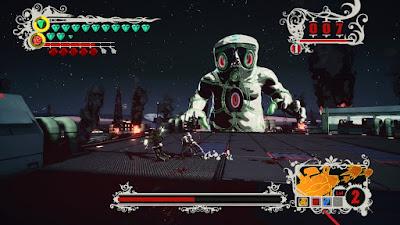 Somethings about the game left me a little more cold though. The plot is really quite simple but thanks to the way it is told it seems more complicated than it actually is. Now that I don't mind but there are a few chapters that consist entirely of dream sequences, the first of these in particular was quite boring due to the inability to do anything but slowly walk around. The plot twists that you get from these levels were nothing special at all, not a single twist really got me affected. On top of the missions and side quests there are also bizarre dating mini games. These mini games have you trying to win the heart of a particular woman, you do this by perving at her body and offering her gifts, you have Gigolo glasses that when used let you see through the woman's clothes. I found these mini games to be unnecessary, it's not even so much that I disapprove of this sexism, more that they are kinda dull to do and feel too removed from the rest of the game even if you do unlock new weapons for doing them.

I did have fun playing Killer is Dead, I never got completely hooked but the actual gameplay is a load of fun and very bloody and satisfying, while the boss fights as with all Suda51's game are very inventive, special mention also must go to the fantastic soundtrack! For me I just did not find the plot that engaging, when it was all finished I did not feel too bad that there was nothing else to do. It took me just over nine hours to complete but did seem to fly by, I played on normal difficulty but found the game to be very easy so I would recommend doing it on hard mode. Despite my complaints this was not bad and certainly if you like the style of Suda51 then you will need to play this.