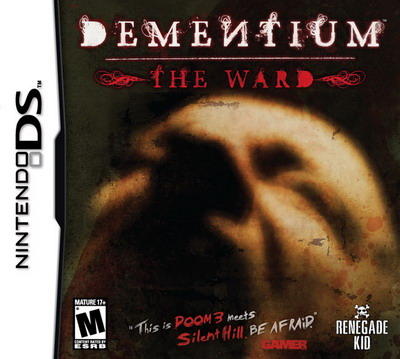 I'm unsure if this is good or bad timing on my part but earlier this year I brought Dementium II and so I thought I should replay the first one for review. This morning I discovered that Dementium and it's sequel are going to be re released on the Nintendo 3DS later this year with improvements made and that a third game in the series is to follow after that.

The game starts with you on a wheelchair being wheeled through a nightmare psychiatric hospital populated with monsters. After being left alone in a room you get to try and find a way to escape from the hellish place. During your escape a creepy little girl and a tortured woman frequently appear to show you the way, while clues you discover seem to indicate that you might have had a shady past... 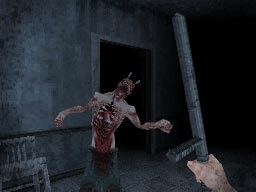 Dementium is a first person level based survival horror that sees you controlling your movements with the buttons but using the DS stylus to move your on screen hand around. Starting off weaponless you soon get access to a torch that lets you see in the dark environments, and then a crowbar. Later on you get access to firearms also such as a shotgun and pistol. Combat is ok but there is not much depth to it, the main enemies being zombies with stakes in their eye sockets, and with an exposed heart showing on their chest. Other enemies include leeches and flying screaming skulls along with a few other ones, not too much variation.

Bosses appear every now and again and while they look decent enough they are usually an exercise in frustration due to them showing up at the end of a level meaning if you die you have to re do the entire thing again. My biggest complaint with Dementium is that while levels are around twenty minutes in length each it is still super annoying to have to start over whenever you die. To make this more anger inducing whenever you go through a door you get a little message that says the game is saving, yet when you die the only option you are given is to start the level from scratch or quit to the title screen, I don't have a clue what is actually saving when that message appears! 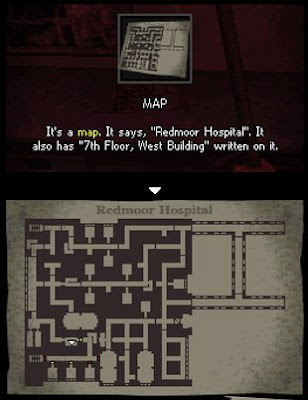 The hospital you are trapped in feels authentic, but maybe too much so, each level is pretty identical to the last with the many floors of the place being set out as if it were a real hospital; lots of identical rooms and corridors. Occasionally you get some variation such as a stint out on the roof of the building, or visiting the chapel but mostly it is all so similar. That said there are some cool bits. Early on your in the baby ward, this heralds in the introduction of the leech enemies which squeal like babies and first appear coming out of a cot. The graphics for the most part are pretty patchy, it was cool a first person game was made on the DS but leads to some bland and blurry visuals.

Most the levels have a maze type structure to them and feature simple puzzles along the way such as finding combinations for locks, or assembling pieces of a missing photograph. You find files dotted around the place but these are quite dull and don't really add anything to the mystery of where you are. I did appreciate how it really makes you feel trapped, the trick of getting outside thinking your home free only to find you are not is something that Outlast later copied for it's own. As a maze like place you are bound to get lost, unfortunately enemies respawn whenever you go back to a previously visited area meaning many times you get to a boss with limited health and ammo and so stand no chance of surviving. 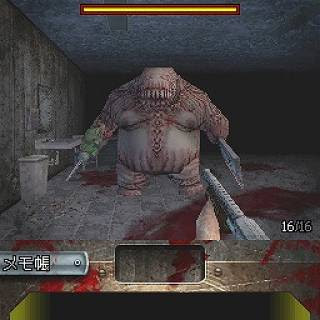 The best part of Dementium is the fantastic sound design. The music is piano based for the most part and fits the vibe of the world perfectly. Even better are the sound effects, the monsters all sound great, and the initial starting area with it's flashing red lights and monotone emergency broadcast announcement do a lot to get you immersed in the world. The plot doesn't do as much as I had wished though and it all ends on a bit of a bizarre note with no real resolution to anything. I had planned to replay this game for review but I was not enjoying it at all really, seemed to be a lot more hard than memory had me believe.

This is certainly survival horror but with an updated version soon to be coming out there is just no point in playing this old one, I'm really hoping the many issues get fixed as they do stand in the way of a cool horror and it may actually turn from being mediocre to something that is actually good.