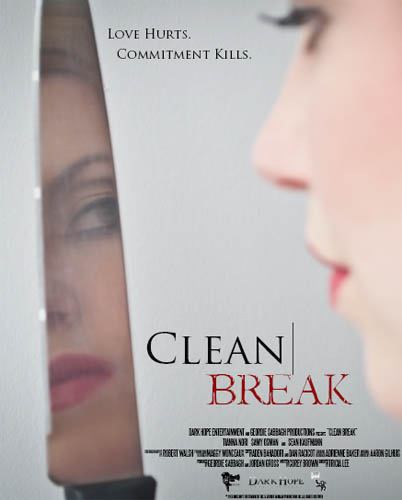 Last week it was Silent Retreat, this week it is director Tricia Lee's first feature horror film Clean Break that I review. This won best drama at the Atlanta Horror Film Festival. Due to internet problems it has taken me all weekend to watch this film so was viewed in many different parts.

Cam (Samy Osman), Dan and Scott are three housemates whose life revolves around having a good time, however Scott is after something more and after meeting seemingly benign Tracy (Tianna Nori) at a party she moves in with him much to Cam's dismay. While Cam thinks Tracy is not a good person little does he realise that not only is she not nice but that she is also a psychopathic killer who will do anything to ensure the perfect relationship for herself. 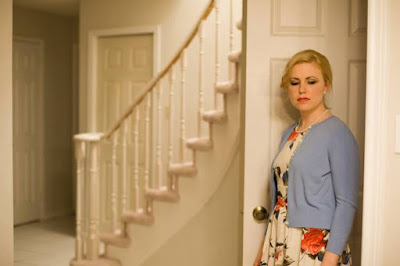 For much of the 85 minute run time of Clean Break it plays almost like a drama with horror only really appearing towards the bloody finale. It is more a look at the effect relationships have on close friends, everyone knows someone who has gotten with a boy or girl who has tried to change them and turn them against their friends. The tension in the house between Cam and Tracy in particular is well done and at times even made light of with a couple of montages of the two trying to get one over on each other.

Of the four main characters Cam has the most background given to him but on the whole he is not that likeable with his questionable ethics on how to live life, Dan has nothing really to him, while Scott is a complete wet blanket and soon gets wrapped up around Tracy's manipulative little finger. As with Silent Retreat all the males characters are flawed, a hint of anti-male sentiments here again, but Tracy herself is saved as the most flawed and awful character. She is irritating and controlling with no redeeming qualities at all, her motivations are twisted, and while she gets a fun quote explaining the title of the film she is just someone I wanted to be stopped from the off. In that respect she is played well, as the bad guy she should be someone the viewer wants stopped. Cam is the perfect foil to Tracy and this rivalry was well written. 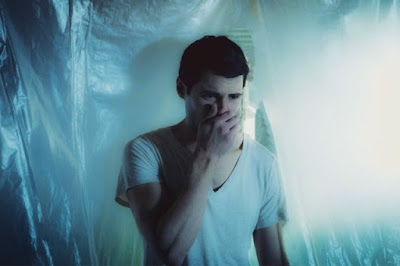 A lot of Clean Break takes place in the house the trio share, the majority in fact, this is ok except the set design is very dull with no trace of personality seen in any of the furnishings, even the bedrooms are minimalist, it doesn't feel like a lived in location.  The acting on the other hand is not bad, there is no one terrible here, even Tracy seems somewhat believable at times, though her psycho parts turned her into film villain rather than real. As I said previously there is not much horror but when the violence does come it has some decent enough wince inducing effects, and some classic horror shots such as a shadowy figure appearing behind a character all of a sudden. One scene in particular is full of suspense and reminded me of Hitchcock which was a good thing.

This is a solid drama and flows well and is well shot but all in all it wasn't really for me, the subject matter was relatable in a way, but I was itching for a change of scene. If crazy psycho ladies are your thing though then check it out. It is currently available to buy on iTunes and comes out on DVD 25h August.