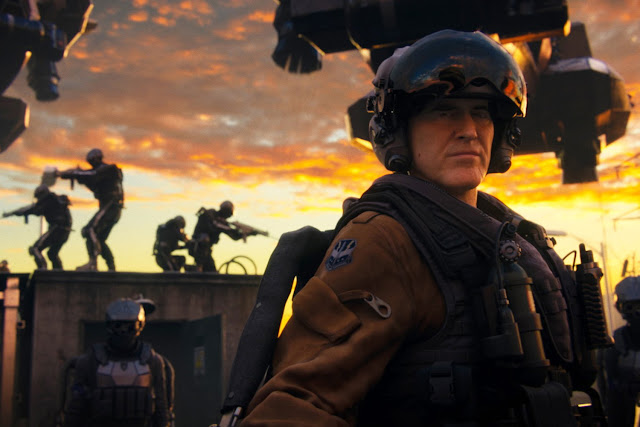 Warm on the heels of last weeks impressions of the second Exo Zombies map for Call of Duty: Advanced Warfare comes my views on the third map Carrier that came with the Supremacy map pack. This time the action takes place on an aircraft carrier .

The introduction cut scene shows Caption Lennox (Bruce Campbell) executing Oz (John Malkovich) before getting his soldiers to knock out the remaining three; Lilith (Rose McGowan), Kahn (Bill Paxton), and Decker (Jon Bernthal). His Sentinel soldiers then launch an assault on an Atlas aircraft carrier but Oz in the meantime has reanimated as a zombie and escapes...so the madness starts once again. So this time around Campbell joins the playable survivors which is a great thing! 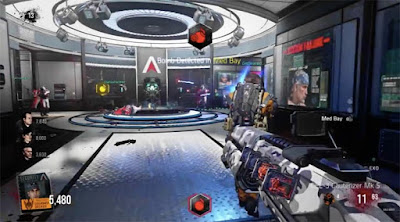 I love the design of Carrier, it is quite large but the way it is set out means it is not a difficult map to learn with it being almost symmetrical in its layout. You start the map in one of two locations, both of which lead out to an armoury where weapons, a 3D printer, and an upgrade machine are located. The map features two decontamination chambers and plenty of quite large rooms, largest of which is the hanger where the Exo-suits are located. There is some fun level details such as live sharks in tanks, zombie dogs and zombies in vats, as well as medical rooms displaying Oz's stats.

Zombie wise there are the usual growing assortment, zombie dogs now have their own round back to themselves, while teleporting zombies join the fray. Each map has it's own special round and this time around you get a round where you have a time limit to find and disarm a bomb, this is made harder by human enemies who guard the bomb, thankfully their weapons do not do much damage. 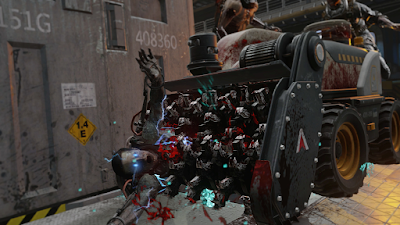 There are some great new weapons and power ups, one shaped like a star makes your characters able to instantly kill any zombies they touch, while the other new power up gives your weapons unlimited ammo without the need to reload for a set time, both of these are great. There is a new Exo-suit ability called Stockpile, I never actually gained it but I assume it makes your ammo holding abilities a lot better. Perks which drop from the sky include a turret that sends out a pulse that slows attacking zombies down, while my favourite summons an assault squad of three friendly soldiers, darn useful! A flying saucer pops up every now again that holds a random power up, while triggering the defense mechanisms summons a cleaner robot that mashes up any zombies it crosses paths with.

This is actually maybe my favourite map of the lot, perhaps more fun even than Outbreak, it is very well designed, introduces some fun new abilities and the defuse the bomb round is actually doable compared to the very hard rescue round of Infection, plus exchanging Malkovich for Campbell was a great choice, leaving only Paxton as the character no one wants to be! Incidental dialogue reveals more of the over arching plot while again the map is chock full of Easter eggs that lead up to yet another ending cut scene I am destined never to see.
Posted by Daniel Simmonds at 13:59