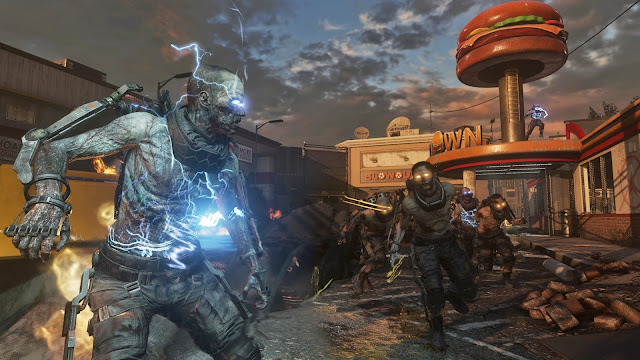 I want to start by stating I am in no ways an expert at Call of Duty: Advanced Warfare Exo Zombies mode, nor have I found any of the secrets or easter eggs hidden in Infection, after a few months of playing it I feel I have the experience to give a proper impression. Infection is the second Exo Zombies map and is included in the Ascendance DLC pack.

The introduction cinematic shows the four playable survivors of the zombie outbreak; Kahn (Bill Paxton), Lilith (Rose McGowan), Oz (John Malkovich), and Decker (Jon Bernthal) still fighting the undead at the Atlas facility when they are rescued by an Atlas gunship. The four are taken away by medical staff and transported to an Atlas camp in a nearby town. The four are unconscious and when they awake they find the camp evacuated and the whole town over run with the undead. 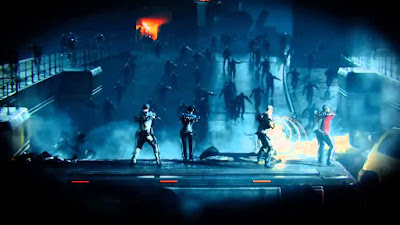 Out of the three maps I have played so far Infection is by far the weakest.The facility in Outbreak was well designed but here while there is mostly a circular route there are some parts that seem surplus, maybe I just haven't figured out their uses yet. Initially you start in a warehouse, not a bad little area to start in but you will soon be wanting to head out one of the two doors. One side leads to a petrol station, the other to the Atlas camp, both of these areas lead into sewers.

The sewer is where you will find the Exo Suit station which is always a useful thing to get but due to the small corridors it is actually pretty hard to actually make any use of the suit here. The decontamination room is also located in the sewers, in a tucked away area, I found this to be quite clever as during the infection round you are forced to make your way here where in Outbreak the decontamination unit was in the main area anyway. 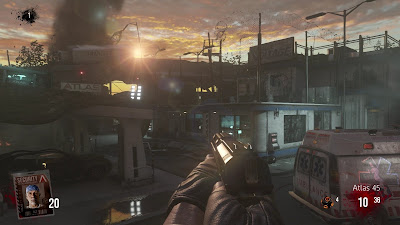 The last place is Burger Town which is a fast food restaurant, when you gain access to this area zombies start showing up dressed as Burger Town employees which is a nice touch but you can only access this area from one place, it doesn't lead to anywhere else and so always seemed to be a bit of a dead end to me.

With a different level comes different enemy types, the most noticable of the normal zombie types are ones covered in spikes, when you attack them they cause damage to anyone nearby due to the spikes being released. All the status effecting zombies make a reappearance (such as electrified zombies who knock out your Exo Suit abilities and ones which poison you). The best new one is a hulking great zombie that usually turns up around round ten, this giant beast has an electric attack, is fast, and is protected by a stupidly large SWAT shield, I have only ever actually encountered him twice, both times he swiftly obliterated me. 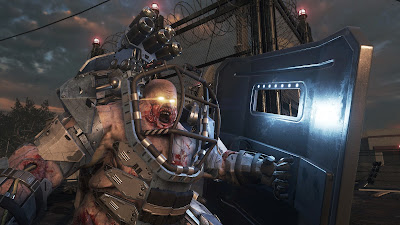 There are also a few different round types, the dog round now has dogs mingled in with zombies rather than just them on their own, the giant zombie as I just mentioned of course and a round in which a survivor spawns randomly in the level. If you safely escort the survivor back to the starting room and protect him long enough a copter will appear and rescue him which levels up whatever weapon you happen to be carrying, if you fail then you are not able to use any abilities or get any guns for a fair amount of time. The survivor round is actually pretty tough and I have only successfully rescued a survivor once.

Infection is not a bad map, it has certainly grown on me over time but compared to Outbreak and Carrier (which I will cover in a future post) it pales in comparison due to some weird level layout and a less cohesive design.
Posted by Daniel Simmonds at 09:12