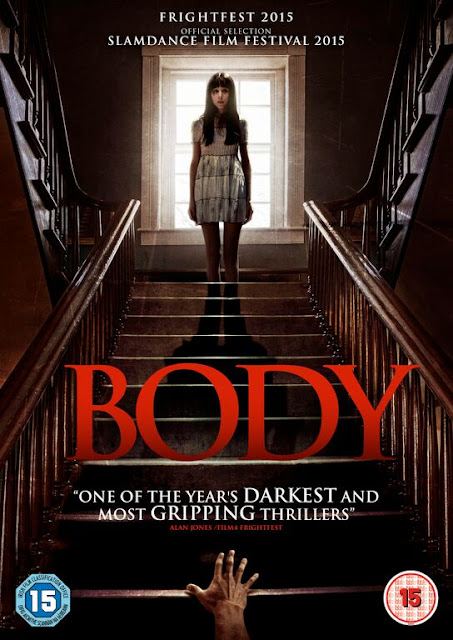 Well time is slipping away from me on this one. Body (written, produced, and directed by Dan Berk and Robert Olson) had it's UK premiere last Friday and today (31st August) it has been released on DVD and on digital. Going into the film I had read nothing at all about it and it actually turned out to be very different to what I expected.

It is the night before Christmas eve and three best friends; Holly (Helen Rogers), Cali (Alexandra Turshen) and Mel (Lauren Molina) are staying over at Mel's parents house. Cali suggests they head over to her rich uncles mansion as he is away on holiday. However it turns out she was lying and it is in fact a strangers home, to make matters worse a man shows up at the place and during a struggle he is accidentally seemingly killed. It is then suggested to make it look like he was killed in self defence so that the trio can avoid being arrested, and from this starting point the escalation continues... 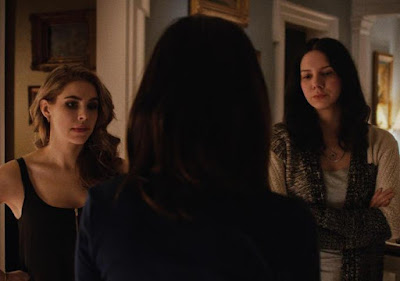 Having no idea of the type of horror this would be I imagined it would be torture porn or some such nasty, instead what I found was a slow burning drama about a group of friends put in an impossible situation. It actually reminded me a lot of the found footage film The Upper Footage that shared a similar storyline, thankfully this is a lot better than that and this is due to some fantastic acting. There are not a lot of characters in Body but all do great performances. The three girls in particular really sell their friendship, the first twenty minutes in which everything seems fine really demonstrates how close the group is, the whole cast fit their roles near perfectly. It is true that by the end some characters seem to be behaving slightly unrealistically but no performance is ever over the top, all still believable.

The first part really plays with the audiences expectations, from the initial transcript of a panicked call to the emergency services you are given the knowledge that something terrible is going to happen. A creepy old man by a broken down truck provides an early red herring on the films direction, while voyeristic shots filmed from the shadows create a sense of unease and paranoia with suggestions of horror to come. Of course this is far more a thriller than a horror per se but it is horror in a real sense, a sense of slow inescapable doom. There is not a lot of violence or action here but it does have it's moments, the most disturbing moments come from the cover up. The girls want to make it look like the man they killed had tried to rape one of them, the way they go about this deception is uncomfortable, one scene in particular shall stick in my mind for a good while, grim stuff indeed. As the plot progresses there are several different imaginary sequences narrated by one of the cast for the different stories they are coming up with to explain what has happened, I enjoyed these parts as while it made it more film like it also provided a strange sense of escapism that the characters themselves were unable to do.

With quite a few twists and turns I found myself surprised on more than one occasion, I was not sure how it could all be tied up fairly neatly but when the end came it was satisfactory even if a lot of the final third was perhaps the weakest of the whole film when characters started acting out of sorts. The directing is fantastic throughout, the score complimented Body,  there are some great classic shots here, one of Holly walking down a corridor steeped in shadows in particular I was very impressed with. 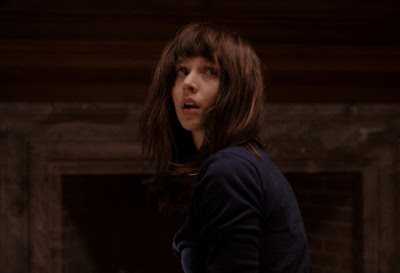 Body is well made and felt fresh deviating so much from what I expected. Some solid acting and a good script makes for a decent slow burning thriller that at 115 minutes does not outstay it's welcome at all.

Check out this clip from the film from when the girls first realise what they have done if you so desire...