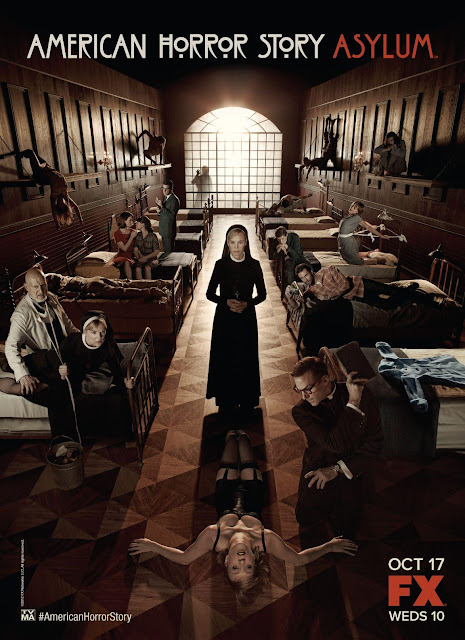 Right off the bat I need to say I really don't know how this review is going to pan out, It has taken me the best part of a year to watch the whole second season of horror show American Horror Story and so my memory of much of it will be lost to the mists of time, Still I will try my best as it is horror (the clues in the title) and so deserves a place on this blog. It has been said that this second season, titled Asylum, is the very best the show has given.

Each season as far as I can tell is a stand alone story with no links to any other season, so the first one set in a haunted house in modern day has no relationship to Asylum which for the most part takes place in the 1960's in Briarcliff Manor; a mental institution owned by the Catholic church. There are many interweaving stories going on, one of which features reporter Lana Winters (Saran Paulson) who is discovered when sneaking into the mental home to do an expose on the appalling conditions there and is held against her will by the sadistic manager Sister Jude (Jessica Lange - American Horror Story: Murder House). Others include Kit Walker (Evan Peters - American Horror Story: Murder House) who is an inmate at the asylum after being accused of being 'Bloody Face' a notorious serial killer, a possible ex Nazi in the form of Dr Arden who is performing inhumane experiments on the patients, and even a supernatural storyline with one of the sisters apparently becoming possessed by a demon. 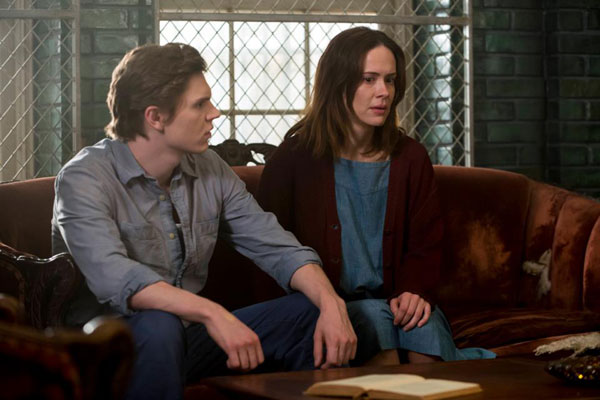 The plots all interweave and many times things that seem unrelated become so. For season two the horror is a lot more real than the ghosts of season one. With serial killers, corrupt staff, and sins of the past this goes down a different track. That is not to say it is all more human horror as along with the demonic possession storyline there is also one involving apparent alien abductions. That last plot in particular ran the risk of turning into farce due to it's unbelievable nature, but the show just about manages to keep things grounded. Previously around half the show was set in modern day and half was set in the past, here roughly 90% takes place in the past. There are brief snippets set in present day, mostly revolving around a killer who is murdering people who break into the abandoned Briarcliff Manor. These modern day parts help to create questions in the minds of the viewer due to things characters say, and visual clues as to the fate of the institution. There is a lot of misdirection here which is very clever and makes you think things are going to play out differently to how they actually do.

The show is split into thirteen episodes and there does not seem to be any filler at all, there is even a Christmas episode neatly inserted, again similar to series one this isn't actually a scary show, but that is not to take away from the sheer quality. Briarcliff is a dank and dark place but thanks to the focus on drama rather than horror you settle in nicely. Some nice throwaway sequences (such as a dance number!) help to provide variety, while towards the end time starts zooming forward years at a time to show the long term changes to the cast which was a nice way to end the show (a great final episode). There is a large amount of great acting here, I was pleased to see at least six returning actors from the original series, here playing different roles, a few bit characters from that are now in leading roles, while a couple of the main characters are now secondary ones. It was a delight to pick out these actors and gave a sense of continuity despite being an unrelated story. 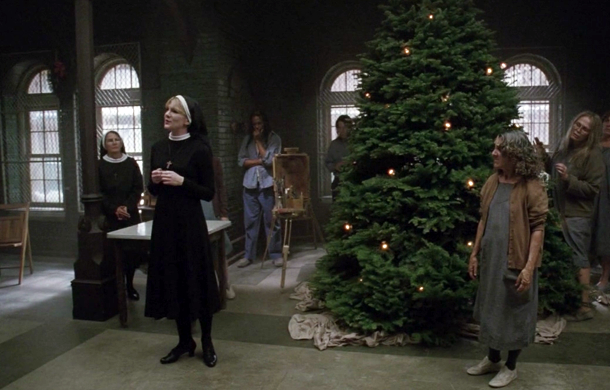 The special effects and direction is again quite strong, when there is violence it is usually quite bloody with an initial statement being someone losing an arm within the first part of the very first episode. There are some sick storylines here and a fair number of twists, some of which really blew me away, the whole 'Bloody Face' storyline in particular serving up some real thrills.

Another quality season of this fantastic show and while I think I did prefer the first one, American Horror Story: Asylum is still a damn good show and well worth a watch if your after some quality horror that doesn't feature the walking dead.

Posted by Daniel Simmonds at 05:41