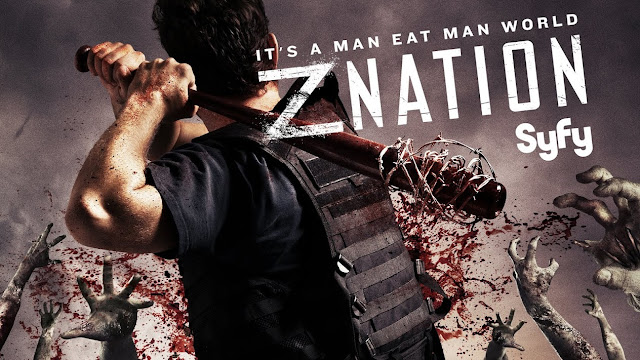 Being a zombie based TV series comparisons between Z Nation and The Walking Dead were always going to be unavoidable. I have tried to base this review of Z Nation on its own merits, as with a far lower budget this was never going to be able to stand up, Thankfully they know this would be the case so have gone out of their way to make the show as different as possible.

Z Nation takes place around three years after zombie Armageddon has swept the globe. A group of survivors get tasked with an important mission; to escort a convict named Murphy across zombie infested America, from New York all the way to a secret government facility in California due to the man being immune to the undead disease. The group are helped on their journey by 'Agent Z'; a intelligence officer operating out of a government base deep in Alaska, along the way they encounter all sorts of crazy. 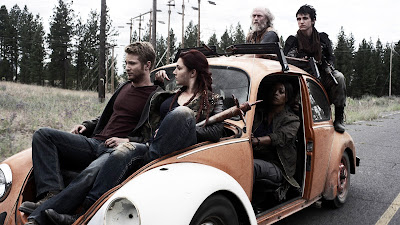 Things did not start well at all for the show, the first few episodes were excruciatingly boring to watch, the low budget was super apparent, the characters an unlikeable bunch and the plot lines dull and uninspired. Yet an episode that starts with the Liberty Bell bowling its way through throngs of zombies fittingly rings in a change, the episodes get more and more stupid and insane and the hated characters mostly develop into people you actually root for and care about. By the spectacular finale 13 episodes later I was completely hooked and dying to see Season 2.

The way Z Nation sets itself apart is by putting no end of insanity into its ghoul ravaged USA, by the end of the season the survivors have encountered a zombie vomiting tornado, stoned, nuclear and baby zombies, crashed astronauts, a vandalised Mount Rushmore and even a 'zomnami'. The group come up against cannibals, zombie worshipping cults, a travelling zombie fair, power plants going into nuclear meltdown and encountered a whole range of zombie animals including dogs, monkeys, and even a damn bear! 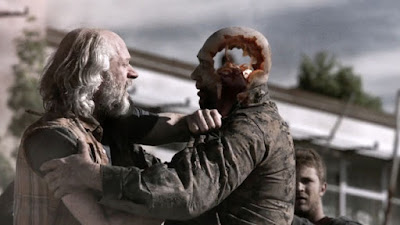 The characters are not a bad bunch either. Episode one tricks you by setting up someone as the main character only for him to be needlessly killed later on the same episode by a baby, the actual main characters are Roberta and Charles; two members of the national guard, Addy and Mack; a young couple and Cassandra who are all ok characters, Roberta is well played and is actually a pretty decent one but the others are pretty bland with back stories invented to make them seem more fleshed out but only high light how dull they are. The great characters though are Doc; an old dodgy guy who is kind of the groups medic, 10K who is so named as he is on a mission to kill 10,000 zombies, Citizen Z (played wonderfully by D.J Qualls) who provides various sub plots of increasing surreality, and by far the best; the convict Murphy.

Murphy starts off as petty unbearable, he is terrified of the undead after being left to be chewed on by them and so acts cowardly and aggressively. Yet by the seasons end his character arc had made him into by far my favourite character. The biggest and best thing Z Nation does is Murphy. He gets almost super powers as the season goes on. Zombies ignore him to begin with but eventually he is able to not only control zombies but also to control anyone he has bitten or scratched. With these new powers come lots of pretty awesome scenes. 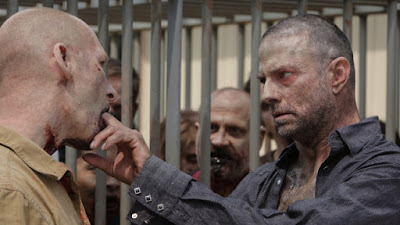 Supporting characters are a zany and varied lot but none really stick out, you can usually assume by episodes end all but the main cast will either have left or been killed off. Still one episode features the legend Bill Moseley playing a deranged army Captain which was great to see.

To begin with I did not think the zombie effects were that good, yet by the seasons end the effects seemed to have picked up quite considerably, plus there are many many times when hordes of the undead appear, it is never just the odd few. There are really some quite violent deaths, funnily enough off the top of my head I can't recall any but I know there were several times I winced at the violence inflicted on the poor undead. The show also features a mixture of running and shambling zombies, the logic of the universe stating that the recently turned have more access to their basic motor functions while the long dead have slowed down to the traditional type. 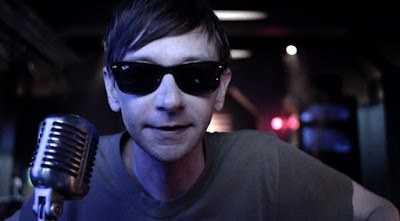 The overall plot of transporting Murphy across America leads to the opportunity to go to many different locations, each episode sees the group in a different part of the states, The overall story really takes a back seat as it is more a 'story of the week' kind of show with most stories getting neatly wrapped up in 45 minutes and they are mostly full of incidental humour, such as a man who got turned while on the toilet so is stumbling around with his trousers by his ankles, Meanwhile on the action front there is some quite cool use of special effects where the camera follows the trajectory of a bullet fired from a gun, or some awesome slow down during a sword attack. It also experiments by having episodes devoted to specific characters running concurrently much like The Walking Dead. Unfortunately one of the episodes is dedicated to just Addy and Mack who are dull as dishwater, even here inventiveness is created as the majority of this particular one takes the form of a protracted Groundhog Day style dream sequence.

Z Nation by setting the bar so low initially led to my expectations constantly being exceeded, soldier on through the initial three episodes and you will be in for a nice surprise. Sure the budget is low, sometimes some of the ideas are not so original, but often the sheer scope and the character development wins through.

Posted by Daniel Simmonds at 05:57