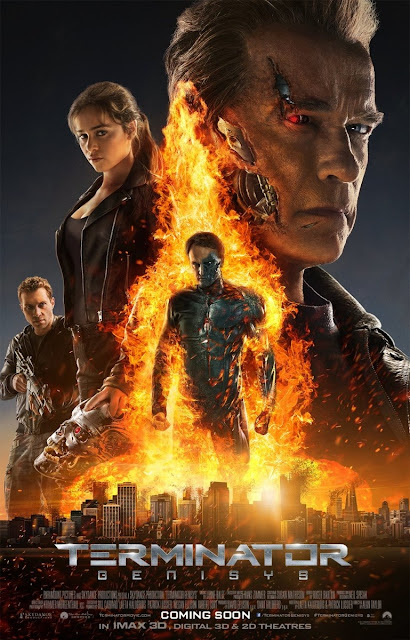 I had no plans to review the new Terminator film for the sci-fi series can never really be said to contain too much horror, yet looking back I realised I had in fact reviewed Terminator: Salvation and so I grudgingly decided this would come to review too. Minor spoilers to follow, but then if you have seen the trailer these have already been ruined.

Genisys starts off in the future and shows how Kyle Reese (Jai Courtney) got to time travel back in time to rescue Sarah Connor (Emilia Clarke), so far so normal. The twists come fast and thick though as finding himself in 1984 it is not a scared waitress he finds but a battle hardened head strong woman. Time travel has again mixed up the events that lead to Judgement Day, Sarah having been visited by a friendly Terminator (Arnold Schwarzenegger) when she was 9 years old and so protected by him her whole life. To mix things up more the more deadly model; the T1000 is also in 1984 and so much chaos ensures. Eventually the friendly trio end up in 2017 which is the new date for Judgement Day (again due to time travel shannegins) where their efforts to delay the end of the world are made a lot harder by John Connor (Jason Clarke) of all people who is now working for Skynet (rebranded as Genisys here). 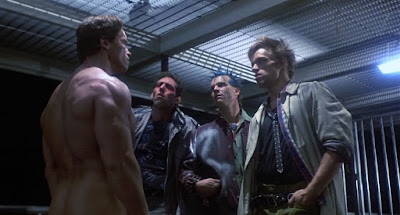 Now this is not horror, this is pure sci-fi action for the whole of it's two hour run time. The initial introduction complete with voice over was fantastic for setting up the vibe of the Terminator world, while the first half hour of this film is its very best with unrelenting action. The parts set in the future, and the parts set in 1984 were my favourite by far as the present day sections while entertaining enough lose some of the retro vibes associated with the earlier films. There is a lot of fan service here, crazy amounts in fact with the first two films in particular referenced a heck of a lot. Sarah Connor wears her iconic black vest top, all the famous one liners are repeated here (obviously 'I'll be back' and 'come with me if you want to live') but there are spins put on them that are pure fun for the viewer.

Schwarzenegger is getting on in age now but thankfully this older looking Terminator is explained away in the plot which I appreciated, meanwhile flashbacks to the 1970's show a youthful looking Terminator that looks identical to the first film, while the 1984 version also has some cool special effects to make him look younger. The T1000 on the other hand, and by association the John Connor robot have some fantastic looking special effects that just could not have been possible in Terminator 2: Judgement Day, this makes for some fantastic action sequences. Emilia Clarke looks bizarrely similar to Linda Hamiltons while Courtney as Reese is not badly cast either. Schwarzenegger's Terminator is even more down the friendly good guy route with it even being implied he has actual emotions towards Sarah, and many of the jokes come from him. 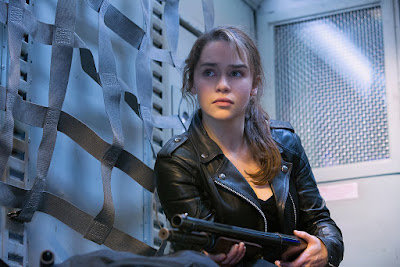 It is not all good though, I found John Connor as the human to be a bit strange looking, I guess him being the fourth different actor in a row playing John has led to this disconnect from the character. When he appears later as the main bad guy I found him to not be interesting at all, his motivations are flat and there seems to be nothing left of the human John even though it is shown that the robot assimilated his body and so I had hoped there would be some human side to him, alas he just comes across as a bland bad guy, the amount he talks really takes away from his presence as someone to be feared. He has some good scenes such as one on the golden gate bridge, and an enjoyable finale but is the biggest mis step to be found in Genisys. It was kind of jarring to see the Terminator and T1000 models so easily dispatched here, when you have two films of them being bad-ass the ease of which they are removed from play while entertaining felt a bit of a cop out.

With lots of time travel, some great chase sequences and plenty of fights this is a spectacle to watch, it is all action though, and not even strong in violence, as such it is just not a patch on the first two films even if it far excels from Terminator 3 and Salvation. The main bad guy is uninspiring, the time travel plot while decent enough doesn't really do enough and I was left wishing it had just been more visceral. Still I can't fault the special effects and I did leave the cinema feeling thoroughly entertained.