Back at the start of February I did a small blog post about upcoming post apocalyptic show Swords of Insurgency (directed and produced by Michael Neal), now I have had the pleasure of watching the first episode and I have to say it really was not bad, in fact the premise is actually really interesting.

Swords of Insurgency takes place 30 years after the end of civilisation, with the electrical grid long since destroyed and guns in extremely short supply the world has entered a new dark age with feuding warlords battling for control over the land. The show takes place in the territory of Taneg; a cruel lord who rules along with his psychotic son from his prison compound where political prisoners are kept. One such prisoner is Abigail, and she has been waiting for an opportunity to escape the hellish prison and meet up with the local insurgency...

The first episode was around twenty minutes long and had very little dialogue to speak of, in fact Abi (Rebecca Hausman) barely even speaks, her acting all told through her desperate actions that reveal her to be a force to be reckoned with. The idea of a new dark age makes for quite a unique look to the show, the warlord Taneg for example wears combat fatigues, his guards all wear boiler suits and balaclavas that all look so normal. A post apocalyptic show were people actually wear sensible clothes; how novel! 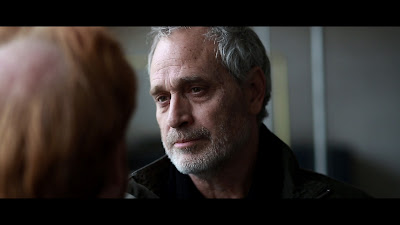 I noted in the trailer that it seemed to be well shot and I was pleased to see that my opinion was backed up by some beautiful scenes here, one in which an escaping prisoner runs down a water logged tunnel while David Firth style dreamlike music plays was so well done. Locations also were well chosen, the prison compound is a great place that feels authentic, while a later shot of a ruined apartment block gives a sense of the devastation that has wracked the world.

The fight sequences are short and snappy, though one involving a samurai sword was let down for me a bit by CGI blood spurts which seemed a bit too obvious they were not real. It was hard to judge the vocal acting, the bad guys maybe seemed a bit too hammy and one dimensional though it will be interesting to see if they, as well as the other characters get a chance to be fleshed out and made to seem more real.

Overall I was impressed with the quality of Swords of Insurgency, the directing in particular was top notch, with a Kickstarter campaign to be done to raise capital for further episodes I hope to get to see more of this web series, if you are able then I would certainly say to check it out.

Posted by Daniel Simmonds at 04:53