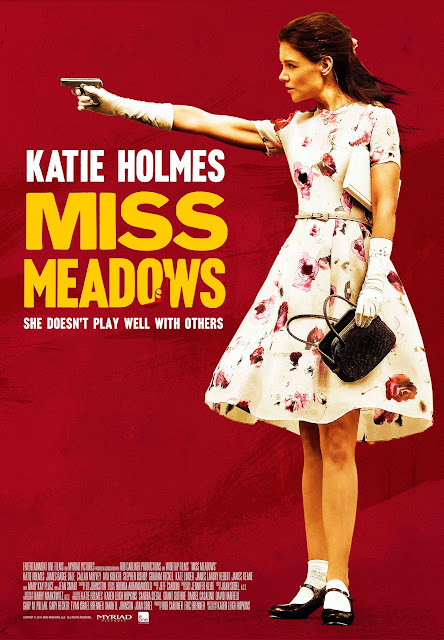 Sometimes when I get offered films to review I don't do my homework and end up with something that shouldn't really be on this blog, so when Miss Meadows started and seemed to be a quirky comedy (albeit a black one) alarm bells started to ring. Thankfully over the hour and a half run time the tone changes to something a lot more dark and thoughtful.

Katie Holmes stars as Miss Meadows; an oddball substitute teacher who also happens to be a serial killer in her spare time, going after people who she sees as deserving of death. The town sheriff (James Badge Dale) takes a romantic interest in her and they start dating, unaware that a series of vigilante killings taking place that he is investigating is actually down to her. As she starts to crack under the pressure of her secret life can she still manage to come out on top? 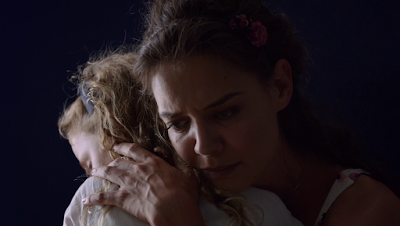 While the first scene of the movie sets up the idea that Miss Meadows is a remorseless killer this idea is then not touched upon for a further half an hour, instead it becomes like a romantic comedy with the blossoming relationship between her and the sheriff. I was not fond of this part of the film, especially with the Holmes's character. She dresses in kooky outfits, has a bizarre manner of talking and dances when there is no music playing, like she is going out of her way to be weird. I found this character to be irritating at first but thankfully she really gets some development down the line. It soon becomes apparent that she is not just an odd ball but that she is actually legitimately mentally unstable.

As the film progresses we start to see cracks in her facade, this isn't all twee and bright but instead as more of her character is revealed you see damaged goods who has a strict black and white view of the world. This is revealed not only in her actions but also in the people around her. A conversation about justice with her sheriff boyfriend, a recently released criminal who later becomes almost the films antagonist keeps telling her she is just like him, and the way the two are portrayed this almost seems correct with this bad person seeming like a physical manifestation of her conscience. 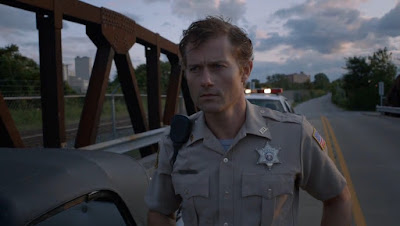 Enough about the main character, what about the film itself? Miss Meadows has quite a sunny vibe to it, but one with darkness rippling underneath. The world the film takes place in seems almost too simple with bad characters just bad, no redeeming features are provided for them, while the good characters are also just made to seem one sided also. Whether this is purposely done to demonstrate the vigilante's view of the world I do not know, I hope that was the intention as otherwise you get left with a series of one dimensional people. The film shares many similarities with the excellent show Dexter (well apart from the terrible final episode!) featuring as it does someone who kills believing that what they are doing is right while trying to keep a normal life. Also in common with that show is the terrible police work done as if there had been any proper work done at all Holmes's character would have been locked up at around the five minute mark.

The supporting characters are for the most part the children in Miss Meadows class and they are actually not bad for child actors, they don't over act as children often do, and they don't have that creepy adult way of talking that often plagues them. Dale as the sheriff does as good a job as he can but I don't feel the script was the best for him, some of his actions are just bizarre with his motivations not justifying reality. Talking of being unrealistic I found the sickly saccharine ending to be ill fitting, things are just tied up too easily . 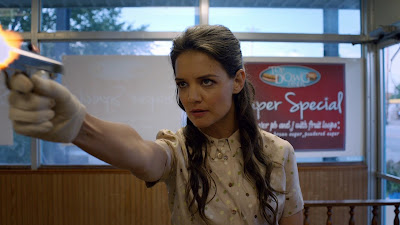 Surprisingly Homes steals this film, she puts in a fantastic performance, Miss Meadows was very nearly a fantastic film, it has some decent twists and the directing isn't bad, but due to a few little niggles I had it is instead just a good film, worth a watch but not something I would go out of my way to recommend. Miss Meadows is due to be released on DVD and Digital on 27th July.

Posted by Daniel Simmonds at 08:13