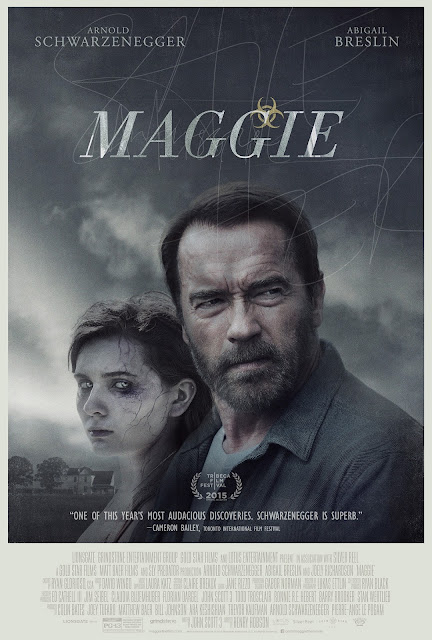 Despite not showing at my local cinema I made the effort to see Maggie by travelling to the next town over, after all how often do you get to see zombies on the big screen? I kinda felt like I knew the vibe going in so wasn't expecting a balls to the wall action flick.

Maggie takes place in a world that has been swept with a deadly zombie apocalypse, the world is coping but only just with strict quarantine rules in effect. Wade Vogel (Arnold Schwarzenegger) has been searching for his daughter Maggie (Abigail Breslin who was also in Zombieland) ever since she ran away from home, he finally finds her in quarantine having become infected by a zombie attack. A friend high up in the medical profession has pulled some strings so that rather than live out her remaining weeks at a special centre she is able to return to Wade's farmhouse, but when the time comes will Wade be able to do the right thing for his beloved daughter? 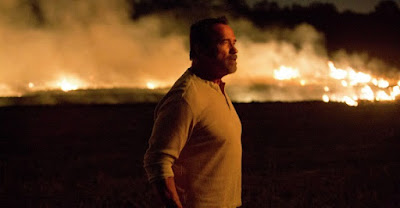 I was expecting a slow burn of a film and this didn't disappoint with it being almost excruciatingly slow in places. I was expecting something along the lines of The Road and the mournful, sad tone did feel similar but this is far more drama than even that. This is the first zombie film which really seems to show the effects on the family and friends of the infected. Having lost his first wife Wade's daughter is a constant reminder of her, as such she is pretty much the most precious thing to him, more precious and important than his second wife and their young children. I was not expecting Arnie to be able to do a straight up serious film but with the role he has he does a decent enough job, and while there are no scenes of real emotional weight behind them it is obvious through the character of Wade and Maggie what a close bond they have, he even gets to shed a tear in a couple of scenes. His character doesn't really have much to him in the end though, aside from the loving father you don't really get to see what kind of a man he is.

Maggie has much more to her character, the struggle of knowing she is not only going to die, but to turn into a flesh hungry monster is etched onto her face, often sad and with society shunning her to a degree you get to experience what she is going through on a week by week basis; PTSD nightmares of the moment she got bitten, her revulsion at her decaying skin, and her break downs all link up to create someone who feels believable in their role. Sometimes this has more of a feeling of a terminal illness victim knowing their time is coming up rather than a zombie victim, with a gestation period of six to eight weeks it is all about how they choose to spend their days. 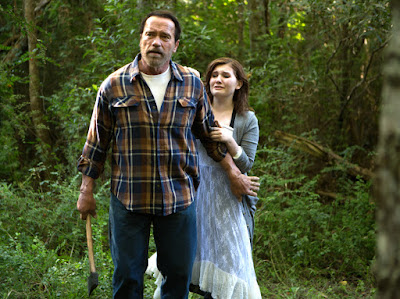 There are hardly any undead shown in the film but the effects looked pretty decent, a zombie child in particular stood out as being the best (worst I guess) looking zombie child I have seen in film, an unsettling moment. Thankfully there are not too many scenes involving kids as Wade's young son has that creepy adult way of talking that so many directors think is realistic, least he only really gets one scene before him and his sister are carted off to an aunts house never to be seen again. Supporting actors on the adult side are all pretty decent, Wade's friends in particular are a strong cast, while his wife has a bit of an evil step mum vibe to her but her concern is hardly unwarranted. The teen side of things most the characters are forgettable aside from Maggie's best friend who has one pretty moving scene.

Muted grey skies, sun rises that never quite come and the depressed dying world combine to make a film that is pretty sad at times with not much relief or hope. The whole film I was waiting for the inevitable yet when it came it was unexpected in its outcome, I left the cinema close to tears but not quite there. A sad film then but one which maybe was just too slow in places, good to see Arnie in a more serious role for once, and in a zombie film no less.

Posted by Daniel Simmonds at 10:10