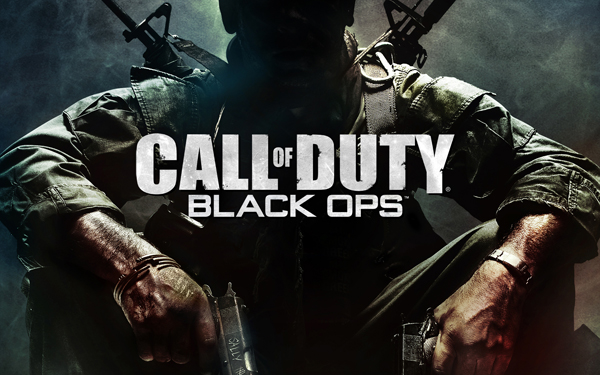 Each time the expensive Call of Duty: Black Ops map packs go on sale I buy one, even at a reduced price they are nearly £9 each, and that becomes even more expensive when you take into account of the five maps you get in each of the packs it is only the one zombie one I want, only the one zombie one I am going to play with. Anyway recently the packs went on sale once again and I decided to buy the remaining two that I did not yet own.

First off is Shangri La which is set in the ruins of an ancient shrine in the middle of a jungle, from the loading screen it looks like this is a place out of time. The map is quite large and loops around on itself. Exterior parts include spike traps and pressure pad traps, a large rope bridge and a small lake. Aside from a few tunnels the other main part of the map is some mines that run under the exterior level. These mines include a generator room which provides power to the machines of the level and some flooded areas. The most fun part of this map is all the short cuts you can use, there is a cool water slide that takes you down through the underground as well as an equally as fun mine cart that does the same. In the mines there are a few water sprouts which fling you back up on to the surface if you wait on them for a few seconds. 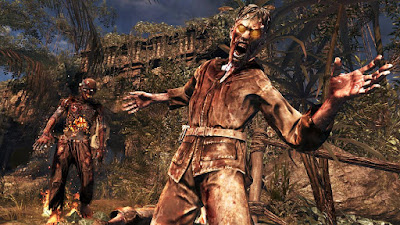 The zombies in Shangri La are an assortment of emaciated male and female zombies, these look far more skinny than the undead in other maps but are just as powerful. There seems to be two types of special infected, the first runs at you and if it attacks you it manages to blind you for a few seconds which is terrible if you happen to be surrounded! The second type is a flaming zombie that rises up out of the ground, this one not only explodes if you shoot it too much, but also it can self destruct to instantly kill a player. Then there are the monkeys which are really quite cheeky. These simians are not zombies and you don't get any points for killing them but if a power up appears these damn creatures will attempt to steal the power up and run off, should you get it before them they will attempt to attack you with a swipe of their claws, thankfully it only takes one hit to kill these!

The second map is Ascension that takes place at a Soviet launch site. This is another large level mostly made up of corridors in the interiors and semi open spaces outside. The puzzle box always spawns in the same place (the generator room). Bizarrely the level is in black and white until the power switch is thrown which can make it hard to see the undead. Dotted all over the level are rocket stations which you can use to summon a rocket platform which gives you a useful escape route as it will fly up into the air and take you either to the starting room or if another player has summoned it it will take you to their location, these are a lot of fun to use. 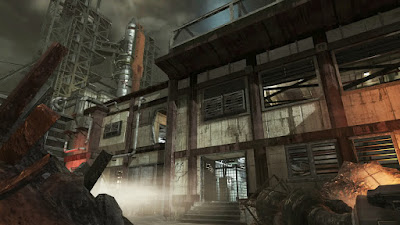 The zombies are made up of scientists and soldiers but every now and again you get a special round were you have to fight off a bunch of monkeys wearing space suits who explode when shot! The level has a few unique weapons including a sickle that is a powerful melee weapon, a black hole bomb that sucks zombies into it, and a Russian doll that is like a cluster bomb.

Both these levels were a lot of fun so despite the price I am glad I got them. I like that the dialogue of the characters seems more self aware than usual with characters complaining about Treyarch (the maker of Black Ops) in various different ways quite a lot. I now have all ten of the zombie maps, I really wish a stand alone zombie game would be released with all the maps from all the Call of Duty zombie mode included.
Posted by Daniel Simmonds at 10:30