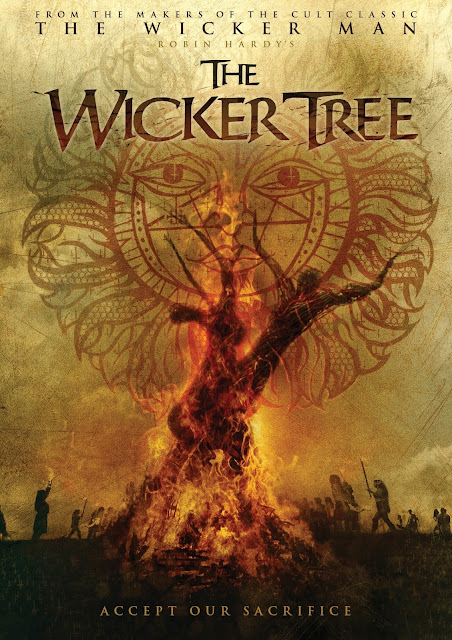 The Wicker Man is a stone cold classic British horror film, that just cannot be denied, it is surreal, and clever and features not only one of legend Christopher Lee's greatest roles as Lord Summerisle but has one of the very best twist endings in a horror with an unforgettable climax. The Wicker Tree is directed by Robin Hardy who was also the directer of The Wicker Man so I hoped this loose sequel would also be good.

A young Texas couple; cowboy Steve Thomson (Henry Garrett), and his famous gospel singer fiancee Beth Boothby (Brittania Nicol) head to Scotland in order to try and convert the people there to the lords way for their church. With things not going well in the city, businessman Sir Lachlan Morrison (Graham McTavish) invites the couple to go to the countryside to his remote village where he assures them the villagers will be more willing to listen. As anyone who has seen the original will guess Morrison has a more sinister agenda in mind... 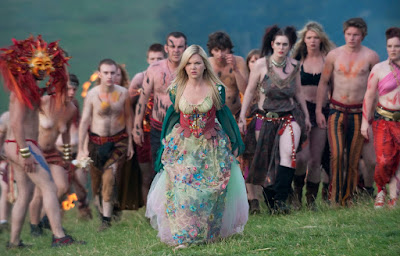 The Wicker Tree is not a good film, I had to get that out the way first, I was sorry to come to this conclusion as at first it really was quite enjoyable, but the film peaked too soon with it losing steam in it's final third and managing to be both tedious and predictable. I had been planning to watch this film anyway but with Christopher Lee's sad passing last week I bumped it up due to him having a guest appearance here. Originally he was going to play the main lead but an injury led to him dropping out so instead he appears in a flashback briefly, with it insinuated that he is the same character from The Wicker Man.

Obviously this is set in modern day rather than the 1970's and while I think it is a sequel rather than a reboot much of what happens is kind of similar. There are lots and lots of songs sang throughout, not as weird here as with Thomson being a gospel singer it makes sense she would sing, also like the original there is plenty of nudity there to act as temptation for the innocent couple, while the village folk seem all too ready to burst into creepy Scottish songs at a moments notice. There is not any real surprises as it is pretty obvious what is going to happen, I said to myself I would have been disappointed if it had ended any way other than what I expected but it met my expectations and still vastly underwhelmed me. 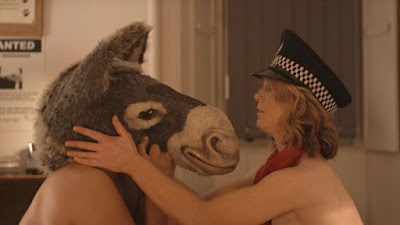 The problems started with the choice of actors and the characters they play. McTavish is a poor mans Lord Summerisle, he had giant shoes to fill and while he gives his all to the role his character just is not a patch on Lee's performance. On the other side of the morality side the Texan couple are such wet blankets and dull that I could not care less what happened to them. Thomson soon reveals his religious beliefs to be weak, his character is quite dense and conforming to the stereotype of the dumb brash cowboy, meanwhile the character of Boothby just has nothing to her, Hardy's attempt at making her into a head strong heroine fail as she just has nothing to her character at all.

I really wanted to like The Wicker Tree, I almost did, it steadily gets better and better up to the sixty minute mark, the couples dealing with the bizarre villagers and the expectation of a cruel twist kept me kind of glued. At the hour mark and with Lee's minute long appearance passed (a great scene no less) the slow burn of the final third up to the nonsensical ending, and the failure to create any sort of tension drained my enthusiasm. I found myself clock watching, even giant nods to the first film could not get me interested, nothing surprised, nothing made me feel any kind of emotion and I was left wondering just what was the point of it all. 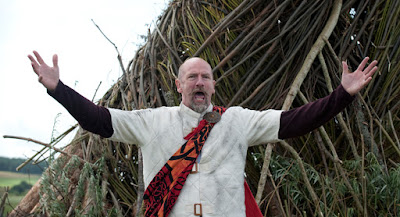 There are certainly worse films out there and this does have it's moments of interest but there is none of the atmosphere and that last third really did just ruin it all. I'm kinda glad Lee wasn't able to play the lead role, he dodged a bullet indeed.