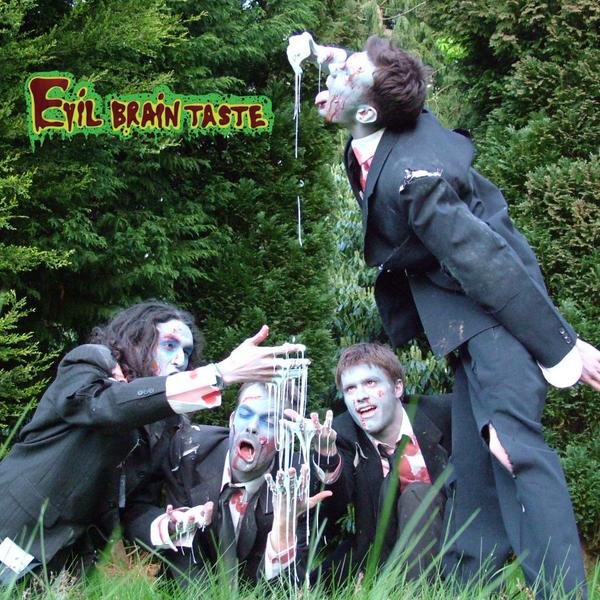 There's been a hole in my life ever since the awesome zombie death metal band Send More Paramedics died (may their rotted corpses R.I.P) however I have now discovered a seemingly newly risen UK zombie death metal group in the form of Evil Brain Taste who sent me an email about a music video for their debut album.

The band members (Bone, Stench, Chot, and Legg) play while dressed as zombies and all their songs seem to be about zombies or eating brains. The video for The Taste of Evil Brains starts with two hipsters being shown a dilapidated house by an estate agent, with the sight of zombies in the distance he hurries the couple inside. The duo keep encountering the undead in the property until they get knocked out and awake tied to chairs where Evil Brain Taste play in front of them.

With lyrics such as 'flesh is tasty but all we want is brains can't stop the hunger running through my veins' they certainly are not trying to impart a serious message but instead it is just plain fun to listen to. They have recently released an album on iTunes and other music download services titled Dead Dead Bad which as it was cheap (£3.99 in the UK) I just had to purchase, listening to it as I write this post and it is quite enjoyable if your into the zombie metal genre. Check out the video for The Taste of Evil Brains below and see if it's your cup of brains...

Posted by Daniel Simmonds at 09:28