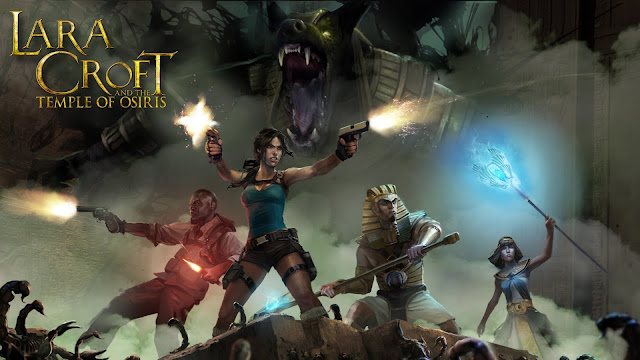 When I heard there was to be a sequel to the 2010 isometric action game Lara Croft and the Guardian of Light I was very excited, I had so much fun with that game; a near perfect co-op experience. This time around the game can be played with up to four players and is on current gen consoles.

Lara and her rival Carter Bell are both on a mission to find the ancient relic known as the Staff of Osiris, they have tracked it down to an Egyptian pyramid but upon claiming it the God Set appears and marks the duo for death, for the staff had kept imprisoned the Gods Horus and Isis who were the last ones to fight against evil Set. They tell Lara and Carter that if they help them gather up the body parts of their father Osiris then they will be able to remove the curse that threatens them. 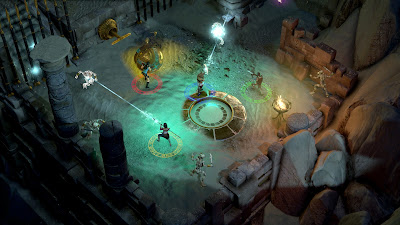 Now maybe I am misremembering the first game but the dungeons of this one seem a lot smaller and simpler than before. I believe the first had a straight progression from start to end where here you get a large hub area which gives you some slight control in what order you battle the levels. Paradoxically despite a larger amount of levels (however reduced in size they may be) the variation is instead a lot less than before, for the most part you are just working your way through pretty much identical looking dungeons.

I feel like designing the game for four players has dumbed down the complexity of the puzzles, there were a few that really stumped me and my co-op partner for a while but the majority were really quite simple. Despite now featuring four characters there are only two different types of abilities spread over the group. Lara and Carter have pretty much the same move set as Lara in Guardian of Light. She has her twin pistols, she has a grappling hook that can be used to create a tight rope, or to climb up sheer walls, and she has the ability to light torches. Isis and Horus have a slightly different and not as good move set than Totec had (the other character in Guardian of Light). Both are able to create a force field that acts much like Totec's shield, and can use their staff to move certain glowing objects. Rather than have spears they are armed with lasers that are required in a number of puzzles where you have to bounce the laser beams off of mirrors. The problem is that this laser is far less fun than Totec's spears as that involved the other player (they could use thrown spears as makeshift platforms) while shooting a laser doesn't involve the other players at all. 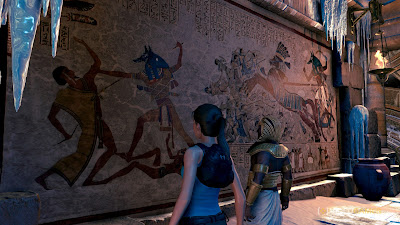 There seems to be a lot more action this time around, regularly you will find the screen flooded with large scarabs, skeletons and crocodile men, and with a variety of weapons unlocked as you progress these can be fun to defeat even if it is entirely possible to loose your character in the heat of battle. The bosses are fun enough to fight, most of them being Egyptian Gods such as the huge crocodile beast Sobek who also appears to chase the group in several of the games fun chase sequences.

Thankfully despite all this retreading of old ground Temple of Osiris is still a lot of fun to play in co-op, there are still lots of ways to grief your friends such as using your force field as Isis or Horus to push them off a cliff, stepping off essential switches at the worst moments, and laying down bombs to blow them into the air as they pass by, all fun despite the many real world punches I got for griefing! Another way to grief is to greedily steal away all the gems dotted around the levels. Gems are used to unlock the hundreds of treasure chests in the game but unfortunately the usual reward for opening a chest is some sort of lame power up you can equip, none of these seemed worth the effort of having so I soon tired of even bothering to open up any chests. 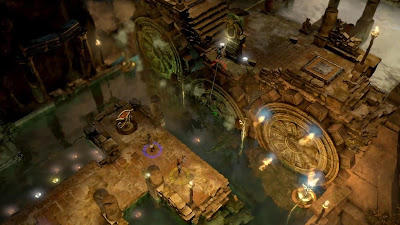 Being a downloadable next generation game (well current gen now) it does look prettier than before with some nice particle effects used and a crisp clear look to the game, but this can't hide what is really more of the same, there is no real innovation here, and instead the smaller and more thematically similar levels show up how much better Guardian of Light was designed. The plot as before is not memorable at all though that was no surprise, and again I heavily suspect single player would be quite bland. Still as a fun co-op game it cannot be faulted, I had a heck of a lot of fun playing it regardless of it's many issues.