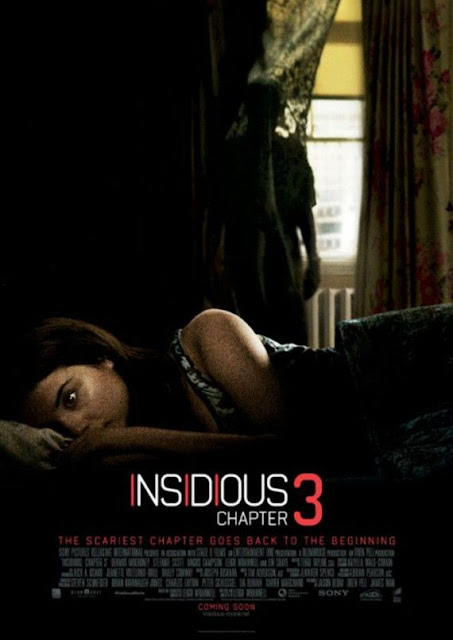 The first Insidious film really impressed me, at the time it felt like a breath of fresh air, yet the sequel; Insidious: Chapter 2 was not so good. Bearing that in mind I lowered my expectations for the third film which is actually a prequel and follows psychic medium Elise.

Elise (Lin Shaye) is visited by a young girl; Quinn Brenner who wishes to contact her mother who died a few years previously. Elise is unable to help her but instead gives her a warning about trying to contact the dead as anyone could be listening. After a car accident caused by an apparition Quinn finds herself bed bound back at her apartment flat. Soon strange goings on start to happen with a shadowy figure who seems to be haunting the girl and wishing her harm. Meanwhile Elise has had a vision of Quinn in trouble but she has her own personal demons to battle as due to an incident in her past she has stopped using her powers. 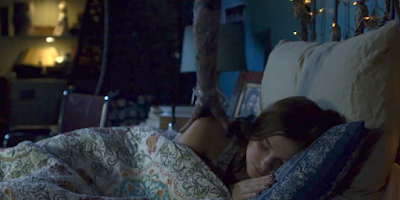 I enjoyed Insidious: Chapter 3 but it met my expectations in the sense that it really was more of the same. There is far too much of a reliance on jump scares and while a few times I nearly fell out of my seat in shock it is a lazy way to generate scares, thankfully there are some sequences later on in the film that actually create fear through well filmed pieces and not by flinging monsters at the screen. The being haunting Quinn is a scarred figure wearing a breathing mask and is creepy enough when you only get glimpses of the demon, though later on in the film you get to see more and more of the antagonist and it does loose some of its impact through over exposure. With Quinn having both her legs in casts she is powerless to escape the attention of this evil entity, many scenes take place in her bedroom, these horror scenes are quite effective as the victim is literally unable to do anything except lie there and shiver on her bed as she's tormented.

The main plot in particular just doesn't do enough to separate it from all the other films of this type, nothing surprised me and there were no real stand out moments. The side plot of Elise regaining her lost confidence was a lot more enjoyable, her character was the most likable from the first two Insidious films so getting to see more of her was a great thing. Being a prequel it succeeds as not only does it give further background on her but also nods its head at both the first two films with a cliffhanger ending that leads into Insidious, as well as more background on the veiled 'woman' that haunts Elise whenever she enters the dark world. Comedy duo Tucker and Specs also turn up here once again, as always their characters are too over the top funny seeming at odds with the horror world they inhabit. They do have some great lines and it was interesting to see how they came to meet Elise but they just do not fit in what is otherwise a serious horror film. 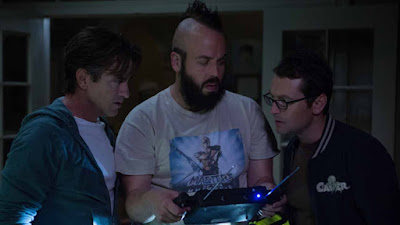 The main cast do a fine enough job but there are some dud actors, Quinn's brother Alex played by Tate Berney was not great, the best thing I can say about him is that he doesn't get much screen time. In fact he does so little, and adds so little that the film would have been no worse off if they had just written him out entirely. Special effects are not bad but they didn't really do much to stand out either while the score fits the films tone well but is not memorable.

I liked the idea of having a truly powerless heroine and that definitely made the scenes in the girls bedroom effective, I liked seeing more of Elise's past, but overall Chapter 3 just doesn't do enough to stand out. I enjoyed it and it is a better film than the second in the series but it is never going to be anyones favourite horror.

Posted by Daniel Simmonds at 10:40