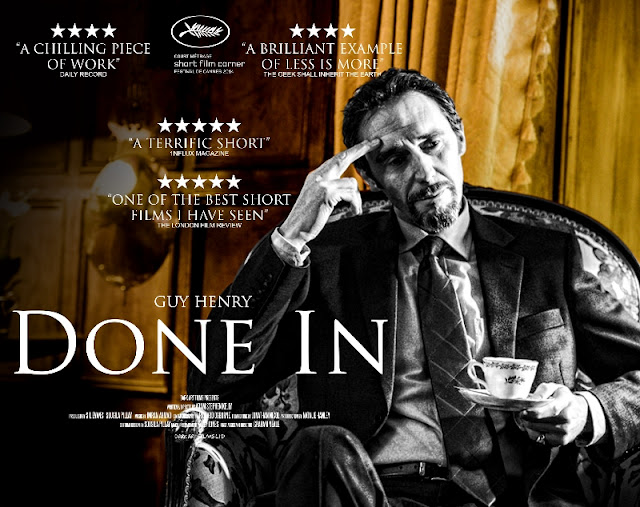 Dark Art Films' award winning short horror Done In is now available to watch online for free at Eli Roth's Crypt TV network, also I will imbed the film below. Due to the nature of this short I don't think I'm really going to be able to say much about it.

Guy Henry (Holby City, Harry Potter and the Deathly Hallows) stars as Harry and as Done In progresses you realise he is writing a suicide note. He talks about the life he had with his deceased wife and how no amount of money can replace losing the love of his life.

This short is eight minutes long, though with the credits not included it is pretty much a straight seven. What actually happens is mostly silent, Harry is sat down writing his suicide note, while he narrates what he is writing. In line with what he is writing his facial expressions change, he wonders around the ornate room he is in, looking at old photo albums while an old clock tick tocks away in the background, he very much has the image of a man preparing for the end. It is a very talky piece but it flew by at a rapid pace, I was engrossed by the letters words, Henry has such a calm, relaxing voice while some of the words in the note were actually quite beautiful and touching. Meanwhile there is such a sense of kindness and sympathy for the character that you can't help but like him.

The finale blew me away, I can honestly say I was not expecting that and so the power of the moment was intensified, to say any more would ruin it all. Done In was expertly cast, looks the part and was just plain superb, you should check it out below.

Sunday Shorts: Done In
A man writes a goodbye to the world.
Posted by Crypt TV on Sunday, 14 June 2015