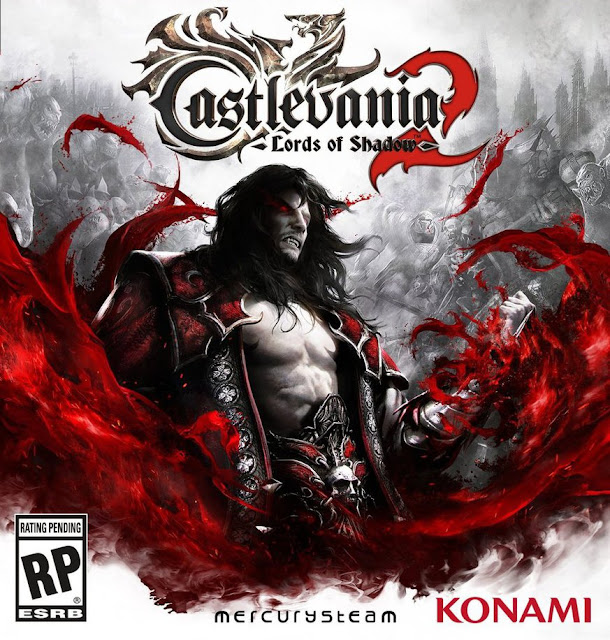 You play as Dracula (formally Gabriel) who in the prelude has his castle; Castlevania attacked by an army of the Brotherhood of Light. He manages to stop the attack but in doing so unleashes a power which destroys his castle and nearly destroys him. Awakening a thousand years later in the near future and severely weakened he discovers a giant city has been built around the remains of his home. Zobek; the Lord of Death and Dracula's long time enemy contacts him asking for his help. The acolytes of Satan have put in motion a plan to free him from Hell and so Zobek suggests an alliance to stop this from happening, in return he will kill Dracula freeing him from the torment immortality has given him. 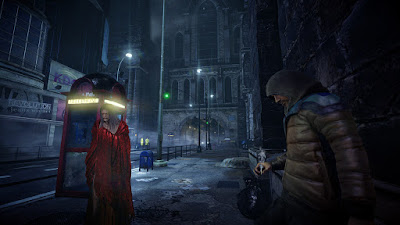 By setting the game in modern day Lords of Shadow 2 looses a lot of what made the first game so epic. Gone are the huge vistas and varied locations, instead the game is split between two wildly different areas. Half the game takes place in a city that is in a state of ruin, an early story beat sees a virus being released that turns the infected into demons and so the city is in chaos. The problem with the city is that it is mostly so dull looking, the first area in particular (a science facility) was so boring with it's metal walkways and narrow corridors, it was a terrible introduction to the game. With the combination of Gothic architecture and modern day aesthetic there is a kind of neo-Gothic look that occasionally shines, a subway tunnel built on the foundations of Castlevania, huge statues mixed in with phone boxes, neon signs and fire hydrants; these all go together well but the sheer amount of brown and grey ruined buildings, lifeless industrial areas and sewers just cannot compete with the imaginative design of the first games areas.

Thankfully the second half the game is a lot better being based in Castlevania (via Dracula's memory or some such thing). The castle is gigantic and there are many epic views when the camera pans away to show the scale of the place. Rather than have these two different locations one after the other they are mixed up with Dracula frequently hopping back and forth between the two. I liked how these areas both had their own stories going on. The city of course was about stopping Satan's arrival while the castle section had you trying to find a way to defeat 'Inner Dracula' a being made of blood who wishes to stop you from ending your life. 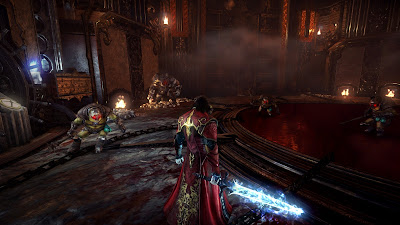 The game world is now all interconnecting rather than level based, there are map rooms that let you warp around the world, while as you play you get more and more abilities to let you get to previously inaccessible areas (such as a mist ability that lets you pass through gates). Hidden around the levels are upgrades for your weapons and health while killing enemies rewards you with XP that you can use to buy new attacks or spend in a shop to buy items.

In combat you have access to three different weapon types that can be switched on the fly. Your default weapon is a whip made out of blood, this is essentially the same weapon that you used in the first game. The first of the other weapons is the Void Sword which gives you health when you attack enemies with it, while it's projectile attack can be used to freeze objects for environmental puzzles. The other new weapons are the Chaos Claws that can be used to destroy enemies armour as well as used to blow things up (again for environmental puzzles). Combat is fun enough with many different combos you can do, while the evade button means you can zip around your foes a lot. Stunned enemies can be 'finished' which usually involves you sucking the blood of the stunned monster. 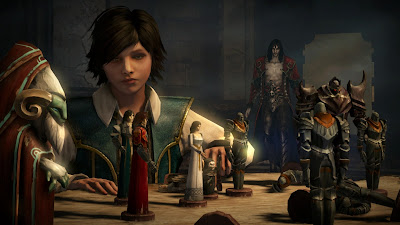 There is not such a large variety of enemies to fight for this sequel, demons of various sizes and styles seem to be the default creatures, at least in the city sections, you also fight human soldiers and mechs. Trying to dodge machine gun fire is rarely fun though. The castle sections give you more old school monsters such as vampires, harpies and skeletons to battle. Special mention has to go to the many bosses, these were all fun to fight and all ended with gruesome finishers, such as a sword being flung through someones mouth, or a huge creature being sliced in half vertically. I never found any of these boss fights to be taxing but they are usually multi staged and varied, one fight has you battling against someone with all your powers you had in the first game which was a nice touch.

Not everyone you meet in this game can be defeated though and this is what I feel a lot of people did not like. Stealth pops up quite a few times here, there are huge mechanical monsters who pretty much kill you on sight, to sneak past these you can throw a swarm of bats to distract, or at certain points you can turn into a pack of rats. Now I never really struggled at any of these stealth sections, they are inoffensive enough and not frustrating. 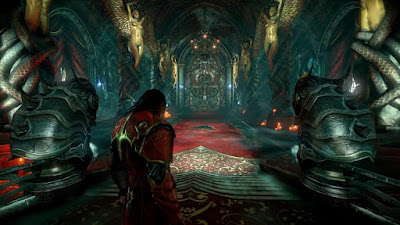 For me what sucked the most (pun not intended) was the archaic nature of the game, this felt like Darksiders to me, a game which came out the same time as the original game, the whole ruined world vibe and the way Dracula climbs around the environment, as well as demons being the main enemy type just gave me a nostalgic hit. Usually upon entering a new area the camera will pan around to highlight just exactly where you need to go, this is a very old fashioned way of approaching sign posting and made Lords of Shadow 2 feel very dated for a game just over a year old. Even with this sign posting there were times where I knew exactly where to go, I just couldn't for the life of me work out how to get there. It can be hard to tell what things are climbable and which are not, you can highlight climbable structures but bizarrely only if you are already climbing a structure, not before. Also some enemies have huge glowing weak spots; again something out dated in modern games.

For all the dull locations there are a few interesting sections; a long chase on a moving train, a theatrical play that you get to choose characters and scenes for, a Metal Gear Solid style sneaking mission all help break up the fighting and climbing. Meanwhile the plot is initially bare bones and very game like with Zobek or the memory of your son sending you on pointless fetch quests but later on there were actually some decent plot twists even if overall the plot is unsatisfying and features an abrupt and damp ending. I was pleased to see all the big name voice actors returning though; Robert Carlyle as Gabriel/Dracula, Patrick Stuart as Zobek, and Jason Issacs as Satan all reprise their roles, though they sound far less interested in what they are saying this time around. 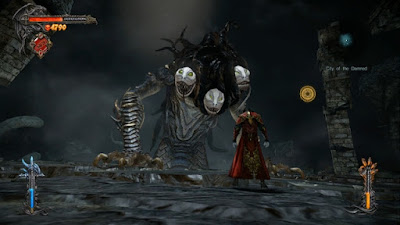 While it was not the first time I have played as a vampire in a game it was a nice change to play as more of a bad guy and there are some decent scenes which play on this concept, I really got quite into Lords of Shadows 2, there was a lot of fun to be had but this just all pales in comparison to the original. Nothing here matches aspects of that game, by moving the setting to a modern day setting a lot of the charm was lost, and the game mechanics already feel quite dated.

Posted by Daniel Simmonds at 11:57