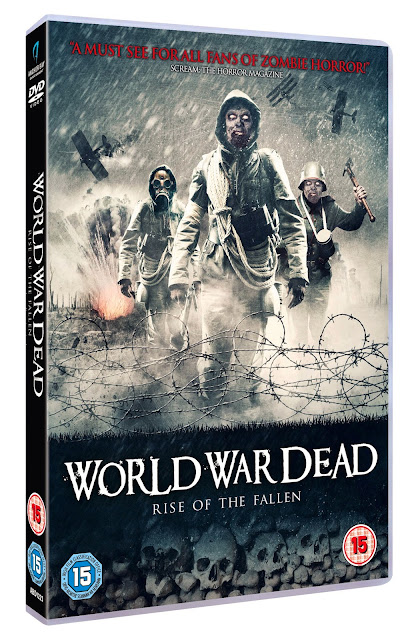 World War Dead: Rise of the Fallen is a found footage film which as I never get tired of saying can be a really boring genre of film to watch. However this time around it combines two of my favourite things; zombies and World War I.

A documentary team head to the Somme to make a TV show that hopes to explain the mysteries behind the terrible battle that raged there in 1916 during the first World War, however their investigation leads to the accidental release of an army of the dead and now they find themselves trapped in a modern day hell.

Nazi zombie films are quite a vibrant and unexpected sub genre, there have been a heck of a lot of media about this, everything from films such as Zombie Lake and Outpost to videogames like Call of Duty's zombie mode and Zombie Army Trilogy. Now I do realise World War I had no Nazi's in it, but the undead are still German soldiers and so still fit into the genre. I visited the Somme last year so would be good to see a film based on the location.

World War Dead was released on 4th May on DVD and BD and currently has quite a low score on IMDB, scores on there don't always mean everything but it can be hard to make a good found footage film, even in the zombie genre (such as Diary of the Dead which I recall wasn't too bad). It stars Ray Panthaki (28 Days Later) and Emma Washington (You're Next) so should at least offer some decent acting. I did enjoy the trailer, check it out below if you so wish...