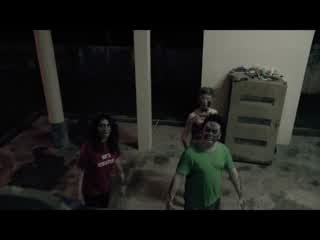 As I mentioned previously Abdul Zainidi (Ostrich Supernatural Game, Jentingkai) recently sent me two short horrors for review. Walking Bankai is the second of these and is a comedic homage to the zombie genre.

It takes place in 2017 and zombie apocalypse has come to the island of Brunei alongside a rice shortage. Three hungry friends have seeked shelter on a balcony. One of the friends starts begging for food, the other two seeing he isn't looking well decide to ignore his plea and instead shut him away in a house the balcony leads to as they fear he may soon become one of the walking dead.

At just six minutes long this is another very brief film, yet in this time there is enough set up that the situation feels authentic. It starts with a description of the predicament and so when the film starts proper you know what is going on. Some of the humour worked for me, some of it did not, the crux of the storyline fell a bit flat as the motivation of a certain character seemed a bit off. It also seemed a bit strange that a balcony was chosen as the safe place to be when surely the house itself would have been a better choice.

There are a few zombies here and all look passable, a really skinny boy in particular really seemed like he was one of the walking dead. The dialogue isn't bad, there are both English and French subtitles used which for some bits seem to fill up half the screen with text.

While the humour doesn't always work there is a lot of atmosphere on show here, it made me interested to see just what Zainidi would do with a feature length zombie film as the setting is perfect for a film about the undead.

Posted by Daniel Simmonds at 03:19