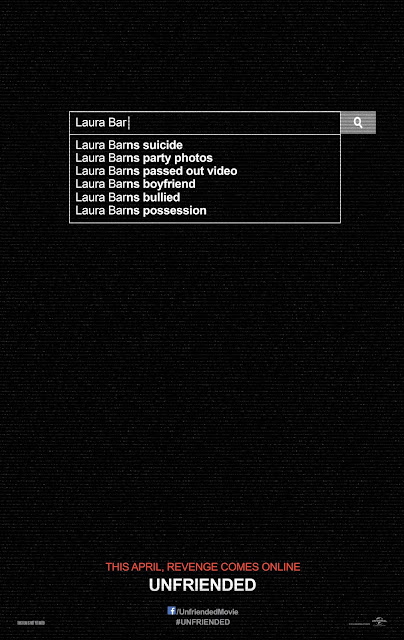 I felt it was my duty to see Unfriended when I saw it pop up on the list of films out at the cinema, I had never heard of it and upon reading that it was a film of the dreaded found footage genre I was not expecting anything remotely good. This is somewhat different to the norm as the entire film takes place on the screen of a teenage girls laptop, and it also takes place entirely in real time (and was even filmed in one long take!).

After an embarrassing video showed up online of teenager Laura Barns she kills herself, unable to live with the ridicule of her classmates. One year later and Blaire Lily is talking over Skype with her friends when she starts getting strange messages coming from the Facebook account of Laura, it isn't long before a mysterious sixth member of the Skype group she is in turns out to be using Laura's Skype account. The group at first think it is an internet troll who has hacked into the deceased girls profiles but things soon take a turn into the twilight zone for it seems that the actual explanation is something far more supernaturally sinister. Warned that if they end the Skype call they will all die the friends must confront their darkest secrets and hope to survive... 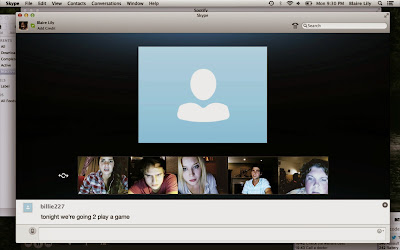 Unfriended is a terrifying film, for someone who is totally numb to the whole found footage genre I thought I had seen it all, that there was no new tricks that could be used but boy was I wrong. Before hand I wondered how a film that took place on a laptop screen would be interesting, let alone scary but the unrelenting pace of the real time event just left me reeling. Usually there are moments of light, times when the horror briefly ends (such as the day and night cycles of Paranormal Activity) but here when the horror starts it just goes on and on with the poor teens trapped in a cycle of terror that you as a viewer also feels trapped in.

The person controlling the events forces the teens to confront their dark secrets and in doing so causes huge rifts between the group, this in a way reminded me of the Saw films, though a much more psychological way than the torture porn of that franchise. The key event of the film is a 'have you ever...' drinking game the group are forced to play with the typed words of Laura's Skype account posing questions based on events from the friends lives and then giving an ominous countdown. The laptop used looks legitimate and includes among other programs and websites Skype, Facebook, YouTube and Yahoo. There is lots of screwed up stuff that happens with windows opening up on their own, music suddenly playing and photos and videos that shouldn't exist appearing to expose peoples dirty secrets. 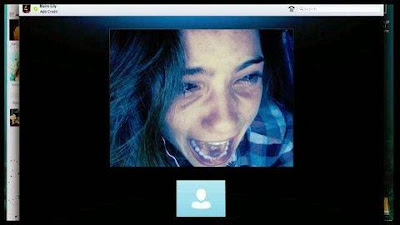 At times the laptop seems a bit too artificial, by this I mean that for a film that was made in 2014 the girls laptop sure makes a lot of old school noises (such as a noisy grinding sound when searching for things on a search engine), while opening up images and videos takes a fair old while which I am sure was used to build tension. It could just be that Blaire's laptop is ancient though. The idea is also not wholly original, there has actually been a found footage film that took place totally on a computer screen before (The Collingswood Story back in 2002) though that used the computer to show events external to the machine while in this about 95% takes place on screen. As for the plot, well Panic Button (2011) had pretty much an identical story of someone or something getting revenge for an online video that caused a suicide.

Despite some generic characters the acting is actually pretty good, especially considering the whole film was filmed in one long take which was a great discovery. Variations in the script for what could happen kept the actors on their toes meaning they got to improvise a lot. The written text on the laptop comes across as a bit artificial at times but all in all this is engrossing stuff. 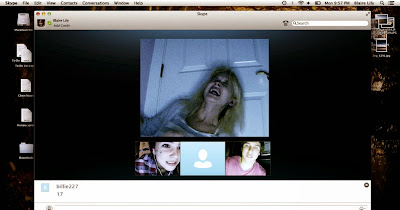 It is often said that what your mind conjours up is far more terrifying than anything that could actually be shown, here this is put to great effect as the Skype videos of each of the friends are constantly buffering, freezing, tearing and cutting out so when someone does die (and there are a fair few deaths) you only get to see the slightest glimpses of the method of death, a buffering sign followed by the briefest few insane seconds of someone with their hand being mashed up in a blender (for example) makes for a spooked out viewer. As Unfriended goes on more and more revelations are revealed and the victims start to appear less and less innocent all the way up to an effective but somewhat predictable end. There are some very clever mind games that play out, one in particular involving two printed out messages was very cool but to reveal that would ruin the surprise.

By two thirds of the way in tears of actual fear were streaming down my face; I was very scared indeed! In terms of reviewing this I am rating this based on the effectiveness of this as a horror film, not as a film I would ever wish to see again. If you really want to be scared then I suggest rather than see this on a huge cinema screen you instead watch it alone on a laptop, maybe pretend your part of the doomed Skype call. I was pleasantly surprised there is still life in the bloated found footage genre and despite some generic character types I still had a fun time watching this glimpse of the awfully titled cybernatural sub genre, though once you have seen it once the impact will be gone.

Posted by Daniel Simmonds at 08:59