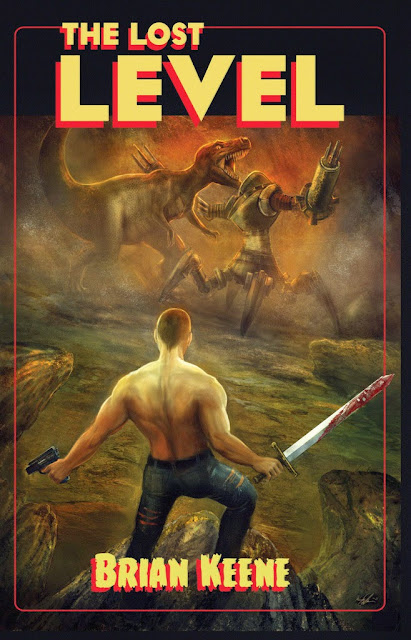 As anyone who has ever sent me an eBook for review knows I am terrible at getting around to reading the blasted things, I'm old fashioned in that if a book is not a book then I find it hard to get into. Brian Keene is mainly a horror author, I have read a few of his ace zombie books in the past (The Rising and City of the Dead) and while The Lost Level is not a horror title I felt confident enough I would actually get around to reading it.

Aaron Pace is an occultist whose research leads to him discovering the ability to summon doorways to alternate realities. He goes on many different adventures to these bizarre worlds until one day he discovers the place he has travelled to has got no exit, he has accidentally gone to a realm known as 'the lost level', a place that is said to be impossible to escape from. As he struggles to come to terms with his predicament he sets out in the hope of finding a way back home from this most bizarre world.

Keene wrote The Lost Level as a tribute to the lost world/man out of time genre of pulp fiction fantasy, as such it does read as very simple and without anything resembling depth. Having never read anything from this genre before I can only assume this is a accurate picture of what these books read as but I was at first disappointed before coming to accept it for what it was. The actual premise I found to be quite fascinating, the book itself is set out as a written recollection from an older Pace of his journey that led him up what appears to be a tragic end.

The realm he finds himself is in perpetual sunlight and features a complete mash up of different genre types with the premise of the lost level being that it is made up of things from every different type of dimension possible. There are dinosaurs battling robots, Nazi UFO's, a dying cowboy who speaks of a horrific zombie plague, monsters of different fantasy types, forbidden temples, alien abductions and reptilian pursuers, really everything but the kitchen sink is included here. These different elements usually end up with a chapter to themselves each which makes it seems like a giant check list of different ideas but also help in keeping you never knowing what is around the corner.

The actual plot is quite simple with Pace befriending a woman named Kasheena after rescuing her from a roving band of evil reptiles. They, along with a Chewbacca type creature they name Bloop go on a journey to get to the woman's village where she suggests the village Shaman might hold the answer to escape the world. There really is not much more to it with the three main characters being under developed but again I assume this is a facet of the genre. Pace has little of the book that explains his past, it is glossed over how he  came to get the weirdly useful skills he has that lets him be the hero of the story (with certain flaws), while the love story that blossoms between him and Kasheena is cheesy and predictable but again I am sure it is a facet of the genre.

While as stated (many times) I do not know the genre what I do know is that Keene is a great writer so based on that knowledge I am confident that any complaints I have are due to the fantasy elements rather than his skill. There are many enthralling moments in The Lost Level, I loved the mash up of different elements, as well as comments relating to real world phenomena such as the Bermuda Triangle and the Philadelphia Experiment., while the initial panic Pace has when he realises he is trapped is tangible.

Overall as a tribute this book works well, for me personally though I just found it all a bit too simple and cliched for it to really keep my attention. Saying that there are a lot of good well written ideas here and with a sequel and prequel also planned I would not be adverse to revisiting this strange world.

Posted by Daniel Simmonds at 08:10