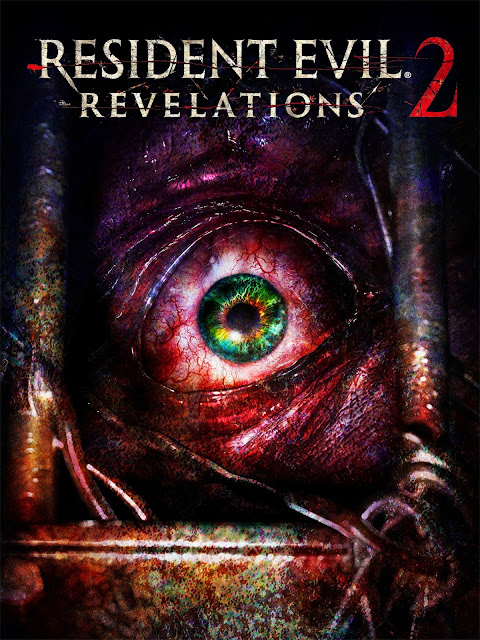 After hearing just how good Resident Evil: Revelations 2 was I hurriedly finished my play through of the 3DS original game in the Revelations series. This sequel was released in four parts initially, each part containing two different chapters making up a total of ten (including two bonus chapters that were rewarded for buying all four chapters).

Set between the events of Resident Evil 5 and Resident Evil 6 Claire Redfield and Moira Burton are at a party for Terra Save; the group they work for. The party gets crashed by armed soldiers who kidnap Claire and Moira as well as injecting them with some strange concoction. The two women wake up in cells at an unknown location where they are soon on a quest to find a way off the island they have found themselves trapped on. Six months later and Moira's father Barry Burton arrives on a search and rescue mission, he soon meets a strange little girl called Natalia who decides to join him. 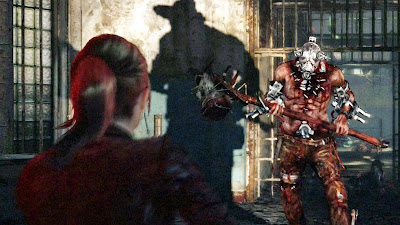 The first episode was roughly an hour and twenty minutes in length, after being spoilt with the length of The Evil Within's DLC I at first worried that there would not be value for money here, yet at £20 I got over eight hours of story and that doesn't even include the Raid Mode which is a series of missions that can be played with a variety of characters who can level up. The Raid Mode levels are mostly taken from areas of Revelations 2 but also include some revisits to places from Resident Evil 6. This game looks great, the graphics are solid and after the letter boxing of The Evil Within it was great to see full screen with large enemies and characters.

As usual for modern Resident Evil games you spend the vast majority of the game with an A.I partner tagging along, this is designed for two players but if you are alone you can switch between the two at will. Claire and Barry are traditional in that they can arm themselves with a variety of weapons, but Moira and Natalia are more support based characters. Moira has a torch which can be used to blind enemies as well as find hidden items in the levels, she also has a crowbar that can open locked boxes and doors. Natalia can detect the presence of nearby enemies as well as point out hidden items and open treasure chests, while her small size means she can climb through narrow holes. For the most part the A.I does it's job quite well though on occasion they did get stuck on scenery which was mildly irritating. 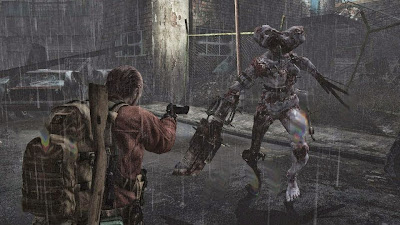 I was pleased to see that many of the enemies you fight were zombies, or at least humanoid in appearance. The undead are split into a few different types, more human looking ones use weapons and can chase you down, while more decayed ones look like the undead from Italian zombie films of the 1980's which is not a bad thing at all. There were a fair few enemy types that had glowing weak spots that had to be destroyed but the best ones were large invisible bugs that could only be seen by Natalia, shooting into empty space based on her desperate shouts was something quite original that I had not seen in a game before. The monsters are fun to fight, this is helped by the weight your weapons seem to have, gunshots feel like gunshots, and while there is nothing too graphic you can do to the ghouls head shots will still incapacitate. There are a whole range of bosses to fight here, many do later show up as regular enemies but the final boss in particular is a joy to fight and feels suitably epic.

There are quite a variety of locations used but for the first two episodes Barry's levels took him over old ground, I was worried that this is all he would be doing for the game but towards the end of episode three and for all of episode four he gets entirely new locations. The game takes place on a small island but there are many different areas including old favourites such as sewers, mines and villages that called to mind Resident Evil 4 while some of the more interesting places included a slaughterhouse, a creepy cave full of dismembered children's dolls and an underground mansion that was a huge burst of nostalgia. There are in fact many nods and winks to previous games with characters even mentioning things from the very first Resident Evil game. Being a sequel to Revelations there are a few mentions of that but nothing so drastic that it would ruin your enjoyment. Where that was a convoluted mess this one is a far more straight forward story and is all the better for it., there are plenty of revelations and half the game being set six months in the future was an interesting plot device to play around with. 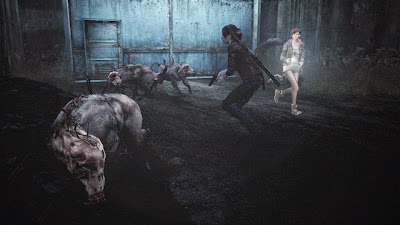 Mostly this is survival horror and feels classic in tone even if it does stray into straight action on a few occasions, usually where you have to survive waves of enemies while waiting for a lift or an event to happen. There are a few simple puzzles throughout, these usually just involve finding a crate to use as a platform though. Some of the locations almost feel Silent Hill in tone which was something that actually worked well, the second bonus chapter; stealth based Little Miss went as far as to have the whole chapter shrouded in thick mist with the only enemy types being the most Silent Hill looking ones. The other bonus chapter The Struggle was full of story but was mission based and not too interesting.

Resident Evil: Revelations 2 works well as a chapter based game, far better than the first one did, it is a fun time, looks the part and moves along at a fair old pace. It would have been better if half of Barry's levels didn't take place in the same locations, and as always files you find dotted around the levels could have been more interesting to read. This never gets stale though and I was hooked throughout, set pieces such as an exploding factory and crumbling tower kept things interesting and for me personally hearing so much swearing in a Resident Evil game was a novelty. Raid Mode was a bit boring but it is an extra anyway and certainly increases the value for money. If your after a decent modern day survival horror then this is the place to be, just don't expect to find anything scary here.